The Iron Bowl is always marked on college football fans' calendars. Despite disappointing seasons from both programs, find out why there's still a clear betting edge on Saturday in Tuscaloosa. Read more in our Auburn vs. Alabama betting picks. 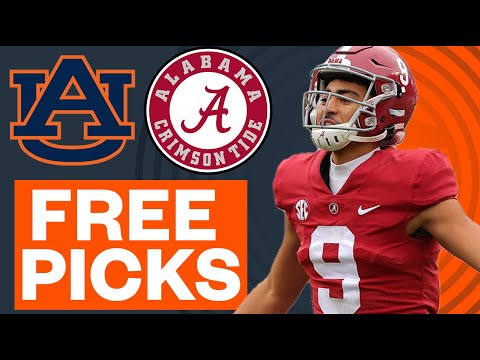 Rivalry weekend wouldn’t be complete without the Iron Bowl.

It’s been a season to forget for both programs, as Auburn (5-6) needs a miraculous upset victory to become bowl eligible, while Alabama (9-2) appears to have fallen short in their “championship or bust” aspirations.

Does that make this rivalry any less fierce? Of course not! This matchup is appointment television for college football fans regardless of the records of the teams involved.

Check out our free college football picks and predictions for Auburn vs. Alabama on Saturday, November 26.

Auburn vs Alabama picks and predictions

It tells you a lot about the respective state of these programs that both would likely consider the season a failure, albeit for drastically different reasons.

Bryan Harsin didn’t even make it through his second season at the helm of Auburn before his dismissal, leaving Cadillac Williams as the interim coach. For a program that believes it should be on par with Alabama, simply making it to a bowl game is a long shot at this point.

As for the Crimson Tide, two losses likely eliminate them from the College Football Playoff picture, which can be termed a failure for a program that hopes to compete for the title on an annual basis. There’s still an outside chance the Tide sneak their way into serious consideration, although that would require quite a few dominoes to fall correction over the next two weeks.

Still, this figures to be a hotly contested rivalry game and one that could surprise on rivalry weekend. Does Auburn stand a realistic chance as +22.5 underdogs?

It’s been a dismal season in every sense of the word for Auburn. The offense has been stagnant, failing to find an answer at the quarterback position while placing their faith in dual-threat Robby Ashford, an Oregon transfer completing just 49.3% of his passes for 6.8 yards per attempt while tossing more interceptions (7) than touchdowns (6).

The Tigers have not reached 375 yards of total offense in each of its last three games. The defense has been solid if unspectacular, ranking 51st in EPA (Expected Points Added) and 55th in Success Rate.

Alabama, meanwhile, has failed to find the heir apparent at the receiver position. DeVonta Smith isn’t walking through that door, and Jameson Williams isn’t on the sideline, either. Not a single Crimson Tide wideout has eclipsed 800 yards this season, causing reigning Heisman Trophy winner Bryce Young’s passing yards per game to drop from 324.8 a year ago to 266.4 this season.

There was some concern healthwise for the Crimson Tide. Still, that unease was assuaged with good news from Nick Saban about running back Jahmyr Gibbs (1,144 scrimmage yards, 9 touchdowns), who was expected to return to practice Monday, and cornerback Eli Ricks, who cleared concussion protocol.

Auburn’s offense should struggle mightily to move the ball against an elite defense. The Tigers have faltered at numerous points this season, posting 24 points against San Jose State, 12 against Penn State, 17 against both Missouri and LSU, 10 against Georgia, and 13 against Texas A&M.

Alabama's defense has played at a high level for most of the season, and this is a great chance to end the season with a stamp.

At most sports books, the spread is currently set at -22.5 in favor of Alabama. Will this game be like last year, when Auburn pushed Alabama to the brink in a 24-22 win by the Tide in four overtimes, or will it be a blowout as the odds indicate?

Alabama hasn’t quite put it all together this season, notching too-close-for-comfort victories over Texas, Texas A&M, and Mississippi while losing to both Tennessee and LSU. Still, the Tide haven’t been overvalued in the market lately, going 4-1 ATS in their last five games after a slow start to the year from a bettor’s perspective.

Still, the Tigers will struggle to go score-for-score in this matchup as they’re going up against a tough task in cracking Alabama's defense. Ashford will not be put in easy situations thanks to a brutal offensive line and mediocre-at-best receiving room, whereas Auburn's defense limiting Bryce Young for a second straight season seems like a tall task.

The total is set between 49 and 49.5 at the time of this writing. Auburn has been a profitable 7-4 to the Over this season, while Alabama has been the inverse at 4-7.

There’s no sugar-coating how bad Auburn has been on offense. Despite having two great backs in Tank Bigsby (1,283 scrimmage yards, 10 touchdowns) and Jarquez Hunter (654 scrimmage yards, 4 touchdowns), the Tigers have mustered just 24.5 points per game. They rank 106th in Success Rate, thanks primarily to a woeful offensive line checking in at 108th in Line Yards and 126th in Stuff Rate.

Alabama remains effective on both sides of the ball from a numbers perspective. The Tide rank 20th in EPA per play offensively and seventh defensively, indicating where the true strength of this team lies. Arguably the strongest part of the team is a front seven led by one of the best players in the nation Will Anderson Jr. The Tide rank 12th in Stuff Rate and should overwhelm this Tigers attack.

Despite having Bryce Young and talented backs Jahmyr Gibbs and Jase McClellan to lean on, the Tide are just 33rd in Success Rate due to a struggling offensive line that has been the bane of their existence.

The Under seems like the correct side in this spot.

The Under is 8-3 in the last 11 meetings when played in Tuscaloosa. Find more NCAA betting trends for Auburn vs. Alabama. 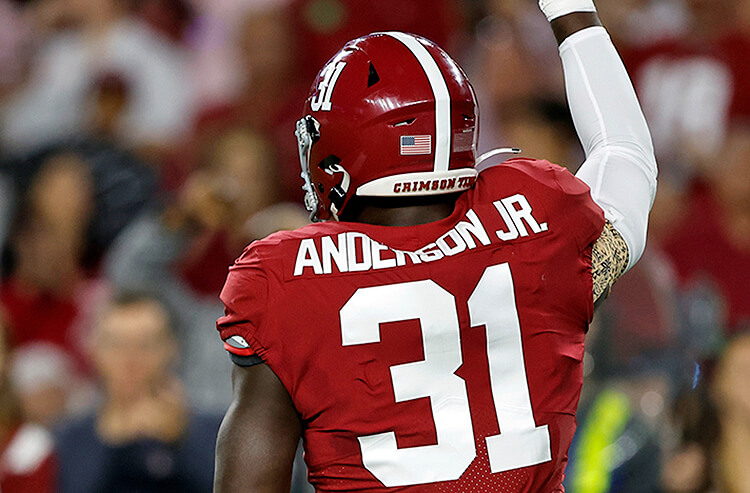