Texas vs Seton Hall Picks and Predictions: Pirates Will Be Culture Shock For Longhorns

Texas may be the higher-ranked squad coming into this matchup with Seton Hall, but our preview suggests the Pirates are well-equipped to take on the No. 7 Longhorns at home. Read why in our Texas vs. Seton Hall picks and predictions.

The Texas Longhorns will head on over to Newark, NJ to take on the Seton Hall Pirates in the Big East-Big 12 Battle at 6:30 p.m. ET on Fox Sports 1.

We’ve got two ranked teams playing an early game on Thursday. It doesn’t get any better than this. Seton Hall has faced tougher competition to start the season, with wins over Michigan, California, and Wagner. The Pirates also lost a game to Ohio State on a neutral court, but that Michigan win has been their signature win thus far.

Meanwhile, Texas hasn’t played anyone special. The Longhorns lost to Gonzaga but since that Gonzaga loss on the road, Texas has faced a bunch of teams below KenPom’s Top 150.

Therefore, it seems like Seton Hall is the more prepared team coming into this game. Here are our picks and predictions for the Big East-Big 12 Battle between Texas and Seton Hall.

Pirates are 4-1 ATS in their last five games following a SU win of more than 20 points. Find more NCAA betting trends for Texas vs. Seton Hall.

The Texas Longhorns haven’t seen much defense this season. Outside of Gonzaga, Texas has been able to stay home and play some really bad teams.

Tonight, at Seton Hall, will be a bit of a culture shock to Texas. Texas, when on the road against Gonzaga, lost 86-74. That was their lone road game of the season until today.

Seton Hall, on the other hand, has played four teams in the Top 150 via KenPom, with three wins and one loss to Ohio State on a neutral court.

Texas has been fantastic offensively this season. The Longhorns are shooting a 51.7% effective field goal percentage while hitting 39.4% of long-range shots and 55.8% of shots inside the arc.

The Longhorns have also cleaned up the glass well, earning 34.7% offensive rebounds while limiting turnovers and getting to the line at a high rate. But everything Texas does, Seton Hall does better on the defensive end.

On top of that, Seton Hall has excelled at defending the three, as opponents have shot just 26.8% from long range. Inside, against Seton Hall, opponents haven’t had much success either, scoring just 44% of shots inside the arc.

Meanwhile, on the other side of the ball, Seton Hall limits turnovers well and should be able to get to the line at a higher rate than Texas. The Longhorns are very capable of earning steals and if Seton Hall must play without guard Brady Aiken, it could be a slight struggle. The Longhorns have earned 28.9% turnovers on the defensive end, but they’ve also struggled on the glass defensively.

The Longhorns are allowing 30.3% offensive rebounds on the year, giving Seton Hall a realistic chance at earning more second-chance opportunities. Texas is one of the best teams in the nation when it comes to forcing turnovers. However, against Gonzaga, for example, Texas only forced Gonzaga into seven turnovers in the entire game.

Texas had been feasting off bad teams. Seton Hall is disciplined enough to limit the turnovers on the offensive end. Therefore, I’ll grab Seton Hall at +2 in this spot, at home.

The Texas Longhorns have an adjusted efficiency on offense of 113.2, which is 17th in the nation. They’re capable of shooting quality shots and scoring plenty of buckets.

However, against Seton Hall, it’s all going to be much more challenging. Everything Texas does well offensively, Seton Hall can do well on the defensive end.

While Seton Hall loves to get out on the break, if the Pirates move too fast, they’ll wind up turning the ball over. Look for a balanced attack from Seton Hall and a good enough one to win. But I don’t like Texas’ chances when it comes to scoring at a consistent pace. Therefore, I’ll grab the Under.

I’m sticking with Seton Hall as my best bet for the game. It’s never easy playing Seton Hall on the road and Texas is about to experience just that. The crowd is going to be loud and sold out and Seton Hall is going to play lights out on defense like they have all year.

If Seton Hall can limit turnovers and dominate the glass, the Pirates should be able to pull tonight’s game out. 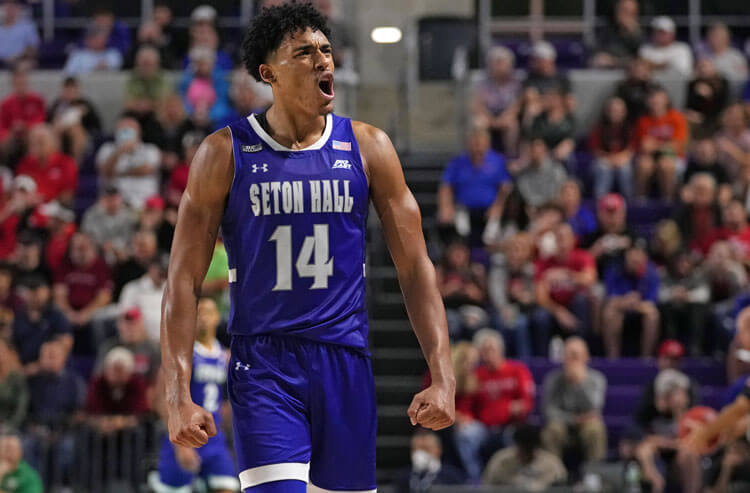 Texas vs Seton Hall Picks and Predictions: Pirates Will Be Culture Shock For Longhorns
Provided by