The Cyclones have quickly become one of college basketball's best early season stories, and they get another chance to show out against a rival Iowa squad as 4.5-point home dogs. Read our betting preview to find out if they can stay within the number.

It’s been quite the turnaround for Iowa State this season. Under T.J. Otzelberger, Iowa State is 8-0 to start the season with quality wins against Xavier, Memphis, and Creighton.

It’s rare to see such improvement from a team so quickly. It’s been a great start but if Otzelberger really wants to win over Iowa State fans, he has a huge change tonight, facing the Iowa Hawkeyes on ESPN2 at 9 p.m. ET at home.

The Iowa Hawkeyes started the season 7-0 but have lost two straight in Big Ten play to Purdue and Illinois. Both of those losses are reasonable, and the losses were within range. However, Iowa could still drop three straight with another loss tonight. That wouldn’t be great knowing Utah State is up next on the schedule.

Here are our picks and predictions for the big rivalry game between Iowa Hawkeyes and Iowa State Cyclones.

The Iowa Hawkeyes opened as a 2-point favorite but have been bet up to as high as -4.5 at some outlets. Meanwhile, the total has seen less line movement after opening at 151. At different outlets, 150.5 is available along with 151 and 151.5.

Cyclones are 5-0 ATS in their last five games vs. teams with a winning % above .600. Find more NCAA betting trends for Iowa vs. Iowa State.

You guys know I love my underdogs at home. However, tonight’s a tough test for Iowa State. So far, everything has worked out perfectly for Iowa State, and I, along with plenty of other college basketball fans, want to see Iowa State’s success continue. It’s a very cool story and deserves more recognition.

The Cyclones have been terrific on the defensive end and that could keep the Hawkeyes off the scoreboard a little bit. The Cyclones have allowed teams to shoot just a 44.1% effective field goal percentage while limiting teams to just 26.5% from three. Teams are also shooting just 46.7% from inside the arc as well.

The one area that could make a big difference in this matchup is the turnover battle. Iowa is limiting turnovers to just 10.9% on the offensive end while Iowa State is forcing turnovers 27.2% of the time. I’d have to imagine Iowa turns the ball over more than 10.9% of the time in tonight’s game, on the road, against a sneaky Iowa State team that has been terrific defensively.

The Hawkeyes are shooting 37.6% from deep and 55.6% from inside the arc. Iowa has all the offense they’ll need and if they’re able to sell it, the Hawkeyes will more than likely find themselves at the line plenty against Iowa State. However, second chances won’t just come around every possession.

Meanwhile, Iowa State is just an average offense taking on an average Iowa defense. Iowa State is still shooting 35.1% from deep and 50.6% from inside. That’s going to be more than enough if the defense holds up against Iowa and forces turnovers.

The Hawkeyes are not great on the defensive glass, which is another area where Iowa State can find some opportunity.

The reality is, Iowa is extremely deep and is playing their bench at an abnormally high rate. Iowa State, despite most of these players not playing for the team last year, has way more experience and has shown early on this season.

It’s going to be a close game throughout, but if Iowa State is able to stay aggressive on the defensive end and continue dominating on the glass, they’ll have a chance at pulling off an upset, at home, against an Iowa team that has lost two straight.

Ultimately, I really like the Cyclones and what they’ve brought to the table defensively. However, the Hawkeyes will find their way to the line at a high rate in this game. So, while Iowa’s shooting percentage might be a bit lower in this game, the Hawkeyes can get to the line and score points with the time stopped.

Meanwhile, Iowa State is still shooting 35.1% from downtown and over 50% from inside the arc. If shots are missed, I’d be more confident in Iowa State when it comes to offensive rebounding.

The total is already high as it is, but with Iowa playing at a fast pace on the offensive end, I’d still take the Over.

As the day goes on, Iowa State could become a heavier underdog than just +4.5. The more points you get, the more this bet makes sense. Iowa State is undefeated on the season and has three wins against Top 100 opponents.

Throw last year out the window. This team is completely different with plenty of experienced talent and a new head coach. Iowa State beat Xavier, Memphis, and Creighton all by multiple possessions along with Oregon State earlier in the season. 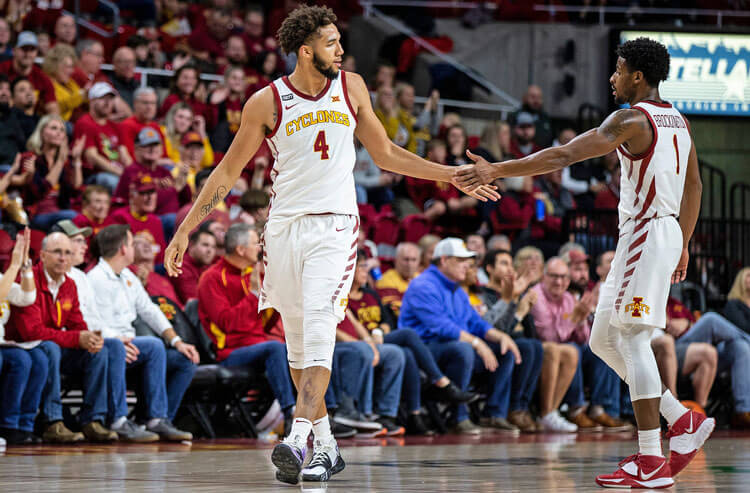 Iowa vs Iowa State Picks and Predictions: Can Improved Cyclones Squad Slow Down Iowa?
Provided by