The No. 15 and No. 16 ranked teams in the country collide in Norman on Thursday night, as the Texas Longhorns take on the Oklahoma Sooners in Big 12 action.

Here are our best free Texas vs. Oklahoma picks and predictions for Thursday, March 4, with tipoff at 9 p.m. ET.

Texas: None.
Oklahoma: None.

The Over is 12-3 in the Longhorns' last 15 games overall. Find more NCAA betting trends for Texas vs. Oklahoma.

Oklahoma opened as a 2-point home favorite Wednesday afternoon at FanDuel, moved to -2.5 this evening, and the line is back to the -2 opener at 8:30 p.m. ET, 30 minutes before tipoff. The Sooners are attracting 59 percent of point-spread bets and 62 percent of point-spread money. The total is up to 144 from a 142 opener, with bettors overwhelmingly on the Over, to the tune of 92 percent of bets/95 percent of cash.

Although both these teams have played well this season, they have been brutal against the spread lately. The Longhorns are just 5-6 SU and 2-8-1 ATS in their last 11 games, while the Sooners have lost three in a row and are 1-5 ATS in their previous six contests.

These Big 12 rivals collided on January 26 with Oklahoma eking out an 80-79 win on the road as a 3-point underdog. Another tight game should be expected considering how similar these teams are across the board.

With such similar analytics and such a close battle in their previous matchup it's tough to find an edge here. That said, the Sooners do have a few advantages beyond getting to play at home.

Oklahoma is very careful with the ball, ranking 19th in the nation in turnovers per possession. Texas ranks outside the Top-200 in that category. The Sooners also rarely foul, ranking 16th in fouls per defensive play while the Longhorns sit outside the Top-300.

When you combine that with the fact that Texas shoots 69.8 percent from the charity stripe, compared to Oklahoma's free throw percentage of 74, you have what could be the deciding factor in a close game. Back Oklahoma.

These teams combined for 159 points when they met up in January, which is interesting because they shot a modest 43 percent from the field, including just 25 percent from long range.

While streaky shooting could be an outlier, putting up that many points when neither team had a hot hand is a good indication that they will play at a faster pace against each other.

Shaka Smart's squad has plenty of scoring depth, with four players averaging over 10 points per game. The Longhorns have gone a commanding 12-3 to the Over in their last 15 games. They're also coming off a strong offensive performance on the road where they scored 81 points on 51 percent shooting.

The Sooners also have four players averaging double-digits led by Austin Reaves and his 17.6 points per game. They put up 80.2 ppg at home and have gone 5-2 O/U in their last seven games against teams with a winning percentage above .600. Back the Over. 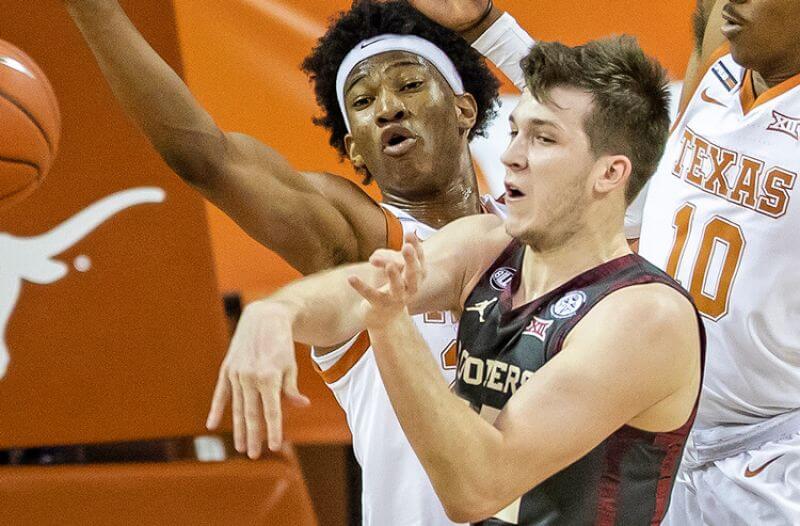 Texas vs Oklahoma Picks: Longhorns Look for Revenge
Provided by