The Cyclones have faltered in conference play so far, and Saturday they face another Big 12 foe who can bring it on both sides of the ball. Find out why we're backing the Lone Star with our Texas vs. Iowa State picks.

The Iowa State Cyclones started the season with 12 straight wins. However, Iowa State has now dropped three of its last four games and will now take on another tough test, at home against the Texas Longhorns.

The Cyclones can no longer feast on a non-conference slate and instead have to play a gauntlet in the Big 12. So far, the Cyclones haven’t been able to hold up, although they lost by just one point to Kansas, on the road, Tuesday.

Will Iowa State get a win against another elite Big 12 team? Here are our college basketball picks and predictions for Texas vs. Iowa State on Saturday, January 15.

The Longhorns have been without center Tre Mitchell in their last two games. But there’s potential that he returns to action in this game against Iowa State.

That should help on both ends of the court, as he’s contributed over nine points and four rebounds per game in 19.1 minutes a game.

Offensively, Texas is shooting an effective field goal percentage of 52.6% while also turning the ball over just 16.8% of the time. The Longhorns are very capable of dominating the offensive glass, earning 32.9% offensive rebounds on the season.

From long-range, Texas is hitting 33% of looks and from inside, the Longhorns have shot 54.3% on the season. But offensively, it’s going to be a challenge going up against Iowa State’s defense.

The Cyclones have held opponents to a 44.7% effective field goal percentage while also earning 26% turnovers on the season. Because of the aggressiveness by Iowa State, the Cyclones will send teams to the line at a high rate, but that’s the price they’re willing to pay.

On the other hand, Iowa State has struggled on the offensive end. Despite having an effective field goal percentage of 51.2%, Iowa State has turned the ball over 20.5% percent of the time. Therefore, those turnovers that the Cyclones earn don’t mean as much.

The Cyclones have also hit 34.3% from three and 51% from inside the arc. These are above-average numbers, but nothing more than that. Plus, Texas is just as good of a defense as Iowa State.

The Longhorns have earned 26.7% turnovers on the season and have held teams to a 44.6% effective field goal percentage.

Both defenses have been spectacular this season, but I’d rather roll with Texas in this game. The Longhorns have the much more consistent offense and while it’ll be a challenge on the road, Texas and all other Big 12 teams better get used to playing challenging road games.

Both defenses are capable of forcing a whole bunch of turnovers and Texas loves to play in the half-court and waste time on the offensive end. The Longhorns have used 18.6 seconds per possession this season, which is 308th in college basketball.

I know the total is already extremely low, but scared money doesn’t make money. Take the under 121.5.

I’m sticking with Texas -2. We already know that lines are starting to shift to -2.5 in the first place. On top of that, both defenses are stellar, but only Texas has the consistent offense in this game.

It’s going to be tough on the road, and Iowa State certainly has an advantage in that regard, but with Tre Mitchell potentially returning the lineup for the Longhorns, Texas is in good shape for this road tilt against Iowa State. 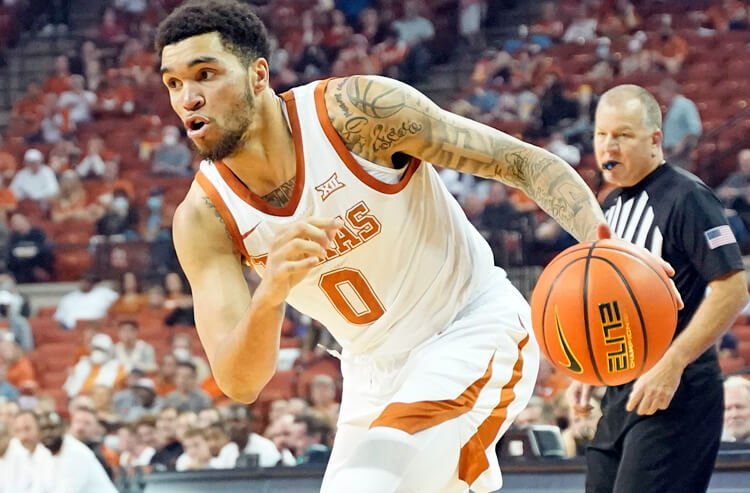