Tennessee vs Kentucky Picks and Predictions: Wildcats Put Vols in Their Place

The Wildcats are motivated to come out strong today, and we think the books might be giving a tad too much credit to the Vols' defense. Find out if it can contain such an imposing offense with our Tennessee vs Kentucky picks.

The No. 22 Tennessee Volunteers will get their third crack at a road win against a ranked opponent on Saturday when they tip off against the No. 18 Kentucky Wildcats. Their first two attempts were not fruitful, dropping games to No. 19 Alabama and No. 21 LSU. On the other hand, Kentucky is coming off of its first road win of the season and is looking to keep the ball rolling, winning six of its last seven.

Continue reading for our free college basketball picks and predictions for Tennessee vs. Kentucky on Saturday, January 15th for more.

Kentucky opened as 6-point favorites. The total opened at 143 and has since moved to 142.5.

Tennessee vs Kentucky picks and predictions

No. 19 Kentucky's win on Tuesday against Vanderbilt could quietly be one of the bigger turning points for the Wildcats' season. The matchup featured one of Kentucky's toughest offensive matchups stylistically, and it prevailed with a resounding 78 points en route to its first win in a true road game.

Oscar Tshiebwe had a career-high 30 points in that game, and continues to lead that Wildcats offense with his 17.1 points per game and his nation-leading 15.1 rebounds per game. In particular, Tshiebwe is an absolute bully inside, making 84% of his shots at the rim. Outside of that, Tshiebwe and TyTy Washington (13.7 PPG) also present the threat of creating quality jumpshots in the midrange, which helps keep defenders honest. Washington is also proficient from outside (40.4%), and Kellan Grady is even better on higher volume (45.4% on 6.3 attempts per game).

Saturday's challenge has them facing off against No. 22 Tennessee, who is widely known for its elite defense which ranks second in the country according to KenPom. But there are serious questions on whether or not Tennessee has earned that "elite" tag. Teams like Villanova (7th in KenPom offensive rankings), Alabama (9th), Arizona (14th), and North Carolina (15th) have all put up 70+ against the Volunteers. Kentucky ranks eighth in KenPom offensive efficiency, which spells trouble for the Vols.

On the other side of the ball, Tennessee is a manageable matchup for Kentucky. The Vols generate a good amount of offense in transition, largely off of the 10.7 steals per game they generate (7th in the nation). In the halfcourt, they spend the vast majority of their possessions chewing up the shot clock looking for an open three (25th in  3-point attempts). They aren't particularly impressive at making those shots, shooting just 32.1% (248th).

Kentucky allows just 30.1% from deep, which ranks 60th in the nation. Tennessee also generates a good chunk of scoring off of offensive rebounds (12.1 per game ranks 39th) but Tshiebwe and the rest of the Wildcats are more than equipped to keep that at bay, ranking 15th in defensive rebounding and allowing just 7.4 offensive rebounds per game (24th).

Tennessee is hardly one to push the pace. Just 25.4% of all of its shots come in transition, which is low (ranking 123rd in the nation) given how often it steals the ball. On top of that, Kentucky isn't one to be overly prone to coughing up the ball, averaging just 11.7 turnovers per game - the 69th fewest in the nation.

Elsewhere, for as much of a presence Tshiebwe is at the rim, Tennessee is somewhat up for the challenge. Tennessee does allow 39.1% of all shots to be taken at the rim (83rd-most) but allows just 51.4% on those shots -  the 23rd lowest percentage in the nation. Obviously, Tshiebwe is more than just another guy taking shots at the rim, but if we envision how the matchup may look, it could be that Kentucky grinds the ball down low but Tennessee is able to prevent the Wildcats from pouring it on over the course of the game.

Make no mistake, Kentucky will find their points. But it won't be a boat race.

Even if Tennessee can slow down Kentucky's offense, it may not matter. Tennessee's signature defensive performance this season was against Texas Tech (who rank 51st in KenPom offense), who needed overtime to score 57 points. Tennessee still lost that game.

But even suggesting Tennessee could slow down Kentucky's offense in a meaningful way seems like a useless thought exercise, as Kentucky simply has too many ways to win on offense. Tshiebwe obviously gets his inside, but he's also creative from the midrange. TyTy Washington also has that capability, but can also stretch it outside. Kellan Grady is even more dangerous from outside both efficiency- and volume-wise.

To make matters worse for the Vols, Sahvir Wheeler (10.7 PPG) is probable for Saturday's game after being out since January 4th. He would add another wrinkle, as he attacks the rim in a much different way than Tshiebwe as a hyper-athletic guard.

That is simply too much for a mislabeled "elite" Tennessee defense. 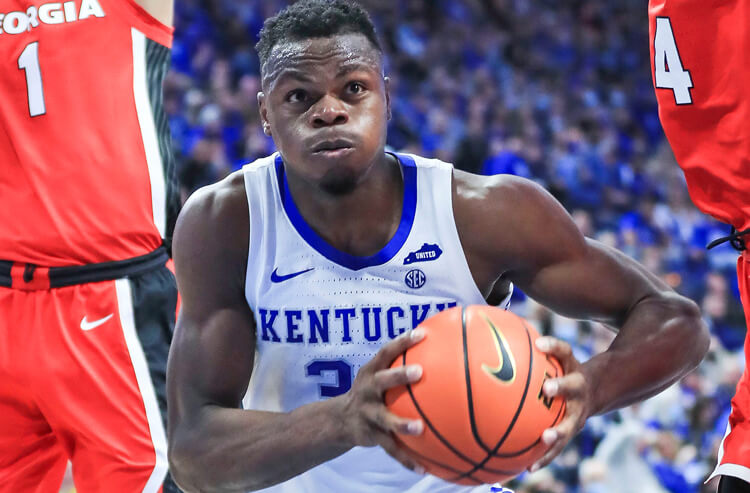 Tennessee vs Kentucky Picks and Predictions: Wildcats Put Vols in Their Place
Provided by