Oregon State vs California Picks and Predictions: Bears Prove to be Golden

Points will be hard to come by in this Pac-12 clash between the Beavers and Golden Bears, so which side will make the most of a scarce resource? Find out as we break down our college basketball picks for Oregon State vs. California.

The Oregon State Beavers take on the California Golden Bears Thursday in what will be both teams’ first conference game of the season. California is coming off a win against Fresno State and already has wins against Southern Utah and San Diego.

Meanwhile, Oregon State is 1-6 on the year and have just one win against Portland State. Since that win, the Beavers have lost six straight games.

Here are our college basketball picks and predictions for the only Pac-12 matchup tonight between the Oregon State Beavers and California Golden Bears.

California opened as a 2-point favorite and currently, that line has been bet up to -2.5 at most outlets. Meanwhile, the total opened at 126 and is now as high as 127 at a couple of outlets.

Golden Bears are 8-0 ATS in their last eight games as a favorite of 0.5-6.5. Find more NCAA betting trends for Oregon State vs. California.

It’s been an ugly start to the season for the Oregon State Beavers. After defeating Portland State, the Beavers have lost six straight games with a couple home losses to mid-major schools.

The Beavers have an effective field goal percentage of 47.4% while only grabbing 24.4% offensive rebounds. It would be nice if Oregon State was able to crash the glass, as the Beavers are only shooting 28.8% from long range.

To the Beavers’ credit, they have been able to limit turnovers to just 16.5% and are shooting 49.3% inside the arc, but overall, shots just aren’t falling and the offense just isn’t working.

The Beavers have two players in double figures, including Warith Alatishe and Jarod Lucas, however, neither scores over 11 points per game this year. Alatishe is really the only reliable player, especially on the boards.

Defensively, Oregon State is just pure average. Teams are taking plenty of time off the clock against them, ultimately making the Beavers work on the defensive end. The only way Oregon State can stick around in games is with its defense.

Meanwhile, California has really struggled on the offensive glass, bringing down just 20.8% of offensive rebounds. However, it’s at least able to shoot 36% from downtown.

The only downside here is that the Golden Bears will rarely take threes and instead like to shoot inside the arc, where they’re shooting 45.7% from the field.

Ultimately though, California shoots better, and that should give them the edge at home to cover the spread.

I’ll bite on the Under here. California has been one of the best defensive rebounding teams in the country, limiting opponents to just 20.4% offensive rebounds on the season.

Meanwhile, California is dreadful on the offensive glass, grabbing just 20.8 percent of offensive rebounds. It sounds like a lot of one-and-done on both sides of the ball.

The slow pace, along with a limited number of second chances, makes me like the Under, even at the low number of 127.

When you match up these two teams and their style of players, the game slows down, second chances are hard to come by, and turnovers are limited.

Did you know that if you parlayed our Oregon State vs. California picks, you could win $26.45 on a $10 bet? 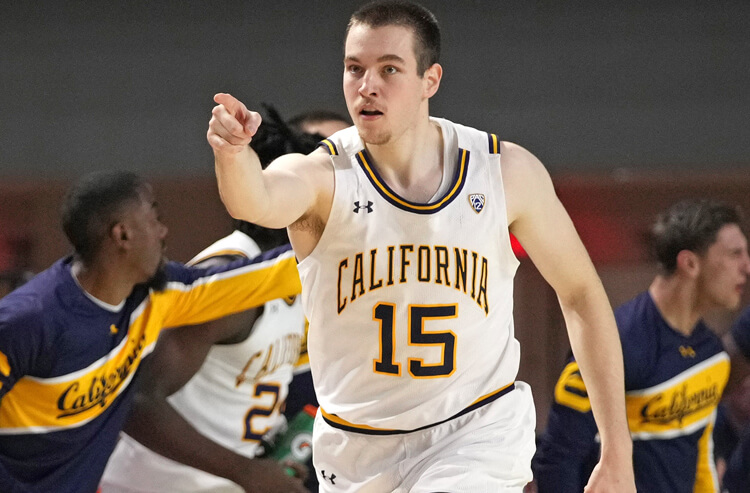 Oregon State vs California Picks and Predictions: Bears Prove to be Golden
Provided by