Michigan State has struggled on the road this season, and is a six-point underdog tonight against Ohio State in a Big Ten showdown. See which way we're leaning in our Spartans vs. Buckeyes college basketball picks.

The mad dash to the finish line in the Big Ten takes place this week, starting with the Michigan State Spartans clashing with the Ohio State Buckeyes in Columbus on Thursday.

The Buckeyes have watched their wheels wobble down the stretch, coming off back-to-back losses including an embarrassing defeat to Nebraska inside Value City Arena on Tuesday. Ohio State doesn’t have much time to hang its head before battling Tom Izzo’s Spartans, who are trying to improve their conference standing before the postseason begins, but have only one win in their last three showings.

Check out our free college basketball picks and predictions for Michigan State at Ohio State on March 3.

Ohio State opened as a 6-point home favorite and that spread has flirted with -5.5 before coming back to the opening number. The total hit the board at 142.5 points and has been bet down to as low as 138.5 with an early play on the Under. However, select books are still dealing with this Over/Under as high as 140 (Under -115).

The Under is 10-4 in Spartans’ last 14 games as underdogs. Find more NCAA betting trends for Michigan State vs. Ohio State.

Bad shooting is the Buckeyes’ burden during this two-game funk, firing a collective 43 for 115 from the field (37.4%). Those ice-cold efforts have manifested in point totals of 60 and 70 – a steep decline for a program ranked 11th in adjusted offensive efficiency at KenPom.com.

That downtick in production is bringing OSU’s defensive issues to the surface. Ohio State has allowed four of its last five foes to score 75 points or more and Thursday’s game is a quick turnaround for a roster feeling the grind of a long season. The Buckeyes are playing their third game in five days and face a stiffer test than those past two opponents in Michigan State.

The Spartans are also stumbling to end the year, suffering their third loss in the past four showings at Ann Arbor on Tuesday. Michigan State was ripe for a letdown versus Michigan, and it showed early on as MSU fell behind quickly and didn’t have the fire power to recover.

That’s a threat Ohio State may not have to worry about Thursday. The Spartans don’t have a game-changing talent on offense who can take over games and create scoring chances when everything else breaks down. Forward Gabe Brown is MSU’s leading scorer at just over 11 points per contest, but his efforts have been terribly inconsistent the past month.

Ohio State has been shredded by solid backcourt talent in those last two games, allowing big days to Nebraska guard Bryce McGowens and Maryland’s combo of Fatts Russell and Eric Ayala. Michigan State doesn’t have those takeover talents and could be thin on the perimeter tonight with starting PG Tyson Walker questionable with a knee injury and fellow guard A.J. Hoggard recovering from an illness.

The 6-point spread seems like a lot considering the Buckeyes’ recent efforts, but it’s better than trusting Michigan State on the road, where it’s failed to cover in five straight.

This Over/Under has been on a steady decline since opening as high as 142.5 points. As of Thursday morning, the number is down to 138.5.

We’ve mentioned the Buckeyes’ shooting woes the past two games and Michigan State is a more formidable foe on defense than the likes of Nebraska and Maryland. The Spartans sit 51st in defensive efficiency.

Ohio State could also be missing bodies as well, with starting forward Zed Key nursing a bad ankle injury and top reserve forward Kyle Young fighting through illness which limited him to only eight minutes versus the Huskers. If those two pieces of the frontcourt are out or limited, it could force OSU to go small and get pushed to the perimeter, where it’s shot just 15 for 52 from 3-point range in the past two games. Michigan State boasts one of the best 3-point defenses in the Big Ten, checking foes to a mere 31% clip from deep.

The potential pieces missing from MSU’s backcourt tonight could compound the team’s troubles on the road. The Spartans’ offensive efficiency drops to 0.992 away from East Lansing, leaving the team to score more than seven points less as a visitor. In its last six road showings, Michigan State has failed to score more than 70 points (average of just 61.8) and is 2-4 O/U in those outings.

This total has slimmed as low as 138.5 at some books but spots like DraftKings are still at 140 points, so shop around for the tallest total to go Under.

The Big Ten schedule isn’t doing either team any favors on Thursday. Ohio State is playing its fourth game in eight days and Michigan State is on the second of back-to-back road games which serve as its third outing in six days.

The Buckeyes run a methodical pace on offense, sitting 294th in tempo, and despite a pair of poor defensive showings this program does well to defend its home court, allowing an average of only 64.8 points per game in Columbus.

Neither side is a big 3-point threat and both the Spartans and Buckeyes have been below average from distance in their last three games respectively (MSU 35.5%/OSU 32.8%). Tired legs will leave plenty of shots short tonight and keep this final below the total. 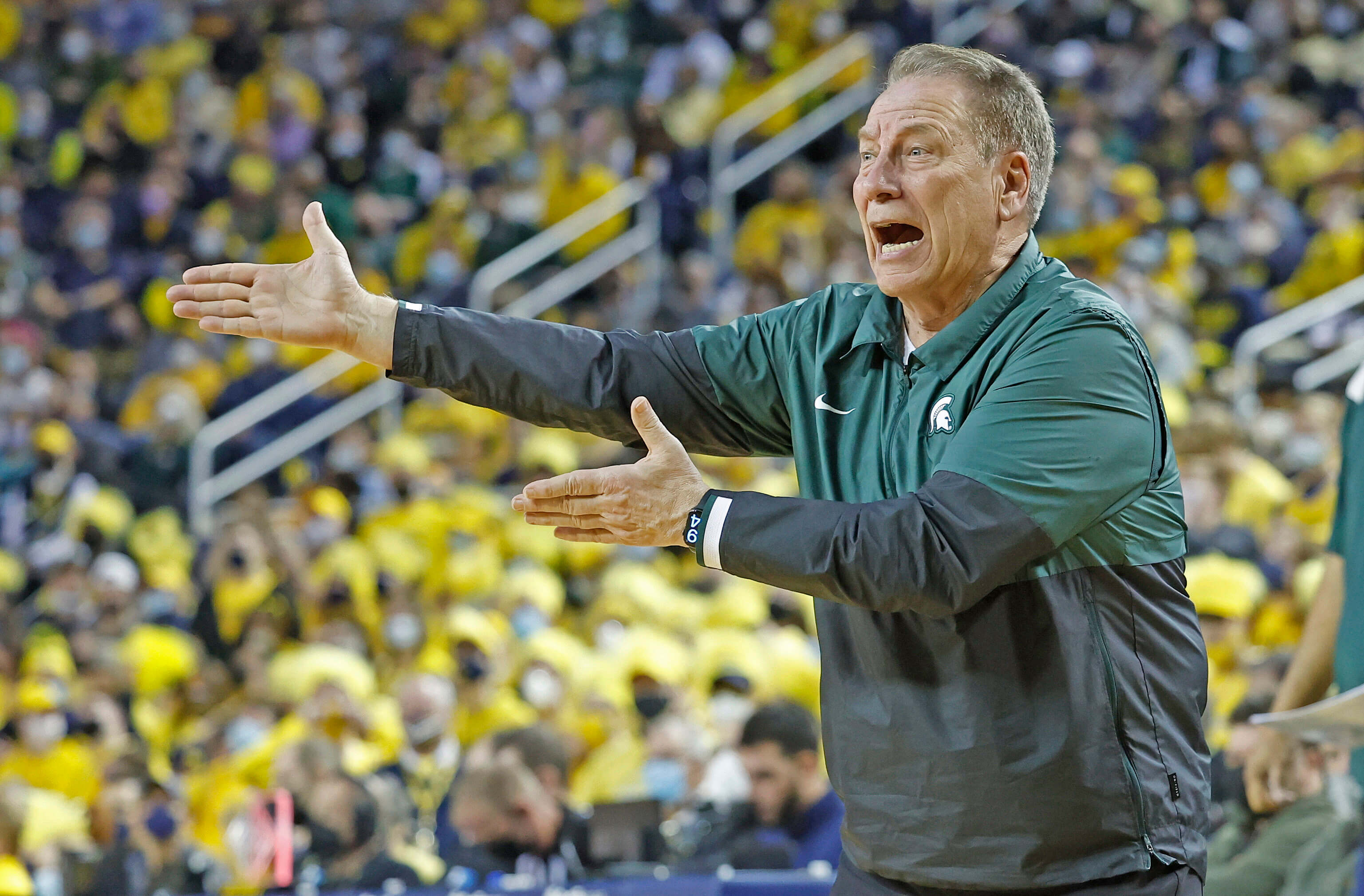 Michigan State vs Ohio State Picks and Predictions: Offensive Struggles Continue For Both Teams
Provided by