The Michigan State Spartans return three starters, including Big Ten Player of the Year Cassius Winston, from last season's team that made it to the Final Four.

The 2019-20 college basketball season is here, and what better way to begin the season than a pair of terrific non-conference games in the Champions Classic.

No. 1 Michigan State takes on No. 2 Kentucky at Madison Square Garden in the second game of the Classic, and we break down the odds for this marquee matchup with in-depth analysis, picks and predictions.

The big name for Michigan State is point guard Cassius Winston, last year's Big Ten Player of the Year, who averaged 18.8 points and 7.5 assists per game. He will be joined by Xavier Tillman (10 points and 7.3 rebounds per game) and two other players in Kyle Ahrens and Aaron Henry that received significant minutes in the rotation last year.

MSU was known for getting off to fast starts last year and with Winston still at the helm and surrounded with teammates he already has a high level of comfort with, back the Spartans to hit the 20-point mark first.

The Champions Classic featured a couple of shoot-outs last year with MSU losing 87-92 to Kansas, while Kentucky was routed 118-84 by Zion Williamson and Duke. 86 total points were scored in the first half of the MSU game while 101 first-half points were scored in the Kentucky game. So despite lots of new faces on both teams this first-half O/U might be set a bit too low.

Keep in mind that Kentucky added graduate transfer Nate Sestina who averaged 15.8 ppg on 54/38/81 shooting for Bucknell last year. And with freshmen getting major playing time on both sides, there will be defensive lapses as well.

When it comes right down to it these offenses will live or die with their point guards and not only do the Spartans have Winston but Kentucky returns their starting PG from last year in Ashton Hagans who averaged 7.7 ppg and 4.3 apg. With both teams being led by veteran ball handlers the offenses should get enough momentum going early to get Over this low number.

Hagans is more than just a good floor-general, he's a lockdown defender that was a semifinalist for the Naismith Defensive Player of the Year Award last season. Winston might be the best PG in the country but he will be challenged by Hagans.

MSU will also be without shooting guard Joshua Langford (15 ppg) who is expected to be out until at least January with a foot injury that was suffered last season. His absense will hurt Michigan State on the perimeter and put additional pressure on freshman guard Rocket Watts.

While we like the first-half total to go Over, MSU's second half team total might be set a tad too high. Expect Kentucky coach John Calipari to bring his typical defensive intensity to the forefront in the final 20 minutes and hold the Spartans below their team total of 37.5.

We already described why we think Michigan State's offense could struggle during the second half but things might not look much better for the Wildcats.

Kentucky will be looking to build a new identity on offense after losing their top-four scorers from last season. And although freshman Tyrese Maxey and Kahlil Whitney have sky-high potential, they will experience growing pains, especially against a physical, veteran team like MSU.

Looking back at last season both teams were well outside the top-200 teams in the country in terms of pace, with MSU averaging 70.1 possessions per game and UK averaging 68.9. Don't expect that to change much this year, and with two very talented teams in what will likely be a close game, expect both coaches to slow things down in the second half and focus on getting defensive stops. We're leaning towards the Under on the full game total.

The Spartans biggest weakness is probably their lack of depth in the frontcourt after Tillman but that area is a work in progress for Kentucky as well. Especially if big man Nick Richardson, who is listed as day to day with an ankle injury, is unable to go tonight or is at less than 100 percent.

The value of Michigan State's experience can't be stressed enough; returning three starters and one of the best players in the country after a Final Four run is huge, especially with a coach like Tom Izzo. Kentucky returns just one starter and while Calipari must be used to restocking with new talent every year, it will take time to get all these guys on the same page.

If this game was taking place later on in the year, it might be tempting to side with the Wildcats but right now we're backing MSU to win and cover. 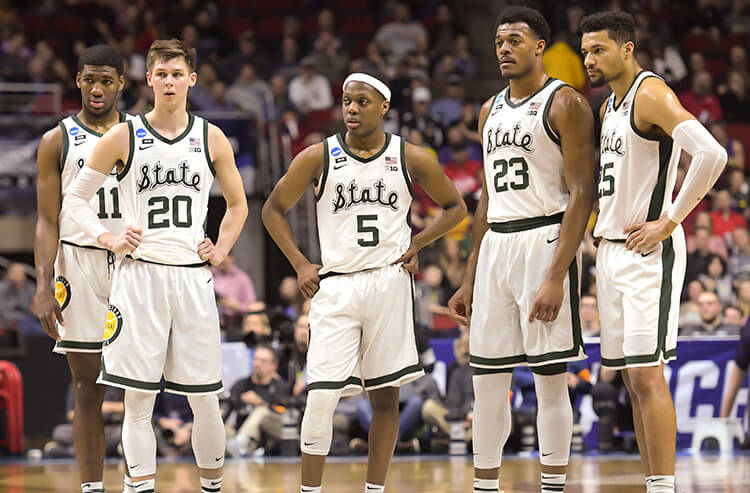