The Vols' defense is starting to show it's not all it was cracked up to be — and the Tigers are primed to pounce. See why we're not only backing the dogs to cover the spread, but also win outright, with our LSU vs. Tennessee picks.

The No. 24 Tennessee Volunteers will look to get revenge for a loss two weeks ago to the No. 21 LSU Tigers, this time from the confines of their home court. Both teams are looking to find stable ground, with the Vols splitting their first six conference affairs and the Tigers dropping back-to-back games this week.

Read on for our Tennessee vs. LSU college basketball picks and predictions for Saturday, January 22.

LSU has played 5-1 to the Under during conference play. Tennessee is 9-3 to the Under in its last 12 games. Find more NCAA betting trends for LSU vs. Tennessee.

LSU vs Tennessee picks and predictions

In the previous matchup, LSU won convincingly by twelve points. It did this despite sending the Volunteers to the line a whopping 37 times, largely on the back of its 44% three-point shooting to Tennessee's 25%. Tari Eason also played a large role, contributing 24 points on 9/13 shooting. Eason, in particular, has been brilliant as of late, averaging 17.3 points per game in the last four games while shooting a blistering 58% from the field.

The rest of the team could clearly benefit by following his example, as the rest of the Tigers have shot a measly 35.6% in their last two games (which they've both lost). Eason is by far the most exciting player the Tigers have, and he has done all of his team-leading damage (16.0 ppg) while not logging a single start this season. Running mate Darius Days (13.5 ppg) is also a solid contributor, but he should be good to go for Saturday's affair after sustaining an ankle injury earlier this week.

Tennessee, on the other hand, has had their previously anointed "elite" defense deconstructed as of late, surrendering 79 points to LSU in their last matchup before allowing 107 to Kentucky a week ago. Unfortunately for the Volunteers, the lopsidedness of the last matchup stylistically isn't going to magically disappear, and they may struggle again to keep LSU at bay given that the Tigers scored 55 of their 79 points from the paint the last time around.

On the other side of the ball, LSU's success at defending the three was something we suggested would happen in our previous writeup and that should continue today. Their 10th-ranked 3-point defense at the time of that matchup has only improved since, now ranking second in the nation at a stellar 25.9%.

This, of course, was right in line with Tennessee's overarching struggles against other teams with respectable perimeter defense, including their narrow overtime win against 9-8 Ole Miss (36th) and losses to Alabama (58th), Texas Tech (61st), and Villanova (72nd).

With the Tigers able to limit the three-point shot, Tennessee will be forced to find scoring elsewhere. It'd be foolish to expect the Vols to go to the free-throw line 37 times as they did in their last matchup. But a team that shoots just above average at the rim (122nd) is likely going to struggle against a team that has done well defending it (46th).

And while LSU does have the matchup edge, it hasn't exactly been great on offense as of late. It’s scored 70+ points just once since conference play has begun, and has averaged just 64.7 points in those six games compared to the 79.6 points it was scoring on average in its first twelve games.

It should come as no surprise then that LSU has played 5-1 to the Under during conference play, and Tennessee has played 9-3 to the same result as of late as well. And although the total opened at a disgustingly low 128, it has since moved to 132.5 which provides some breathing room.

LSU head coach Will Wade has not let the Tigers drop three straight since his first year as head coach back in the 2017-18 season. Given the stylistic matchup and the proof of its merits in the last game, it'd be wise to believe that Wade will find a way to win the game on Saturday.

LSU was able to limit Tennessee's frontcourt players to just 24 points combined in that contest and the Volunteers are likely to struggle again from whistle to whistle on that front. And Tennessee's well-documented woes from deep against defensively proficient teams on that front cannot be ignored.

The lofty +5.5 point spread for LSU is more than enough, but there are certain opportunities that call for the chips to be pushed in. 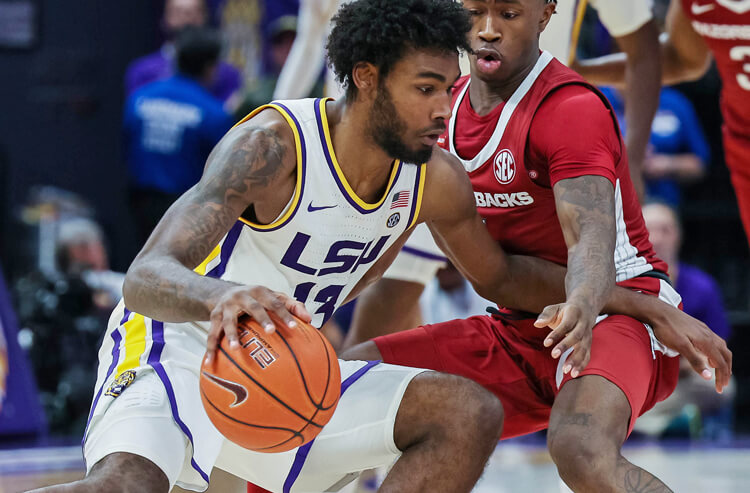 LSU vs Tennessee Picks and Predictions: LSU Pulls Off Upset
Provided by