Phoenix beat up on Dallas in Game 5 while hardly hearing from Chris Paul. It was a foreboding game for Luka's Mavs and our NBA betting picks expect the Suns to stay hot in Game 6.

After two underwhelming performances in Texas, the Phoenix Suns beat up on the Dallas Mavericks in Game 5 with the series back in the desert. The Suns came away with a 110-80 win and can now close the series out to advance to the Western Conference Finals tonight.

Will Phoenix put this series in the past and earn some extra rest before facing the winner of the Memphis Grizzlies and Golden State Warriors? Continue reading our Suns vs. Mavericks Game 6 NBA picks and predictions for May 12 to find out.

The Suns opened as 2-point road favorites in this massive Game 6, and they’re still mostly favored by 2. However, you can find Phoenix as a favorite of either 1.5 or 2.5, so make sure you’re looking everywhere.

The Suns are 20-8 against the spread in their last 28 postseason games as favorites. Find more NBA betting trends for Suns vs. Mavericks.

Suns vs Mavericks picks and predictions

The Suns went into Game 5 with a lot of question marks after having failed to play competitive basketball in Dallas. Monty Williams’ team responded by playing one of its most complete games of the entire year, and the group’s focus on the defensive end played a huge part in that.

Mikal Bridges, who has had some trouble checking Luka Doncic in this series, did a much better job of sticking with him on screens, and that’s something he’ll look to replicate in Game 6. The Suns were also a lot better about staying glued to some of the Mavericks’ better shooters, which was something that haunted them in the two games in Dallas.

The Mavs will undoubtedly shoot better than 8-for-32 from the outside in Game 6, as the team’s role players have been lighting it up from behind the 3-point line in front of their own fans. However, considering how dominant Phoenix looked in Game 5, a few extra triples isn’t going to be the difference in this one.

The Suns went back to playing a little bully ball with Deandre Ayton in the paint last game — something the Mavericks just aren’t equipped to handle. Chris Paul also only had seven points on eight shots last game, and we know he’s capable of lighting it up if called upon. If this game is close in the fourth quarter, the Point God will be aggressive In hunting his own shot. He has been absurd in close-out games since being traded to Phoenix.

It’s also worth noting that the Suns have closed out all of their series on the road since the start of the last postseason, so they are no strangers to going out and ending their opponents’ seasons in their own buildings.

In fact, this uber-competitive Phoenix group likes to silence opposing crowds, and it’s hard to see the Suns not winning a single game in Dallas. They are 34-12 straight-up and 27-18-1 against the spread in road games this year.

The Under is 8-3 in Phoenix’s last 11 games against teams with winning records, and it’s also 16-5-2 in its last 23 road games against opponents with home winning percentages of 60% or greater. On top of that, the Under is 25-5-1 in Dallas’ last 31 home games against teams with winning road records, and is 21-5 in the team’s last 26 games as a home underdog. With that in mind, both teams have an overwhelming amount of history of playing low-scoring games in these situations.

The Under also happens to have hit in each of the last three games in this series, and it’s only turning into more of a defensive battle as these teams start to learn each other’s tendencies. They’re are also starting to really dislike one another at this point, so the games are getting more physical.

As previously mentioned, the Suns are 20-8 ATS in their last 28 as favorites in the postseason, and they’re 12-3-1 ATS in their last 16 Conference Semifinals games. Phoenix is also 16-6 ATS in games with lines between +3 and -3 this season. This Suns team knows how to win games that are expected to be close, and it helps having one of the best backcourts in basketball late in games. Phoenix knows that if this thing is close, Paul and Devin Booker can be counted on to make big plays.

The Suns were also able to get Bridges and Cam Johnson going at the same time last game, and this team is at its best when the two wings are making plays all over the floor. Not many teams in the league have players that good as their fourth and fifth options.

Overall, it looks like the Suns have finally figured out how to get the job done against this Mavericks team, and they’ll show up and find a way to match Dallas’ energy here.

Did you know that if you parlayed today’s NBA Suns vs. Mavericks predictions and picks in a single-game parlay, you could win $26.01 on a $10 bet? 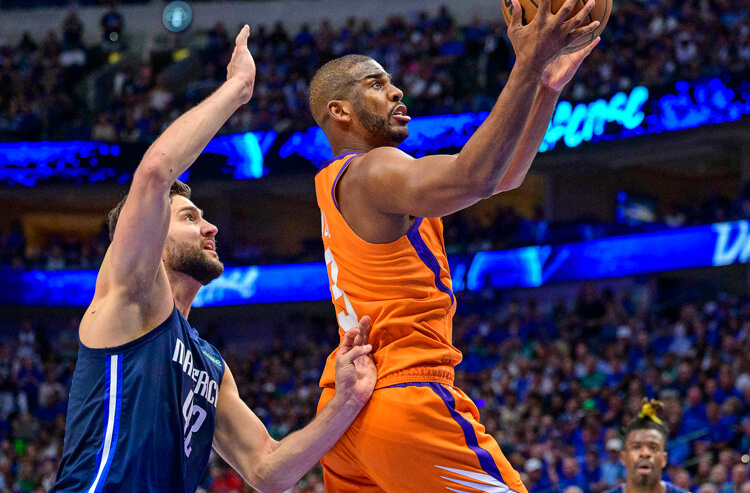 Suns vs Mavericks Game 6 Picks and Predictions: Suns Set on Dallas
Provided by