Suns vs Clippers Game 6 Picks and Predictions: How CP3 Got His Groove Back

Chris Paul has a chance to put his former team away and clinch his first trip to the NBA Finals. After the Suns fell short in Game 5, can they redeem their NBA betting value? Find out as we break down Game 6 with our Suns vs. Clippers picks.

The Los Angeles Clippers look to even up the Western Conference Finals when they host the Phoenix Suns at Staples Center in Los Angeles, California at 9:00 p.m. ET Wednesday night.

Will Ty Lue’s team find a way to fight off elimination once again? Keep reading our Suns vs. Clippers picks and predictions in order to find out.

As of 7 p.m. ET, two hours before tipoff, BetMGM Nevada has Phoenix -1, after opening Game 6 at pick 'em late Monday night. "We actually need the Suns, even though we moved the number their way," BetMGM Nevada's Jeff Stoneback said. "It's a 3/2 ticket count on the Suns, but money is 2/1 on the Clippers. Sharp money on the Suns, that's why we've gone to Suns -1." The total toggled between 215 and 214.5 a couple of times and is currently 214.5. "We need the Over for just a little bit. Almost 2/1 ticket count on the Under, and money 3/2 on the Under, but not a whole lot of action on the total."

The Suns are 5-1 ATS in their last six road games. Find more NBA betting trends for Suns vs. Clippers.

The Suns had an opportunity to advance to the NBA Finals with a win Monday, but Los Angeles came out and completely outworked Phoenix on both ends of the floor. With Ivica Zubac sidelined, many thought that the Clippers were done for, but the team put a lot of bodies on Deandre Ayton in the paint. That made it hard for the Suns to dominate around the basket especially with the way Chris Paul, Mikal Bridges and Jae Crowder were playing. Those three were unable to get it going with their jumpers, so there just wasn’t enough spacing for Ayton to ever get comfortable. However, that should change in Game 6.

Monty Williams’ offense was successful this season because of how quickly the Suns made decisions on the floor. Paul has slowed things down considerably since returning to action after a bout with COVID-19, and that has taken this offense out of its groove. Paul always tends to walk it up the floor and take his time, but he is normally extremely decisive with the ball. That hasn’t been the case lately. He has looked unsure of himself and hasn’t had his signature confidence. But at some point, that is going to come back.

Paul is too good of a player not to turn this around, and you shouldn’t be surprised if it happens here. Paul used to play for this Clippers team and these L.A. fans haven’t exactly been appreciative of him. It would mean a lot to the future Hall-of-Famer if he can clinch his first Finals berth and end their season in front of them.

Phoenix was able to overcome adversity all year long, and this team rarely shows up and plays poorly two games in a row. The Suns should also be able to match the Clippers’ intensity right form the tip in this one. Los Angeles might be playing to avoid elimination, but one look around the league should show Phoenix that there isn’t any time to mess around in these games. Players are getting hurt left and right in this postseason, so the Suns should know the importance of finishing this series and getting ready for the next one.

Paul George was a flamethrower for the Clippers in Game 5, finishing with 41 points, 13 rebounds and six rebounds in 41 minutes of action. He shot 15 of 20 from the floor in that game, and he came up huge whenever his team needed. However. George has exerted a ton of energy throughout these playoffs, that exhaustion could catch up to him. Also, the Suns could look to defend him differently in this game. Phoenix has been switching almost everything in this series, but it might be time to let Bridges and Torrey Craig just handle this defensive assignment together. Both are capable of making things tough on him and will need to fight over screens.

Three of the last four games in this series have gone Under the total, and this game should ultimately turn into a dogfight. The Suns might execute a lot better offensively in Game 6, but they also should be able to defend at a much higher level. Phoenix gave Los Angeles’ shooters way too much room last game, and it’s very unlikely that the team will turn in a lousy effort in back-to-back games.

Also, these teams genuinely seem to dislike one another at this point in the series, which has led to some highly contested possessions. They also know exactly what the other team is trying to do by now. That type of preparation usually leads to better defensive execution, rather than offensive production.

There isn’t a player in the league that runs as hot and cold as Crowder. In four games against the Nuggets, the forward averaged 12.0 points per game and shot 60.4 percent from three. However, Crowder is averaging just 6.2 points per game and shooting 21.9 percent from three against the Clippers. Part of that has to do with the way Los Angeles is defending, but the veteran has also missed some extremely good looks.

Overall, it’s only a matter of time before he catches fire again. If Paul finds his game, look for him to create plenty of opportunities for Crowder. And don’t be shocked if the forward buries some great looks here. He has NBA Finals experience and knows his team is counting on him. Now isn’t the time for him to look inexperienced. 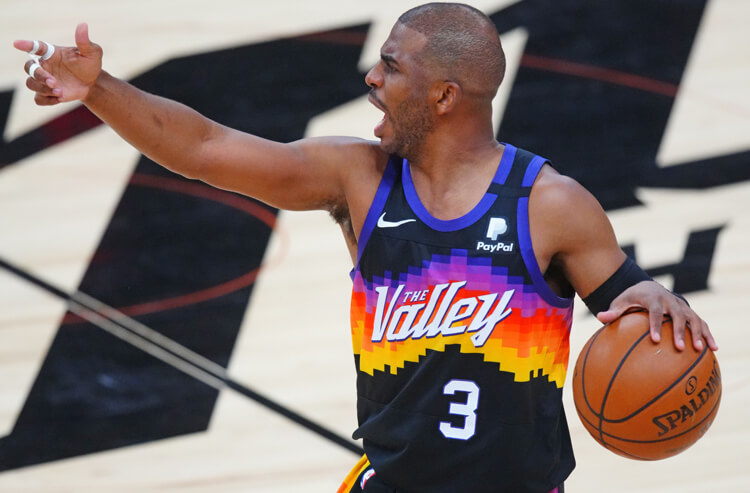 Suns vs Clippers Game 6 Picks and Predictions: How CP3 Got His Groove Back
Provided by