Jerami Grant's struck a great balance in Portland, and finds himself playing the role of marksman for a surprise Blazers squad. See why our NBA player prop picks like him to keep raining tonight against the Nets.

After a jam-packed Wednesday night schedule, the NBA slate is a slimmer three-game affair Thursday, November 16.

Looking to bet on some NBA action? Here are two of the best bonuses* available:

Jerami Grant has had a fascinating career. He’s already had multiple career arcs and has defined and redefined his role as an NBA player several times. He scratched out a career as defense-only forward on the Process-era Sixers, before discovering a limited offensive role on the post-Durant Oklahoma City Thunder.

Then it seemed he carved out a perfect niche as the Denver Nuggets starting 3-and-D wing. But he bounced from there to the Detroit Pistons to try his hand as a No. 1 option. He did better than most expected, but it became clear that was asking too much of him, even as much as his game has grown.

So now he lands in Portland, where he seems to at last be striking the perfect balance as a supercharged role player and moment-to-moment star for the Trail Blazers. His shot, once the biggest question mark of his game, is now automatic. He has a quick release, with only the slightest of rhythm dips.

His usage has dropped to 21.6%, down from a high of 26.9% in Detroit, but still far above the afterthought he was in Denver at 16.1%. And the decrease in usage has seen a corresponding increase in his efficiency. He’s currently shooting 49% overall on threes, on 5.5 attempts per game.

What makes Grant such an effective shooter is his rugged overall game. He’s incredibly difficult to bother or push off his spots, and a team like the Nets that plays soft on the perimeter much of the time should prove no match.

The Sacramento Kings just beat the breaks off the Brooklyn Nets to the tune of an NBA season-high 152 points, and De'Aaron Fox is playing like an All-Star. Yes, they’re getting big contributions from players like Domantas Sabonis, Kevin Huerter, and Malik Monk, but so much of their success comes down to Fox.

Fox has always been a supreme talent, with John Wall-level burst and athleticism, but it hasn’t always translated to winning basketball. Whether it’s the addition of Mike Brown or better supporting talent, this is the best version of Fox we’ve ever seen. It’s not just that he’s scoring, mind you, he’s always been capable of that, he’s been challenged to pick it up on the defensive end and his floor game has grown leaps and bounds as a result.

Fox is averaging a career-high five rebounds a game, despite playing three fewer minutes than in either of his two previous seasons. His effort level is at an all-time high, and it’s showing up all over the stat sheet. His 14.6% defensive rebounding rate is also a career-high and is 89th percentile among all point guards per Cleaning the Glass.

Fox has shown a dedication to rebounding and pushing the ball like never before. Getting plus money on this line is just fantastic value.

The Portland Trail Blazers are one the league’s best stories this season. They reloaded around Damian Lillard, a process that so rarely works in practice, and have added role players and athleticism that complement him perfectly, including the aforementioned Grant. But even though the team is succeeding, not every player on Portland is playing to their usual abilities. One such player is Josh Hart, who despite contributing to winning basketball, is having an inefficient season on offense.

Hart has seen a big drop-off as an outside shooter. In the 13 games Hart played for the Blazers last year, he shot 6.4 threes per game and hit them at a league-average clip, but the story couldn’t be more different through 14 games of this season.

After a cold shooting start, Hart has almost stopped taking threes altogether. He’s in the 16th percentile for 3-point accuracy among wings, but more importantly, he’s third percentile in frequency. That puts him firmly in the company of complete non-shooters on the wing.

Even in seasons past when Hart shot below league average from deep, he didn’t let it bother him, and he’d still let it fly. But that has changed this year. Now a miss shakes his confidence, and he’s avoiding taking threes as much as possible, taking just 1.9 attempts per game.

The strange part though, is this is not just a shooting slump. Hart is struggling to score from everywhere, including right at the rim, where he’s finishing just 57% of his baskets. It’s all contributed to a career-worst 46% effective field goal percentage.

Playing with so many other scorers, it’s possible it’s just going to take Hart some time to adjust, but for now, I like his Under. 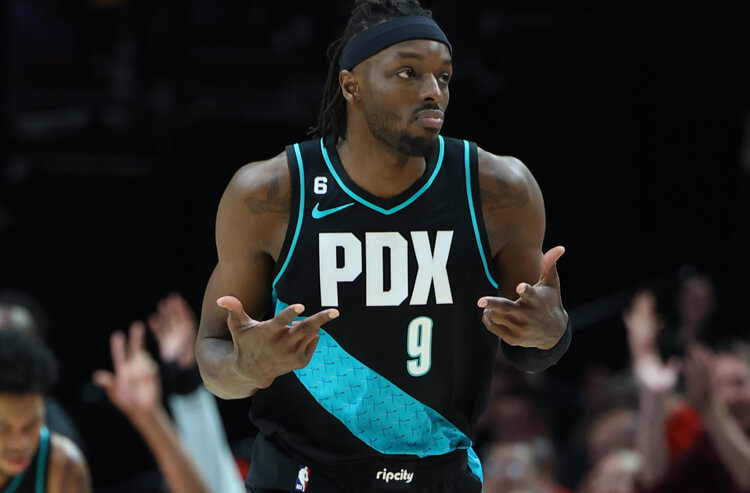