The Warriors have struggled extensively on the road this year, but inside Chase Center, this has been the dominant force we expect GSW to be. Our NBA betting picks are expecting more of the same tonight against the Pacers on the end of a long road trip.

The Golden State Warriors have won 10 straight home games and will look to keep that streak going when they host the Indiana Pacers in San Francisco on Monday night.

Indiana is playing a road back-to-back after losing to the Portland Trail Blazers 116-110 on Sunday. Both teams are hovering just above .500 and hold the No. 6 seeds in their respective conferences.

Golden State has dominated at home, especially against teams that have lacked rest before coming to visit them. We’ll talk about whether that trend should continue on Monday night in our NBA picks and predictions for Pacers vs. Warriors on December 5.

Pacers vs Warriors picks and predictions

The Warriors have played like two separate teams so far this season. On the road, Golden State has been nothing like a defending champion, going just 2-10 away from its building.

When the Warriors return home, they’re nearly unbeatable. While they lost an early-season matchup to the Denver Nuggets, that remains the only blemish on their home record. In recent weeks, they’ve been blowing out teams in Golden State, winning five of their last six home games by double-digit margins.

The Warriors have been particularly effective against fatigued teams who come into San Francisco in need of a rest. On Saturday, they beat the Houston Rockets by 19 points when Houston was on the second night of its own back-to-back.

That’s the exact situation Indiana faces as it heads into San Francisco on Monday night. The Pacers are in the sixth game of a long road trip, during which they’ve put up just a 1-4 record. They struggled against the Trail Blazers on Sunday, allowing Portland to hit 17 of 40 threes while scoring well below their own season average of 115.1 points per game.

Indiana looks like a tired team on this road trip. The Pacers have yet to score 120 points in any game since leaving home. That’s a surprising figure for one of the fastest-paced teams in the NBA.

Indiana may have a chance to break that streak against the Warriors, but that’s only because Golden State places at the fastest pace of any team in the league. Whether or not the Warriors engage the Pacers in a shootout is an open question — both teams have been playing to lower totals over their last few games — but a tired Indiana team will have a difficult time containing all of Golden State’s options regardless.

The Warriors lead the league with a historically high average of 30 assists per game. Stephen Curry may lead the way with 30.8 ppg, but Golden State can run out several great scorers, with Andrew Wiggins (19.1 ppg), Klay Thompson (17.5), and Jordan Poole (16.7) all capable of leading the scoring on any given night.

The fast-paced, heavy ball movement style the Warriors employ has proven to be a nightmare for road teams, especially those that are coming off games the night before. Indiana is struggling right now, muddling through a road trip that has seen it lose to far lesser teams than the defending champions.

While tonight’s spread is large, I expect Golden State to easily win this game by a double-digit margin. I’m taking the Warriors and laying the points.

The Warriors opened tonight’s game as a 10.5-point favorite. The public has moved that line a bit further in Golden State’s favor, and most books are now offering Warriors -11 or -11.5 as their main line.

Golden State has been a Jekyll and Hyde team between its home and road performances, and that expects to its record against the spread. While the Warriors are just 11-13 ATS overall, they’ve put up a 9-3 ATS record at home. The Pacers are 6-6 ATS on the road.

The Pacers have struggled on their current road trip, losing four of their last five games by 14 or more points. Indiana will also likely be without leading scoring Tyrese Haliburton for a second consecutive game. Haliburton, who leads the Pacers with 19.1 points and 10.9 assists per game, strained his left groin earlier on the road trip and sat out Sunday night’s game.

These are just a few more reasons to think that the Warriors can handle their business and blow out the Pacers on Monday night. This is a game that Indiana would struggle to compete in at the best of times. Without Haliburton in the lineup, it will be difficult for the Pacers to generate enough offensive firepower to stay with the Warriors at home.

The total on tonight’s game has remained fairly steady after opening at 237.5. Bettors have pushed the Over/Under down only slightly, with sites offering either 237 or 236.5 as the standard total depending on where you look.

At first glance, that big number looks reasonable for this matchup. We’re looking at two of the fastest-paced teams in the league facing off against each other.

The Warriors are third in the NBA at 117.7 points per game, while Indiana ranks ninth in the league (115.1).  Take two teams that can score, play at a fast pace, and aren’t exactly brick walls on defense, and you have the recipe for a high score.

Yet the recent experiences of these two teams don’t necessarily align with that narrative. Golden State has played to totals of under 230 in each of its last three games. That’s a small sample to be sure, but it’s especially telling that they only put up 120 against a Rockets team that was playing its own back-to-back on Saturday.

Without Haliburton, Indiana struggled to generate much offense last night against Portland. The Pacers may well play a bit more of a deliberate game without their star playmaker in the lineup. I’m backing the Under here, as while these teams could play a shootout, the circumstances of tonight’s game make me think that a number north of 235 is just too high.

The Pacers are 1-4 ATS in their last five road games. Find more NBA betting trends for Pacers vs. Warriors. 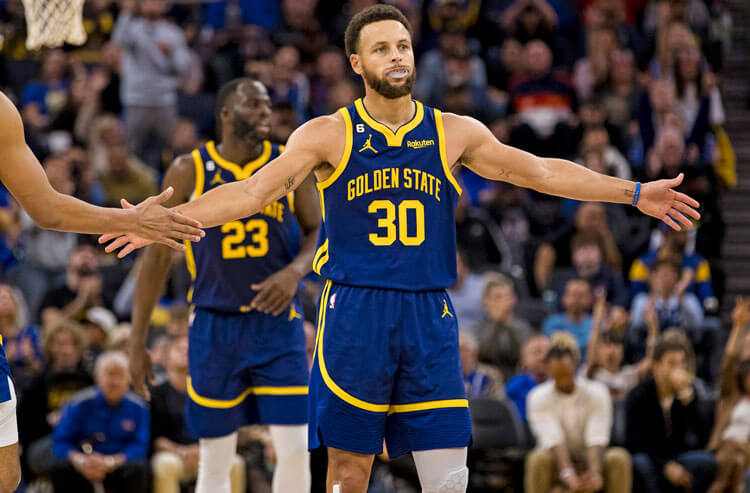