Mavericks vs Suns Game 5 Picks and Predictions: Mavs Keep the Pressure On

Dallas has put Phoenix in a vice over the last two games, leveling the series after four contests. In Game 5 tonight we're expecting another close one, with Luka primed to bounce back. Read more in our Mavericks vs. Suns picks.

After dropping back-to-back games in Texas, the Phoenix Suns will look to regain control of their series against the Dallas Mavericks on Tuesday, May 10, as the series returns to Arizona.

Dallas, meanwhile, will try to make it three in a row as it attempts to steal home-court advantage from the NBA's best regular season team. We have your NBA picks and predictions for Game 5 of Mavericks vs. Suns below.

The Phoenix Suns are significant favorites in Game 5, opening at -5.5 points and currently sitting at -6 at most books. The total has seen a slight drop from 213.5 to 213.

A) Luka Doncic, Devin Booker, and Joel Embiid each to score 25+ points BOOSTED to +250 at Betway! Claim Now

The Under is 6-1 in the Suns' last seven games following an ATS loss. Find more NBA betting trends for Mavericks vs. Suns.

Mavericks vs Suns picks and predictions

With the home team winning every game through four, the struggle between the Phoenix Suns and the Dallas Mavericks has become a high-stakes best-of-three series. Phoenix is momentarily on the ropes, but the Mavericks have yet to prove that they’re capable of carrying their momentum on the road. Has Dallas figured something out that will let them hang in Game 5? Or will Phoenix restore order at home?

The leading story for Dallas in Game 4 was largely their incredible shooting. The Mavericks outscored Phoenix by 33 points from beyond the arc, shooting 20-44 overall. 48% of Dallas’ shots in Game 4 were 3s and a significant portion of those were corner 3s, indicating that the Mavericks were generating high-quality looks and not merely being forced to chuck from the perimeter.

Dorian Finney-Smith and Davis Bertans combined for 12-18 from deep, which for Finney-Smith accounts for more than 25% of his total threes made for the entire playoffs in one game. It would be unreasonable to expect the Mavericks’ role players to shoot like that in Game 5, but even accounting for some shooting regression by Dallas, one must expect that Luka will have a bounce-back outing, after going only 9-for-25.

But though shooting grabbed the headlines, it's been the Dallas defense that has made the difference. After some embarrassing no-show efforts in Games 1 and 2, Dallas has been downright disruptive. The regular-season Suns offense hummed like a well-oiled machine, but Dallas’ renewed pressure and activity have thrown a wrench in the works.

That activity was partly to blame for Chris Paul having yet another off night. The Point God was plagued by uncharacteristic foul trouble, finishing with only four field-goal attempts in 22 minutes before drawing his sixth personal foul. That’s now two straight games that the Mavericks' newly improved defensive intensity has shaken Chris Paul out of his comfort zone.

Dallas has also upended another regular-season trend for Phoenix. The Suns committed 17 or more turnovers only 10 times in the regular season, but Dallas has now forced 17 turnovers twice in as many games.

That pressure is also affecting the Suns’ shooting. The Suns mostly got the shots they’ve gotten all year, namely, the midrange. But they connected on just 31.2% of those attempts in Game 4.

Dallas’ shooting might not travel, but their defense should, and I expect them to keep it close in Game 5.

Though narrowly, the Under cashed in Game 4, and that’s despite Dallas shooting 45% from long range on 44 (!) attempts. Outside of that red-hot high-volume bombing from distance, everything points to a likely low-scoring Game 5.

The speed these teams play at can generously be described as glacial, with just a 92.5 pace in Game 4. Game 4 also featured almost no transition plays whatsoever, with only 12 fast break points scored in total. And as neither of these teams attacks the rim, both posted free throw rates below the 20th percentile. None of these things are likely to see big shifts at this stage in the series.

Further, this Phoenix team rarely lets a single bad performance lead to repeat defensive sloppiness, and after a couple of sub-standard games in Dallas, one expects the home crowd to help rally what was the NBA’s second-best defense this season per Cleaning the Glass. The trend to know then is that the Under has cashed in six of the Suns' last seven games following an ATS loss. They’re a team that bounces back strong.

Both these teams are likely to lock in on the defensive end in Game 5, and as such, I like the Under.

While it would be easy to dismiss the Mavericks' success as the result of some hot shooting (they shot just shy of 60% true shooting as a team in Game 4), they’ve proven throughout the playoffs that they can sustain it. Dallas is shooting a notch above 40% from deep for the series, and their 45% mark in Game 4 included Luka going 1-for-10.

But what’s changed the series for the Mavericks is on the other end. Dallas has found a simple but effective formula that should survive the trip to Phoenix. They’re bodying up on the Suns and crowding them outside the paint. After thriving on 2-point shots outside the paint all season long, Dallas held Phoenix to just 11-34 on 2s outside the restricted area in Game 4 and 10-31 in Game 3.

Those shots are the lifeblood of the Suns' offense and are usually the ones teams are happy to give up. But the Mavericks are denying them air space on those looks, and their physicality has thrown off even in the indefatigable Point God.

As the saying goes, defense travels, and it’s why I like the Mavs to cover here.

Did you know that if you parlayed today’s NBA Mavericks vs. Suns predictions and picks in a single-game parlay, you could win $26.45 on a $10 bet? 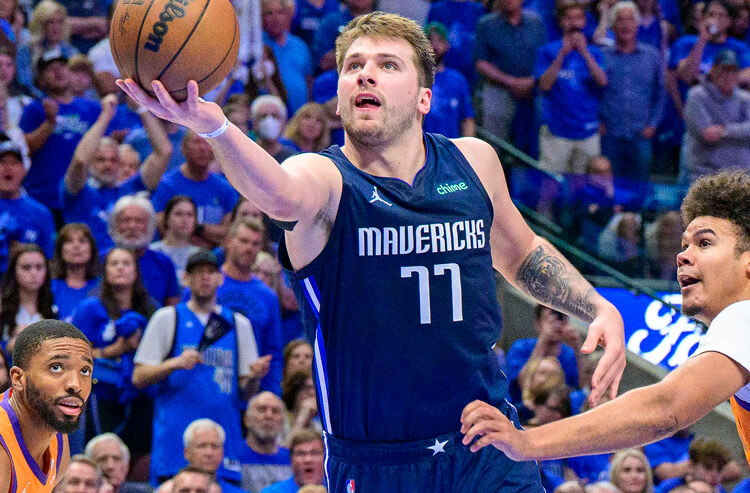 Mavericks vs Suns Game 5 Picks and Predictions: Mavs Keep the Pressure On
Provided by