We're treated to two playoff games tonight, which means there is plenty of prop action going on. Read onward to see which props have tickled our fancy for tonight's pair of Game 5s. 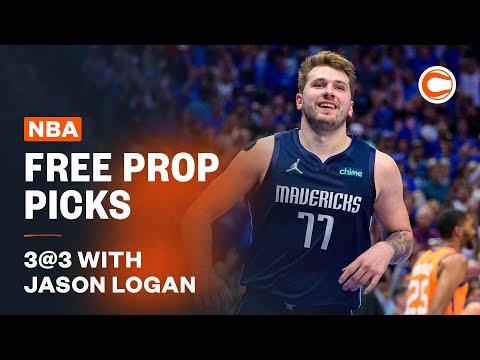 The NBA betting board is alive with a pair of Game 5s on Tuesday, as the 76ers visit the Heat and the Suns host the Mavericks for what is always the most important game of a postseason series.

We dissect these two matchups, dig into the recent results, coaching adjustments, and injury reports in order to unearth the best NBA prop betting value.

Here are our three favorite free NBA player prop picks for May 10.

NBA player props for May 10

The return of Joel Embiid doesn’t just give the Philadelphia 76ers back their pillar in the paint, but also kickstarts the offense’s transition attack.

Without Embiid inside for the first two games, the Miami Heat were scoring at an efficient rate and forcing the 76ers to start a good chunk of possessions off the inbounds — automatically slowing things down.

But, with Embiid back, the Philadelphia defense isn’t giving up as much and the offense has found that high gear in transition. The Sixers went from just 25 total fastbreak points in Games 1 and 2, to 37 points off fastbreaks the past two games.

No one benefits more from those transition sets than speedster Tyrese Maxey, who sits behind only Giannis Antetokounmpo in terms of scoring in those pace-pushing plays this postseason. Maxey is scoring almost eight points per game in transition for a points-per-play average of 1.46.

Maxey is averaging 23 points per game for the series and coming off a 5-for-10 shooting night for 18 points in Game 4. With James Harden’s 31-point eruption in Game 4 putting the Heat defense on high alert, Maxey could find more room to operate and thrive in an up-tempo 76ers attack.

In Strus We Trust

The Heat’s backcourt will be leaning on guys like Max Strus to play more impactful minutes in Game 5, as veteran guard Kyle Lowry is still limping through a hamstring injury.

Strus stepped up with nine points in both Games 2 and 3 — all of which came from beyond the arc — and he’s not afraid to let it fly from outside, going a combined 9-for-29 from distance in this series.

He was a chilly 5-for-16 from beyond the arc in the two games in Philadelphia, but with Game 5 back in sunny South Beach, Strus will lean on that home-court familiarity where he averaged 2.5 triples per game this season.

Strus is tagged with a hamstring injury for Game 5 but don’t let that report fool you. Miami has half its roster on the injury report and that “game-time decision” designation has followed Strus in every outing this series. He’s fine.

Miami was an ugly 23-for-65 from 3-point range in the past two games, but this is the best outside shooting team in the NBA (37.4%) and will play more like it tonight, with Strus knocking down at least three big triples.

Luka Doncic and the Dallas Mavericks have battled back to tie this conference semifinal series with the Phoenix Suns at 2-2, and part of that has been an adjustment to how Doncic goes about his business on offense.

The Mavs have been utilizing Luka in the post-up more often in the past two outings, leaning on his strength to overpower smaller guards, and his quickness to burn bigger defenders on and around the blocks. Doncic has also looked to dribble penetrate more rather than play off high screens and look from long range.

Dallas can then play its small-ball rotation around Doncic down low, benefiting from the extra space on the perimeter when the Suns collapse on Luka inside. That interior focus has led to more assists, extra passes, and better team scoring for the Mavs — but has slimmed Doncic’s production from outside.

He shot a combined 9-for-21 from 3-point range in the first two games in Phoenix but was just 3-for-17 in the next two home games, even passing on 3-point chances with an extra pass to an open shooter and trusting in his teammates to make those triples.

With the series swinging back to the desert and the Mavericks having success with Doncic’s play in the paint, we're going to go Under his 3-point make for Game 5… which should be a terrifying bet to watch play out.