With Frank Vogel out, the Lakers are on the hunt for a new head coach. ESPN broadcaster and former Warriors head coach Mark Jackson (+200) tops the board with a plethora of options listed below him. Check out the full list of candidates below.

A disastrous season that saw LeBron James' crew finish 33-49, missing the NBA Play-In Tournament altogether, is finally over — and as a result, the Lakers are moving on from head coach Frank Vogel.

That puts the Lakers in the hunt for someone to lead their bench and odds are now available for who that someone might be. From Mark Jackson and Nick Nurse all the way to Coach K and Phil Jackson, the options are plentiful.

You can check out the full list of candidates and their odds below.

Sitting atop the opening odds board to become the Lakers' next head coach is ESPN broadcaster and former Golden State Warriors head coach Mark Jackson.

The former NBA player coached the Warriors from 2011 to 2014 but was ultimately leapfrogged by Steve Kerr, who led GSW to three NBA Championships during a run of five straight NBA Finals appearances.

According to The Athletic's Sam Amick, LeBron James would take kindly to a Mark Jackson hiring, stating James is "very enthused" at the possibility of him becoming the next head coach.

That LeBron James endorsement alone has him topping the early board at +200.

Nick Nurse led the Raptors to their first NBA Championship in 2019, won Coach of the Year in 2020, and was immediately rewarded with a multi-year extension in September 2020, making him one of the highest-paid coaches in the NBA.

Despite the multi-year deal and a comfortable gig, Nurse was the first name to cycle the rumour mill on the heels of Vogel's firing. It seems unlikely he switches roles, but either way, he sits second on the board at +450.

Just below Nurse on the board is another Coach of the Year winner, Mike Brown. He has a lot of ties to this position, having coached LeBron James for many of his early years in Cleveland as well as coaching the Lakers in 2011-12.

Brown was last a head coach for the Cavs during the 2013-14 season but has spent the last half-decade on Steve Kerr's staff in Golden State, making him an interesting candidate at +500.

Nick Nurse, current Toronto Raptors head coach, sits second on the odds board to become the next Lakers head coach behind Mark Jackson. 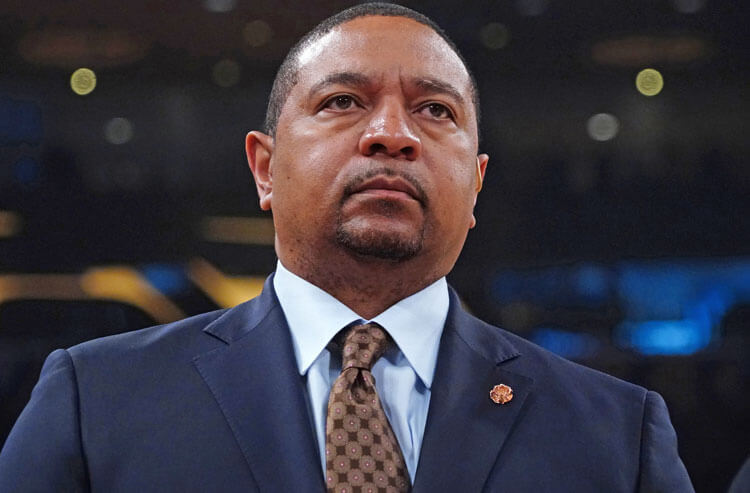