Win totals for the 2022-23 NBA season are now available, but bettors need to strike fast before the odds change. Here are our five favorite bets, including a Northwest team looking to rebound.

We’ve officially hit the dog days of the NBA offseason. The NBA Finals concluded on June 16, the draft came and went on June 23, and Summer League formally wrapped up on July 17. Even the famously chirpy trolls on NBA Twitter seem to be enjoying a little R&R.

Although the NBA and its players may be resting, the oddsmakers at PointsBet have been busier than ever. The popular sportsbook has just released NBA team win totals for all but four of the Association’s 30 clubs.

Not surprisingly, the Boston Celtics are at the head of the class with 55.5 projected wins. Their high total is a reflection of their stunning playoff run, as well as their acquisition of point guard Malcolm Brogdon, a steady two-way talent who should provide the Celtics with much-needed playmaking and depth.

At the opposite end of the spectrum are the San Antonio Spurs, whose projected win total of 23.5 can be attributed to their shameless pursuit of French center Victor Wembanyama in the 2023 NBA Draft. The 7-foot-3 pivot is a game-changer whose eye-popping highlights have been making scouts salivate for years.

I’ve examined PointBet’s offerings closely and have selected the five NBA team win totals you need to pounce on now before the odds shift.

The Detroit Pistons were easily among the worst teams in the league last season, finishing 30 games out of first place in the Eastern Conference with an embarrassing -7.7 point differential. They lost 14 games in a row during one particularly putrid stretch and gave up 140 points or more three times in regulation. And yet, as bad as they were, they still won 23 games.

Detroit has since overhauled its roster by drafting explosive guard Jaden Ivey and athletic big man Jalen Duren in the lottery and adding Nerlens Noel via a trade with the New York Knicks. The 28-year-old Kentucky product is an underrated rim protector who should do wonders for the team’s 24th-ranked defense.

The Pistons can also look forward to the continuing maturation of 2021 No. 1 pick Cade Cunningham, who increased his scoring average by 5.4 points per game following the All-Star break as he overcame injuries and became more comfortable in half-court sets. It's worth noting that Detroit went 10-14 during that stretch, a marked improvement on its 13-45 pre-All-Star Game record.

Cade Cunningham going off here in the 4th. Career-high 29 points and counting. pic.twitter.com/AK4xmjy2W7

Detroit is still a few years away from contending for a title, but the team's new additions - and a hopeful new attitude - have the Pistons on the right path.

The Warriors must feel a little like Rodney Dangerfield: They can’t get any respect. Despite winning 53 games a year ago and capturing their fourth title in eight seasons, Golden State has been downgraded to just 50.5 wins by PointsBet.

Granted, Steph Curry (34), Klay Thompson (32), and Draymond Green (32) are all on the wrong side of 30, and the possibility of injury or regression exists for players who have accrued so many postseason miles over the years.

However, the Warriors are uniquely positioned to help relieve their aging core with an infusion of young talent led by Jonathan Kuminga. The 19-year-old forward displayed flashes of brilliance in his rookie season and scored 17 points or more three times in the playoffs.

Steve Kerr’s squad should also receive a lift from Moses Moody, who erupted for a season-high 30 points during a regular-season game against the Denver Nuggets in March, and former No. 2 pick James Wiseman, who recently showed off his hops and his health in Summer League.

Golden State GM Bob Myers also did well to acquire Donte DiVincenzo in free agency. The 25-year-old averaged 10.3 points, 4.4 rebounds, 3.6 assists, and 1.5 steals for the Sacramento Kings and is a former NCAA and NBA champ who understands the importance of system play.

The Warriors will look different in 2002-23, just as they looked different after their last title, but they possess the perfect infusion of youth and experience to go Over 50.5 wins.

Just as it cost Thanos “everything” to achieve his cosmic plan, the Timberwolves may soon discover they paid the same steep price to acquire Rudy Gobert. The Wolves forked over Malik Beasley, Patrick Beverley, Leandro Bolmaro, Walker Kessler, Jarred Vanderbilt, four first-round picks, and a pick swap for the talented center. Sure, Gobert is a three-time Defensive Player of the Year and a rebounding champ, but he also plays THE EXACT SAME POSITION as Minnesota’s franchise star, Karl-Anthony Towns.

"The Rudy Gobert trade is the single most egregious overpay in NBA history. It's madness."

There’s no question that Gobert will improve the Timberwolves’ leaky D, but how will head coach Chris Finch find room for both players on offense? Gobert took 73.8% of his shots within 0-3 feet of the basket last season, compared to KAT who had 33.3% of his shots within the same space. Towns has the ability to drain threes, but keeping him on the perimeter would be a waste of his ability to operate around in the paint, where opposing teams struggle to contend with his size and strength.

There’s also the issue of depth. The Wolves will now have to count on minutes from mercurial retreads like Austin Rivers and Taurean Prince as well as unproven draft picks since so much of the franchise’s salary cap has been tied up by its two-headed monster at center.

Minnesota hasn’t won 50 games in a season since 2003-04, and that trend isn’t about to change next year with its poorly conceived roster.

Magic fans had every right to be excited on draft night when their team selected Paolo Banchero first overall. The 6-foot-10 Dukie has already shown he belongs on the big stage with his tantalizing debut in Vegas.

Although I’m big on Banchero’s long-term career prospects, I’m less sold on Orlando’s immediate future. The Magic, after all, won just 22 games a season ago and finished 19th in defensive rating and opponent points off turnovers, and 20th in opponent second chance points.

Their defense had more holes than a chunk of Swiss cheese and Banchero isn’t about to solve that. In fact, he may even complicate it. Banchero’s presence will cut down on the playing time of Wendell Carter Jr. and Mo Bamba, two players who provided the Magic with some semblance of rim protection.

Some improvement should be expected from second-year point guard Jalen Suggs, but the Magic are still too raw and too inept to make a big jump in Banchero’s first year on the job.

You can forgive most Trail Blazers fans if they want to forget all about the 2021-22 season. Portland lost Damian Lillard to an abdominal injury in January and proceeded to gut the team, trading away CJ McCollum, Larry Nance Jr., Norman Powell, and Robert Covington in a series of soul-crushing moves. The team predictably tanked, finishing with its lowest win total since 2005-06.

However, it wasn’t all bad news from a development standpoint. The departure of those high-usage players paved the way for electric shooting guard Anfernee Simons, who averaged 22.3 points per game in the second half of the season. It also opened up playing time for Josh Hart, who came over in a trade with New Orleans and proceeded to average 19.9 points, 5.4 rebounds, and 4.3 assists in Portland.

"I'm blessed, I'm happy I got the 44. I got the Barack Obama." pic.twitter.com/ycJQtpSpoD

The Blazers have since acquired former 20-point-per-game scorer Jerami Grant to shore up their wing, and wrecking ball Gary Payton II to make up for Lillard’s well-known aversion to playing defense. Together, they should be able to lock up the perimeter and greatly improve Portland’s ability to switch on D.

2021-22 may have felt like a lost season to many in Rip City, but it laid the foundation for the Blazers to come roaring back in the Northwest. 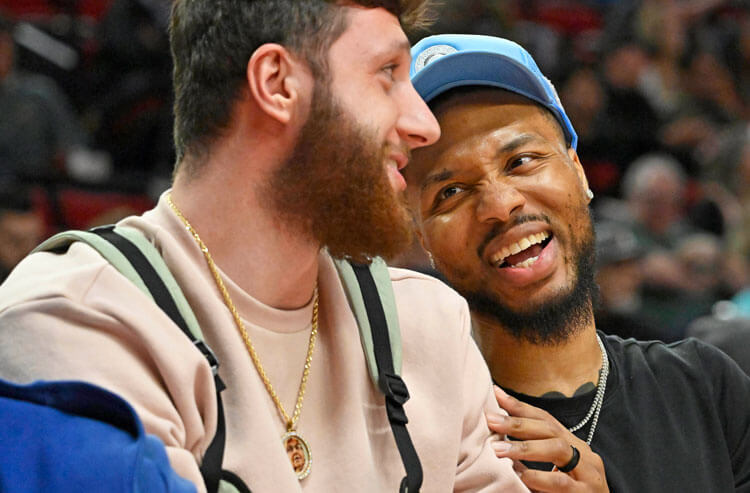