76ers vs Kings Picks and Predictions: Back Embiid-less Sixers in Sac Town

It's clear the 76ers aren't the same team without Joel Embiid, but it's not as bad as you may think, and tonight they play a Kings team that's quickly fallen out of Western Conference mix. Find out the best plays in our 76ers vs. Kings predictions.

Life has been tough for the Philadelphia 76ers without Joel Embiid. After starting the season 8-2, the Sixers have lost six of seven since Embiid tested positive for COVID.

But Can Philly steal a win on the road as short underdogs when they visit the crownless Sacramento Kings? Sac Town has lived up to its name by dropping seven of its last eight straight up and against the spread.

So, who has the NBA betting edge? Find out in our free NBA picks and predictions for 76ers vs. Kings on November 22.

The Kings opened this matchup as two-point home chalk and have seen the early money, moving the line to -3.5. The total hit the board at 219.5 and has been bet up to 221.5. Use the live odds widget above to track any future line movements right until tip-off and be sure to check out the full NBA odds before betting to ensure you get the best number.

76ers vs Kings picks and predictions

Yes, it has been tough sledding for the 76ers without Joel Embiid, winning just once in the seven games without him. With Embiid the Sixers were 8-2, were tops in the NBA in offensive rating, and were the top 3-point shooting team in the league.

Obviously, that has not been the case without the All-NBA center in the lineup. Not only does the team miss his scoring and rebounding, but he is also an excellent passer and creates many opportunities for teammates with the inside-out game. But the offense hasn’t been as terrible as you might think without him.

The Sixers still rank a respectable 17th in offensive rating during this stretch without Embiid, and now they go against a Sacramento team that is in a real slump at both ends of the floor.

While the Kings rank 11th overall in offensive rating, that drops to 21st over this eight-game stretch in which they have been saddled with seven losses. They are also shooting just 32.5 percent from 3-point range over that span, which ranks 25th in the NBA.

Both defenses have struggled during their respective slumps (more on that in a moment) but the Sixers have done a better job of running their offensive system lately, so we’ll side with the team that is getting 3.5 points in this spot.

The early money on this game has come in on the Over and even at a high number of 221.5 it still might not be high enough, because the biggest place that it looks like the Sixers have missed Embiid has been on the defensive end of the court.

Without Embiid the Sixers rank 28th in defensive rating and are giving up 111.6 points per game. And while the Kings are slumping on offense this is still a team with several capable scorers including Da’Aron Fox, Buddy Hield, and Harrison Barnes, and ranks 10th in the NBA in scoring per game.

Meanwhile, the Kings rank 24th in defensive rating, 25th in opponent field goal percentage, and are allowing 111.1 points per game over their eight-game skid.

This game should have a free-and-loose feel to it, so the Over looks like the better bet when it comes to the total.

Andre Drummond is certainly not Joel Embiid, but the 76ers backup center has done his best in Embiid’s absence. Well, at least early on.

Drummond was on a tear during the first four games without Embiid, averaging 11.5 points and 18.3 rebounds. But teams have started attacking him (as they always have) and those numbers drop to 5.3 and 5.3 over the last three games.

Luckily, Drummond might be able to have a little more of an impact in this game. The Kings are one of the worst teams in the NBA in defending the interior, giving up the second-most points in the paint per game this season. Bet on Drummond to get back on track here and take the Over on his points total.

Did you know that if you parlayed today’s NBA 76ers vs. Kings predictions and picks in a single-game parlay, you could win $56.82 on a $10 bet? 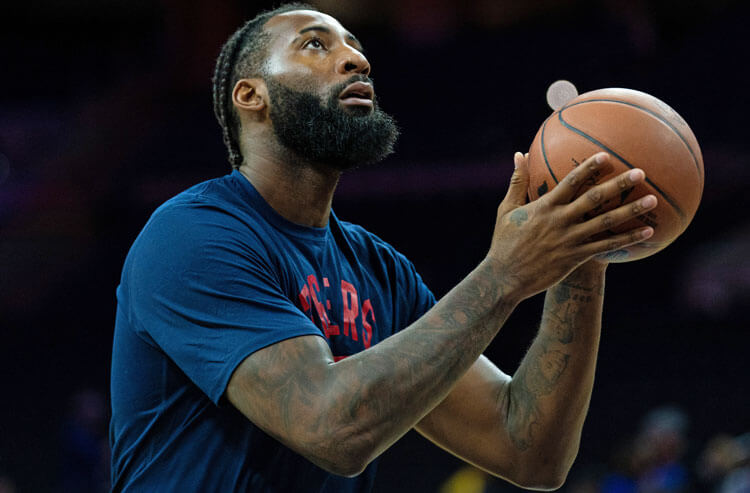 76ers vs Kings Picks and Predictions: Back Embiid-less Sixers in Sac Town
Provided by