Verizon 200 at The Brickyard Picks, Predictions, and Race Preview

Chase Elliott is crushing NASCAR right now, riding a five-race Top-2 streak into a road course event, where he's the clear favorite. We're not trying to fade him — find out who else can contend in our Verizon 200 at The Brickyard betting picks.

In a NASCAR season that's seen a departure from the ordinary so far, last weekend's historic DQ result definitely takes the cake.

What's in store for this weekend at Indianapolis Motor Speedway? Well, it's a road course, so Cup Series points leader and current human flamethrower Chase Elliott predictably finds himself atop Verizon 200 at The Brickyard odds.

Will Elliott's dominant run continue? Let's break down the field and find the best trends and angles for NASCAR betting this weekend with our Verizon 200 at The Brickyard picks and predictions.

Verizon 200 at The Brickyard best bets

Picks made on 7/27/22 at 11:45 a.m. ET.
Click on each pick above to jump to the full analysis.
Odds courtesy of DraftKings Sportsbook.

Verizon 200 at The Brickyard favorites

He had a Top-5 car last year but is winless at Indy, even on the oval. Can he join his dad as the first father-son combo to win at Indy in the NASCAR ranks? Elliott was fourth, eighth and second, respectively, on the three road courses run this season, and enters having scored five straight Top-2 finishes including three wins.

He led the most laps and finished third last year. While he was 29th and 15th at both COTA and Sonoma, he was also fourth in Road America and enters this weekend having scored three Top-5 finishes over the last five weeks.

They’re 2-for-3 in road course wins this year with Ross Chastain winning in COTA and Daniel Suarez in Sonoma. Chastain has finished first, seventh and fourth, respectively, on road courses in 2022 and Suarez going 24th, first and fifth himself. The only reason he was 24th in COTA was that he was spun on the restart for the second stage — he led every lap of the opening stage.

Kaulig Racing won this race last year, so why not Trackhouse in 2022? Chastain has seven Top-8 finishes in his last nine starts on the season. Suarez has five Top 10s in his last six, including three in the Top 5.

Verizon 200 at The Brickyard longshot picks

He was fourth in COTA, sixth in Sonoma, and 11th in Road America, making me start to believe in him on road courses again. He also had a Top 5 here last year, at that.

He’s a road racer by nature and was eighth, fifth, and seventh, respectively, in the three road course races run this season. He also won the Xfinity Series race on this very track here a year ago.

Verizon 200 at The Brickyard fades

Verizon 200 at The Brickyard matchup pick

Byron has really struggled lately with just one Top-10 finish in his last 13 tries. Bell meanwhile has eight in that time frame, including two straight Top-4 results. Bell has crossed the finish line ahead of Byron in nine of the last 11 races.

Verizon 200 at The Brickyard preview

This is the fourth road course race of the 2022 season. The previous three were all won by first-time winners in Cup competition. Ross Chastain scored his first ever Cup win at COTA back in March. His teammate, Daniel Suarez, did the same last month in Sonoma. And earlier this month, Tyler Reddick picked up his inaugural Cup victory in Road America.

That’s why I feel that streak ends Sunday.

Another factor: Chevy has won each of the three road course races this season and the final six of 2021 for nine straight wins on these tracks. Going back to the 2019 race at Watkins Glen, Chevy has won 13 of the last 14 road races in general.

That’s why the Chevy drivers are tops in the odds, and despite being 0-for-3 in 2022 on road courses, is also why Hendrick Motorsports drivers are favored too.

Chase Elliott and Kyle Larson are the clear heavy-hitters.

JGR have struggled mightily on road races this year. So has SHR, which is why I feel this one will once again be largely dominated by Chevy-powered teams.

Trackhouse has won 2 of the 3 road races in 2022 with RCR taking the other.

Verizon 200 at The Brickyard key stat

This is the second race on the IMS road course, and with a new car, so no real sample of relevant stats to base anything off of for this weekend.

Verizon 200 at The Brickyard live betting trends to watch 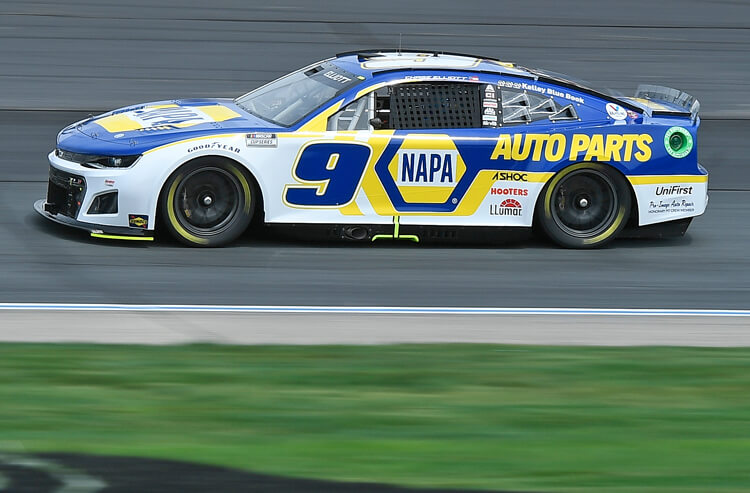 Verizon 200 at The Brickyard Picks, Predictions, and Race Preview
Provided by