Kyle Larson's elimination means a new NASCAR Cup Series champ will be crowned in 2022, and our South Point 400 picks examine who's most likely to make the boldest bid for the crown in the Round of 8. Could it be Denny Hamlin...?

This NASCAR season's seen plenty of oddities and upset winners throughout its bends and (mostly) left turns, so it seems only fitting that we'll be crowning a new champion in November.

With the South Point 400 odds taking center stage, defending champion Kyle Larson will be on the outside looking in at the playoff picture. Who will step up and assert their claim to the vacated throne?

As the Round of 8 gets underway, check out our best free South Point 400 picks and predictions for Sunday, October 16.

Picks made on 10/12/22 at 2:05 p.m. ET.
Click on each pick above to jump to the full analysis.
Odds courtesy of DraftKings Sportsbook.

He won this race last year and was fourth and second respectively in the two Kansas races. Hamlin has three Top-4 finishes in his last four Vegas starts and has improved his finishing position in four of the five tracks that we’ve made a second visit to in 2022.

Worth a look. He was seventh last year and 10th this past spring. Bell also was fifth and third in the two Kansas races this season as well, and enters fresh off a win last weekend. He’s bettered his result in four of the five return trips to tracks this season. Bell has four Top 5s in six playoff races, too.

Chastain won an Xfinity race for Ganassi here and was third this past spring. On top of that, he finished seventh in both Kansas races this season.

He finished seventh in the playoff race in 2019 and restarted the Spring race in 2020 on the front row before contact cut his tire on the overtime restart. He was eighth last year in this very race too. Byron finished fifth in the spring, and 16th and sixth at the pair of Kansas races this season. He said seeing tracks for a second time has helped him this season. He's right. He's improved in four of those five races.

He has nine Top 8s in his last 10 there overall. He was sixth and fifth respectively at Kansas (like track) this season.

Seven Top 7s in his last nine Vegas starts including four straight Top 6s. He was fourth here in the spring and third at Kansas’ spring race. He also enters on the heels of a Top 5 last Sunday.

He has back-to-back of Top-10 finishes here, including seventh in the spring. Reddick has two finishes outside the Top 30 this year at Kansas, but both were due to crashes while leading when a tire went down. What I don’t like are his odds at +800. Too low for a non-playoff driver like himself.

Prior to a runner-up in last year’s playoff race, Elliott had just two career Top 5s on this track with his last four finishes being 26th, 22nd, 13th, and 9th, respectively. He has five finishes of 22nd or worse there too and was only 29th and 11th at Kansas. He enters this weekend with five of his last seven results being outside the Top 10 including, four of 20th or worse.

He won last spring, was second this spring, and had a fast car last fall, too. On like tracks this season, he’s finished second (Kansas 1), eighth (Kansas 2), and ninth (Coke 600). The only question is, how locked in is he now after being eliminated from the playoffs in shocking fashion last weekend?

Logano hasn’t fared well lately in Vegas, nor did well at Kansas this season either. Wallace won the last race at Kansas and had a Top-5 car in the first race there. He hasn’t been great at Vegas though, which is why I don’t necessarily think he’s a race-winning contender on Sunday. However, can he finish ahead of Logano and be on the outskirts of a Top-10 result? Absolutely.

Ford has been the most dominant team on the 1.5-mile track with 13 wins in 29 tries, but was shut out a year ago. However, Toyotas have dominated this track and Kansas (the closest resembling track) this season.

They also feel the most confident, too. Christopher Bell has a rejuvenated outlook after winning last week’s race in to preserve his payoff life.

“I mean, I feel extremely good about what we have going on here in the next three races,” he said. “Ever since the schedule laid out and we were looking at the Playoffs, the round of 16 all were really good racetracks for us, the Round of 8 were good racetracks for us. The round of 12 with Talladega and this racetrack in there, I was super concerned and nervous. This whole last two weeks, I had been extremely deflated, just kind of down in the dumps.

“Now I can promise you I’m as excited as ever heading into these next three races.”

He had to win the ROVAL 400 to advance, and did so, making him a dangerous driver on these tracks.

So is his teammate. Denny Hamlin (didn’t have to win to advance, but he got by and heads to arguably one of his better tracks.

“All of (the tracks in the third round) are P1 for me and I like all of them,” said Denny Hamlin. “All of them are just perfect for what our strength is, especially with the Toyotas and myself. I’m excited. We had a good test at Martinsville and even though we finished bad there in the spring. We’re going to have to qualify well there and track position is going to be huge. We’re going to go to work and really excited about our prospects in this next round.”

Chevrolet is right there to pick up if Toyota falters, but only Chase Elliott and William Byron are left for Hendrick Motorsports to vie for this year’s championship. Ross Chastain would be the feel-good emotional story and arguably the top driver among the bow tie camp to watch.

“I think it’s going to be a really tough round,” Elliott admitted after a 20th-place finish in Charlotte. “Vegas was a struggle for us in the spring. 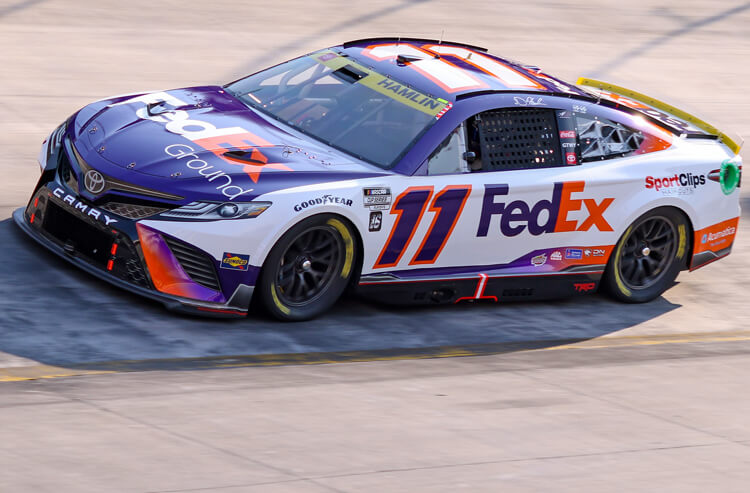