NASCAR betting booms with return to racing at Darlington

Betting action on Sunday's return to racing at Darlington - The Real Heroes 400 - eclipsed Daytona 500 handle at some sportsbooks while others saw a major boost in betting on the first race back since the COVID-19 shutdown.

NASCAR betting was hugely popular Sunday – even more heavily bet than the Daytona 500 for at least one sportsbook – as Cup Series racing returned from the COVID-19 shutdown. The Real Heroes 400 at Darlington offered the first chance to bet on NASCAR since the March 8 Phoenix race.

Several sportsbooks talked about the surprising amount of money bet on Sunday’s NASCAR Darlington race, and what oddsmakers expect of Cup Series betting on Wednesday, with a quick turnaround for another race at the same venue.

Why was NASCAR betting so popular?

NASCAR betting was so popular because it was just the second major sports organization in the U.S. to return to competitive action, trailing only the UFC, which had three events in the past week. And that hiatus had racing fans and sports bettors hungry for live domestic action.

Added Patrick Eichner, director of communications for PointsBet USA, “Bettors have repeatedly shown interest in the new kid on the block, so to speak. So NASCAR’s return was welcomed in wagers.”

How much was bet on Sunday’s NASCAR race?

PointsBet USA saw stunning betting handle on The Real Heroes 400 this past weekend.

“We will outperform the Daytona 500, which is typically the top (NASCAR) event of the year,” Eichner said, shortly before the green flag dropped.

William Hill US director of trading Nick Bogdanovich said Darlington betting was up 30 percent from typical wagering on a NASCAR race and up 20 percent compared with the same event at Darlington last year. Circa Sports had an interesting situation while also outdoing its typical NASCAR race handle.

“Win handle was about the same as always. We write a lot because of our low hold percentage,” Circa sportsbook director Matt Metcalf said. “Matchup handle was two to three times as much.”

How much will be bet on Wednesday’s NASCAR race?

NASCAR is wasting no time making up for lost laps, with three more Cup Series races over the next 10 days. Betting odds aren’t yet up for Wednesday’s Toyota 500, also at Darlington, nor for the second of two races at Charlotte on May 27.

A repeat of Sunday NASCAR betting is highly unlikely, but a return to normalcy is expected, and that would still be good.

“We’ve seen a surge in betting interest as specific leagues have returned, followed by a bit of a drop back down to earth,” Eichner said. “We expect the future NASCAR races to be more on par with events from earlier this season.”

Based on what took place with Sunday’s NASCAR betting, things are going according to plan for South Point sportsbook.

“We did some nice business today. A lot of little stuff,” Andrews said. “Hopefully (Wednesday) is another good handle. It’s like I said a couple weeks ago, we’ll write a lot of tickets when sports first reopen, a lot of smaller tickets, and that’s what’s happening.”

Many online books and casinos offer bets on NASCAR odds and props. Check out the best sportsbooks available where you live. 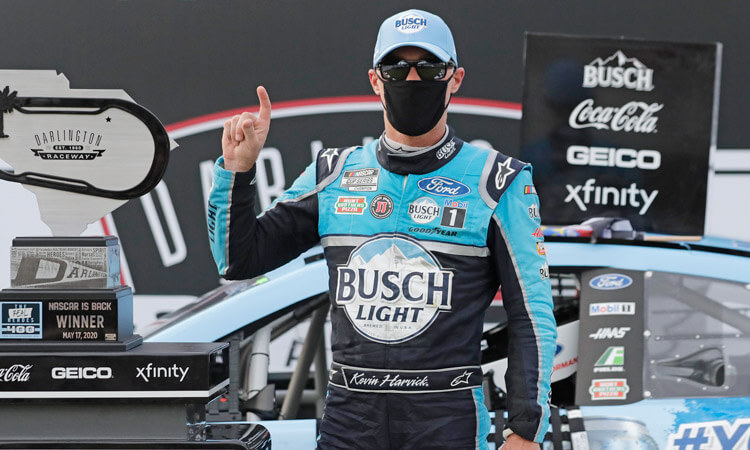 NASCAR betting booms with return to racing at Darlington
Provided by