It's been a season of change in NASCAR: New Gen-7 cars, several new drivers near the top of the Cup Series standings, and plenty of new races.

In keeping with the old being ousted, NASCAR is moving away from the double-header format at Pocono Raceway this weekend, with Kyle Busch leading the M&M's Fan Appreciation 400 odds.

Here are our best M&M's Fan Appreciation 400 picks and predictions for Sunday, July 24, with the green flag flying at 3:00 p.m. ET.

Picks made on 7/20/22 at 2:00 p.m. ET.
Click on each pick above to jump to the full analysis.
Odds courtesy of DraftKings Sportsbook.

He was ninth but should have won the first race last year and was runner-up in the second. He was fifth in 2020 and runner-up in June of 2019, too.

Busch has nine Top-10 finishes in his last 10 Pocono starts, including wins in four of his last nine. He was second and first, respectively, last year. While he’s backsliding into this weekend, this season has also proven that momentum doesn’t really matter from one week to the next either.

Pocono has been his playground lately. Hamlin has six wins there, including two in the last five. He was also runner-up in another for six Top 6s in his last seven Pocono tries overall.

He won the Saturday race of 2020 and was second in the Sunday one. Harvick also has nine Top-6 finishes — eight of which being in the Top 4 — in his last 11 Pocono starts.

Yes, he’s the hottest driver in NASCAR right now with four Top 2s in a row. However, he’s also had no finishes better than fourth at Pocono before, and four of his last five have seen him finish 12th or worse, at that.

He was fourth in his first Pocono start, but 39th, 17th, and 32nd, respectively, since.

A win and seventh-place finish last year to go along with a ninth in Race 2 of 2020 gives him three straight Top 10s on the track. However, he’s led just four laps outside of Las Vegas all season. He has no finish better than 12th in his last six, with three of his last four results being 32nd or worse.

Byron has struggled a lot lately. He hasn’t had a Top-5 finish since his Martinsville win back in April. Meanwhile, Chastain has six straight Top-8 results in 2022, beating Byron across the finish line in 10 of the last 11 races.

For the first time in decades, Pocono hosts just one NASCAR race this season. The last two years was a doubleheader format, but this one is back to a single race. How much does that change things? It could be a lot since there’s not any data to take with you from one race to the next.

Joe Gibbs Racing and Toyota, in general, has won seven of the last nine at Pocono. Hendrick Motorsports, however, looked the part last year too. Throw in Stewart-Haas Racing and you get 17 of the last 19 Pocono winners belonging to JGR or one of their affiliate teams — Hendrick and SHR. One of the two that they didn’t win was a fluke rain-shortened race in 2016.

SHR doesn’t look like they have the pace this year to keep up, but are worth plays due to their favorable odds. Pocono is a track that lends to varying strategies, so they’re worth a risk. That’s why JGR and HMS drivers are the ones to bet on.

Don’t get too hung up on qualifying this weekend. Only one of the last seven Pocono races have seen the winner come from the Top 4 rows. 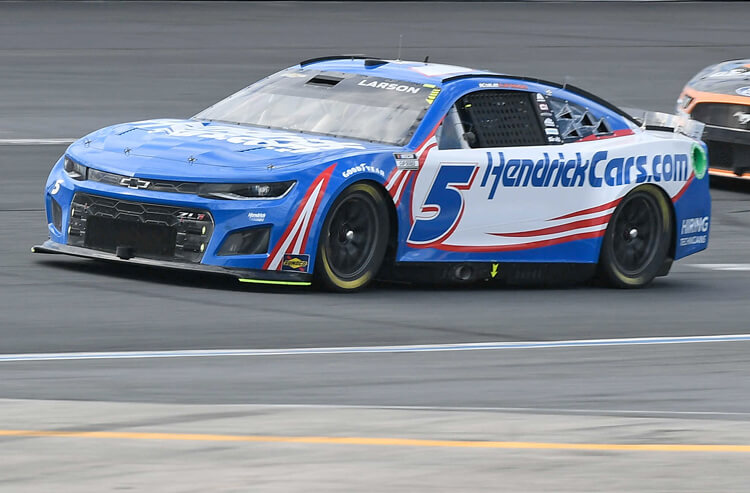