NASCAR is back on a road course this weekend in Wisconsin, at Road America in Elkhart Lake. Chase Elliott took the checkered flag last week and is the favorite here — is there any question who we're behind in our Kwik Trip 250 picks?

After Chase Elliott stood atop the podium last weekend, NASCAR heads to Wisconsin this weekend for the Kwik Trip 250, at Road America in Elkhart Lake.

Here are our best Kwik Trip 250 picks and predictions for Sunday afternoon in Wisconsin, with the green flag scheduled for 2:00 p.m. ET.

Picks made on 6/28/22 at 3:00 p.m. ET.
Click on each pick above to jump to the full analysis.
Odds courtesy of DraftKings Sportsbook.

He is the defending race winner and the most dominating road course racer in the sport right now. However, is his advantage gone on road courses, after going 0-for-2 this season and only 2-for-7 last year?

For his odds, I’d still take him on the off chance he comes out of it, especially coming off of a win last weekend.

He spent a lot of time figuring out road courses last season and it paid off. He was seventh here a year ago, which sparked a string of three Top-7 finishes in his last six road course starts to 2021. He then won COTA to start this year off and was seventh in Sonoma.

He was fourth in COTA and sixth in Sonoma to make me start to believe in him on road courses again. He also has three straight Top-6 results on the season too.

He’s always a threat on road courses and even won Indy last year. He was in the hunt for the win on the final lap in COTA and in the Top 10 before a late-race incident in Sonoma.

He’s a road racer by nature and was eighth and fifth respectively in the two road course races run this season. Also, he has four Top-11 results in the last five races this year.

He’s starting to heat up on the season (six Top 10s in the last eight races) and has two Top-11 finishes in the two road races in 2022 at that.

He was dominant on road courses last year but not so much in 2022, which is why we’re fading him again. He’s not had a Top 10 finish in either of the two road courses run this season and has just two Top 5s in the last seven races on the season overall.

Logano was 31st in COTA and 17th in Sonoma and he has just two Top-5 finishes on the season since late April — both were wins. I don’t foresee him winning on Sunday.

Busch’s road course finishes this season have been 28th and 30th, respectively. Chastain’s are first and seventh. Trackhouse (Chastain’s team) has won both road course events, with Busch’s team (JGR) going 26-27-30-31 the last time out in Sonoma.

Hendrick Motorsports won last week in Nashville, while Joe Gibbs Racing and Toyota combined to lead 253 of 300 laps that night in the same race. Also, if you combine the two of them on road course races entering the 2022 season, they had won 13 of the last 14.

The only one they didn’t win was AJ Allmendinger stealing the victory at Indy last August, when Denny Hamlin was spun while leading coming to the white flag.

However, they are 0-for-2 this season on road races. Trackhouse Racing has instead won both with Ross Chastain (8-1) picking up his first win in COTA and his teammate Daniel Suarez (20-1) in Sonoma.

Do you bite on HMS or JGR or fish elsewhere?

Six of the Top 9 drivers, according to the oddsmakers in the opening lines, belong to HMS and JGR.

I still don’t know, outside of Chase Elliott, if they’re worth the risk.

Toyota didn’t even manage to have a single driver in the Top 17 at Sonoma. I don’t think it would be wise for their current odds to pick them, either, which is why this opens up the door for more double-digit odds and favorite money-making opportunities.

The final green flag run was 17 laps last year, and 86% of the race ran under green flag conditions. 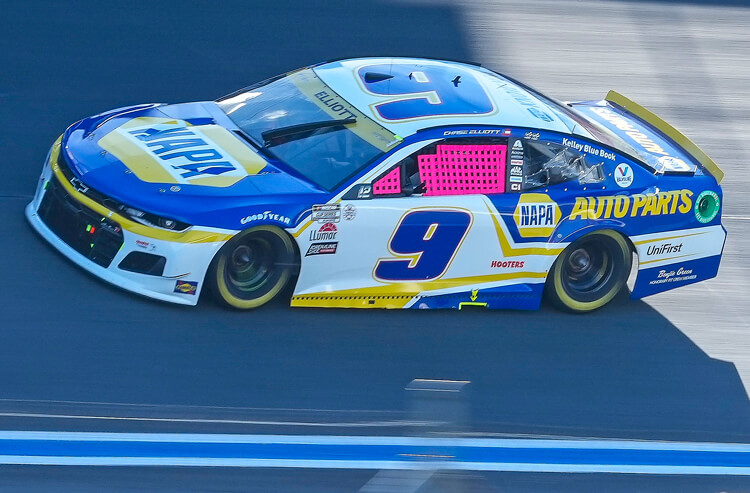