NASCAR is back In Michigan this weekend, at Michigan International Speedway. Tyler Reddick took the checkered flag last week but there's competition among the favorites here — check out our FireKeepers Casino 400 picks.

After Tyler Reddick stood atop the podium last weekend, NASCAR heads to Michigan this weekend for the FireKeeps Casino 400, at Michigan International Speedway.

Here are our best FireKeepers Casino 400 picks and predictions for Sunday afternoon in Michigan.

Picks made on 8/2/22 at 12:00 p.m. ET.
Click on each pick above to jump to the full analysis.
Odds courtesy of DraftKings Sportsbook.

He’s a great fantasy play, with ten Top 10s in 11 Michigan starts, but after three straight runners-up to start his Cup career at Michigan, he’s not had a Top 5 since. With how well he’s fared over the last six races (five Top 2s) and favorable odds, I’d snag him.

We know what he can do at Michigan’s sister track in Fontana (he won back in February), but he’s also had three wins at Michigan too and a third last year.

Hamlin has five Top 8 finishes in his last six Michigan tries, including two of the last four being runners-up, at that.

If you're signing up for a new sportsbook for this NASCAR season, here's two of the best bonuses* available:

A) Kevin Harvick to finish in the Top 5 BOOSTED to +350 at BetRivers! Claim Now

B) Denny Hamlin and Chase Elliott to both finish in the Top 5 BOOSTED to +300 at Caesars! Claim Now

Ford has seven straight Michigan wins. Ryan Blaney (+1,200) is great odds for a driver with five Top 10 finishes in his last seven Michigan tries, including a win a year ago. In fact, he had a shot to win Race 2 of 2020 before a late race crash.

His teammate Austin Cindric (+5,000) comes in as my top sleeper with these odds. He is coming off a runner-up finish at Indy last Sunday for his fifth Top 7 result in the last seven races run.

He swept Michigan in 2020 and won the August race the year prior. Harvick has four wins in his last six Michigan tries, including five Top 2s in his last seven in the Irish Hills overall.

He was 11th last year as a rookie and driving a Ford.

Nine straight Top 10 finishes at Michigan, including all but one in the Top 7 at that. However, this contract discussion has provided an unwanted distraction that he’s admitted is costing him sleep and focus. For these types of odds, and seven straight races without a Top 10, I’d fade him.

He’s coming off of a win and having three Top 2 finishes in five starts during the month of July, but 18th, 24th, and 29th are his Michigan finishes in Cup.

He was runner-up last year but has had no Top 10 finishes in his last six starts on the season and only one in the Top 13. His last Top 5 came in his Martinsville win way back in mid-April.

No Top 5s with HMS at Michigan, including his last three finishes being 21st, 36th, and 16th, respectively. He’s not had a Top 10 in any of his last eight races on the season, with four of his last six being 32nd or worse.

Busch is strong at Michigan. I get that. So is Hamlin, and you’re giving me plus money on a guy with five Top 8 finishes in his last six Michigan tries vs. a guy going through a tense contract fight that hasn’t had a Top 10 in his last seven starts on the season?

The Fords have won each of the last seven Cup races at Michigan but you’re getting great odds for them this week. Why?

Well, they’re struggling on the year now. A Ford driver hasn’t won since the first week of June, as that and a win on Mother’s Day are their only victories in the last 18 races.

Joey Logano wouldn’t normally be a wise play for him backing his way into the weekend, but he’s been strong at Michigan, as has Ford, and you get him at an opening of +2,000. He and Team Penske are phenomenal sleeper plays this week with Austin Cindric and Ryan Blaney all having some head-scratching odds. However, Vegas feels like maybe the Ford reign ends though too. Who can blame them?

RFK Racing hasn’t won a race since 2017 and that was on a superspeedway at that. Stewart-Haas Racing has two wins in the last 65 starts overall.

HMS has shown speed this year and Kyle Larson and Chase Elliott look primed for victory here. They may be the only Chevy drivers though. This race may be stolen from the outside manufacturer in Toyota.

This is Ford and Chevy’s backyard, but Toyota has the better drivers at Michigan now. Can they capitalize? 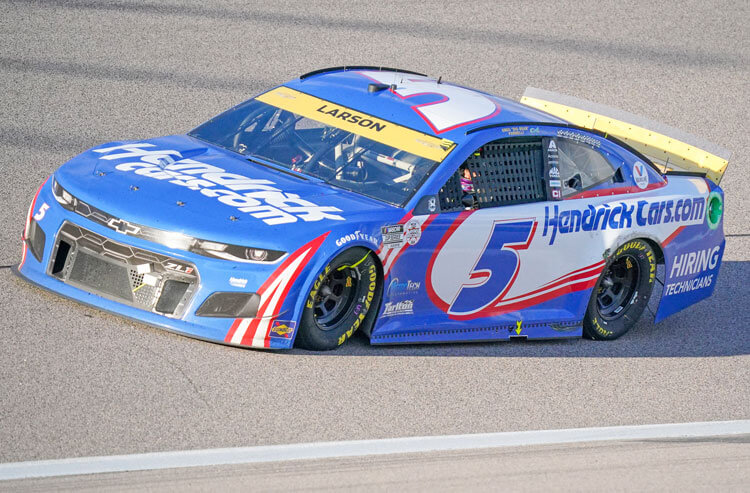