HMS is among the odds leaders again, but we think Joe Gibbs Racing's track record at Loudon speaks for itself. We're backing their drivers to keep dominating in our Ambetter 301 picks, as we break down this weekend's NASCAR action.

With the playoff race starting to heat up and several big names on the outside of the bracket looking in, we're hitting the stretch of the NASCAR season where every point is precious.

And the Ambetter 301 odds don't suggest easy pickings this weekend in Loudon, as the Cup Series contenders look to separate themselves from the fray.

Here are our best Ambetter 301 picks and predictions for Sunday afternoon at New Hampshire Motor Speedway, with the green flag flying at 3:00 p.m. ET.

Picks made on 7/14/22 at 4:00 p.m. ET.
Click on each pick above to jump to the full analysis.
Odds courtesy of DraftKings Sportsbook.

This could be their week. They’ve finished runner-up in six of the last nine New Hampshire races including each of the last four. The three they didn’t finish second in? They won.

On like tracks this season, they went 1-4-6-9 in Richmond, struggled in Martinsville, but rebounded to finish 2-6-9-34 at Gateway.

This is usually their get-right race. Kevin Harvick (+1,500) turned things around in this race in 2019 after entering it winless on the year. Aric Almirola (+3,000) did the same a year ago for his sixth Top 11 on this track since 2013. He was third in 2018, 11th in 2019, seventh in 2020, and that win last year. Gateway is a close comparison to New Hampshire, and Almriola was fifth there. Martinsville is another comparable track, where he was eighth.

Harvick won three of the last seven Loudon races including two of the last four. The two he didn’t win, he was fifth and sixth, respectively, leading the most laps in his sixth-place effort last year. At Phoenix, Richmond, Martinsville and Gateway, all similar tracks, he was sixth, second, 14th and 33rd. Chase Briscoe (+2,000) won  in Phoenix earlier this year, while Cole Custer (+25,000) was eighth and 14th in his two New Hampshire tries.

He has three Top 5s in five short-track races run this season, to go along with six Top-8 results in his last seven starts on the season, including three straight Top 5s.

He was fifth in Phoenix, sixth in Martinsville, and third at Gateway this year.

Chase Elliott (+700) is starting to look like a championship favorite again. However, this may not be the best place to reach his fourth straight Top-2 result on the season. The last Hendrick win at Loudon came back in 2012. Last year, they finished 7-9-18-21.

Kyle Larson (+900) does have four Top 10s in his last six tries there — including two runner-ups — but on short tracks in 2022, he’s finished 34th, fifth, 19th, sixth and 12th, respectively. Elliott has one Top 5 in eight starts and one short-track Top 5 all season — on a track that’s not comparable, at that.

Chastain has more Top 5s in the last three weeks than Logano has since April. Plus, Chastain has three Top 5s on short tracks this season.

Two of the Top-3 drivers in the opening odds belong to Hendrick Motorsports. That’s great for our wagering because we get our top drivers for +900 or longer odds.

Chase Elliott has three straight Top-2 results on the season. However, Hendrick Motorsports’ struggles at Loudon have opened the door elsewhere for this weekend’s race, which is why my picks are siding with longer shots.

The favorite has to be Joe Gibbs Racing, while the Stewart-Haas camp are the sleepers. If you’re daring, find a way to finagle some Team Penske drivers into your picks and you’ll likely have a winner from this grouping.

Joe Gibbs and Stewart-Haas are each backing their ways into Sunday’s race in New Hampshire but in saying that, this could also be the race that the doctor ordered for each too. Loudon has been a great place for Stewart-Haas in recent years, with them winning their first race of the season in two of the last three years here. They could badly use a win with only Chase Briscoe (Phoenix) having reached Victory Lane for them in 2022, and the other three drivers in their camp sitting below the playoff cutline.

JGR is also a bit behind again. They have two drivers with wins this season, but the other two are also squarely on the playoff bubble. The first two drivers out and behind them in points? The drivers to win two of the last three Loudon races (Kevin Harvick, Aric Almirola).

Almirola holds 18th place in points and beat Christopher Bell (16th place in points) last year. Truex Jr. is 15th and badly needs a win himself. 14th in the playoff standings is Ryan Blaney, who is searching for his first victory of the year himself.

So, the door is wide open this week, which helps boost our potential profits.

Starting position hasn’t mattered much at New Hampshire like it has elsewhere. Six of the last nine New Hampshire winners have come from a starting spot outside of the Top 12 (Aric Almirola was 22nd last year). 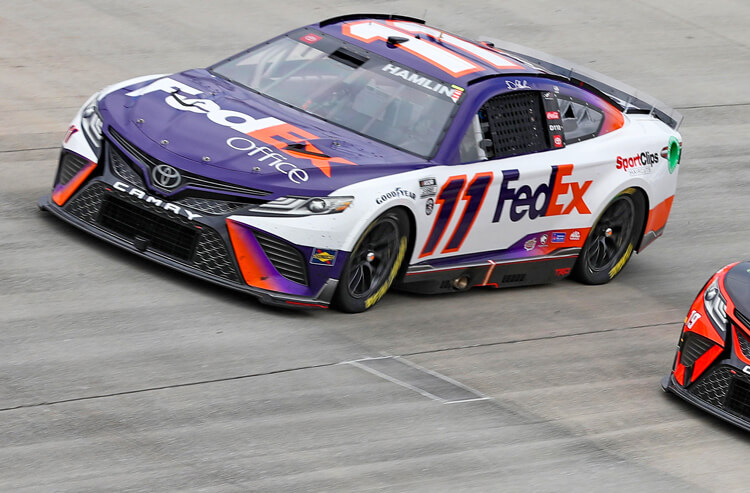