Toronto FC's been struggling mightily on defense of late, and Orlando City FC can make the most of limited chances. Find out why we're backing the home side's struggles to continue with our MLS betting picks for Saturday.

Following a solid start to their 2022 campaign, Toronto FC are in the midst of a four-match losing skid. After a week off to rest and regroup, they welcome the fourth-place side in the East as Orlando City visits with one of the best away records on the season. In five away matches this season, Orlando has tasted defeat just once.

The Lions have struggled to create chances this season, while the Canadian side can’t seem to prevent anybody from scoring. Will this be a cure for Orlando’s offensive woes, or will Toronto finally find a way to keep their first clean sheet in 20 matches? Here are our Toronto FC vs Orlando City picks and predictions for Saturday, May 14.

The weather in Toronto will be as perfect for a sporting event as you can get, with temperatures in the low 70s and plenty of sunshine. No rain is expected, and winds will be minimal throughout the contest.

While Toronto has fallen in four straight, they have reasons to feel a bit aggrieved about last week’s 1-0 defeat at Vancouver. After missing a first half penalty that would have given them the lead, things got worse when their opening goal was taken off the board by a VAR review. Jayden Nelson pounced on a rebound as Vancouver’s keeper was trying to recover it, but the goal was shockingly denied when the referee deemed he had kicked it out of the keeper’s hand.

Their hopes of ending an 18-match run without a clean sheet were dashed in the final minute of regulation when Vancouver stole all three points. Now, Toronto returns home hoping that a week of rest will do them a world of good.

Quite a few players who were missing for last weekend’s match will be available for selection, much to the delight of manager Bob Bradley. Having gone more than 200 minutes without scoring a goal, Toronto will hope the return of some familiarity in the side will ensure better possession and lead to better chances for Jesus Jimenez, whose seven goals are still tied for the league lead.

The Lions come to town on the heels of their first away defeat of the season, as they fell 4-1 to CF Montreal last weekend. A matchup of two of the Eastern Conference’s best sides, Orlando fell behind 2-0 but cut the lead in half, before a pair of goals in a three-minute span late in regulation secured the result. It was the first time in five away fixtures that they conceded multiple goals or failed to take a result.

Many of Orlando’s problems stemmed from an inability to generate chances. They attempted just two shots in the defeat, and their 102 shots this season are the third-fewest in MLS. However, they rank seventh in the league in passing completion percentage, and their defense is exceptionally stout away from home. Three of their league-leading five clean sheets have come away from home this campaign, and midfielder Joao Moutinho ranks third in the league with 25 tackles won.

Toronto might be getting bodies back, but that’s no guarantee of a result from this match. Their defense has had more holes than a Connect-4 board of late, and it should give Orlando more opportunities than usual. The visitors are also coming off a 2-1 win over Philadelphia in the US Open Cup at midweek, and will be high on confidence.

Until Toronto shows they have figured things out, it seems foolish to believe in anything other than their current form. In their five home matches this season, Toronto has already been defeated twice. Orlando’s defense should give Toronto fits for much of the match, and while I doubt they will keep another away clean sheet, I see no reason why the Lions won’t secure yet another result away from home. There is no value in the double chance play, so take Orlando to win with a draw resulting in a push, via the draw no bet wager.

While Orlando have not created the most chances this season, they have managed to convert a decent amount of them. In their 11 matches this season, the Lions have been held without a goal just twice, and they have scored in four of their five away matches this season. The only exception was a 0-0 draw in their first away match at Chicago. As for the hosts, it’s now been 19 matches since Toronto held a team off the scoresheet, and they're conceding two goals per match on the season.

Toronto players were dispossessed 19 times last week by Vancouver, and now face an Orlando City team that ranks as one of the best in the league at winning back the ball. This will lead to opportunities to hit on the counter, and I love the price for Orlando to find the back of the net multiple times. Take Orlando City’s team total over 1.5 as Toronto gives up multiple goals for the fourth time in five matches.

In the 15 meetings between these sides, only five times has either Toronto or Orlando City failed to score a goal. Furthermore, Toronto’s last seven home matches have seen at least three goals scored in each, with both sides finding the back of the net. Orlando’s last three matches (four if you count the USOC match) have also seen at least three goals scored, and they have failed to keep a clean sheet in their last two in league play.

These two sides both want to have the ball, and that sort of matchup tends to lead to more open play and more opportunities in transition. While Toronto is one of the only two teams with fewer shots than Orlando this season, they put nearly half of their attempts on target. Goals should be available in this fixture, and I love to ride trends when they’re consistently proving to be profitable. Take the prop or same-game parlay of both teams to score with over 2.5 goals scored at plus-odds as your Best Bet. 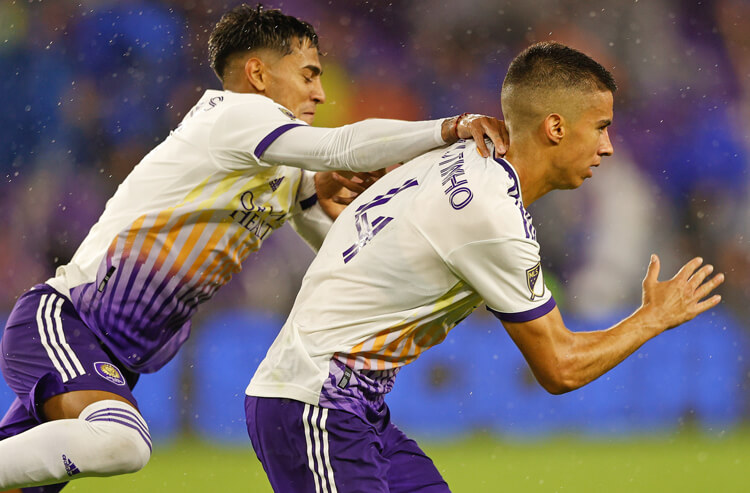 Los Angeles FC vs Austin FC Picks and Predictions: A Tale of Two Halves
Jason Ence | May 17, 2022
About Us
Contact Us
Careers
Our Team
Brand
Testimonials