Toronto FC's season has been a bummer thus far, but with some high-profile help on the way, they can still make a playoff push. Find out why this weekend's game is all about Insigne with our MLS betting picks for the matchup with Charlotte FC.

Lorenzo Insigne insanity has been idling as Toronto FC awaited the return to fitness of their massive signing. However, this could be the week that it shifts into overdrive, as manager Bob Bradley has given all indications that the Italian forward will make his debut in their home match against Charlotte FC on Saturday at BMO Field.

The hosts have made a series of key signings and trades to strengthen their squad for a hopeful playoff push, while Charlotte hopes to find a resolution to their poor road form after letting a lead slip last weekend. Will Insigne be the answer to Toronto’s offensive struggles, or will the visitors spoil the party? Find out in our Toronto FC vs Charlotte FC picks and predictions for Saturday, July 23.

A pleasant evening awaits the Toronto faithful on Saturday, with temperatures at kickoff sitting in the mid 80s and dropping throughout the match. There is no precipitation expected, and winds will be minimal.

With just 13 matches left in their season, Toronto sit eight points adrift of the playoffs — a key reason for the side’s aggressive transactions, starting with the arrival of Insigne. His playmaking ability and set-piece prowess is desperately needed by a squad that has failed to score in three of their last four matches, and has found the back of the net in just five of their last 12 in league play. It’s the biggest reason why they’ve tasted defeat in 10 of their last 14 matches.

A key factor behind their struggles is the poor form of striker Jesus Jimenez. Despite having just one goal in his last 12 matches, his eight goals still lead the team after he converted on nearly half his shots to start this season. His regression to the mean has exposed the lack of final-third creativity possessed by the side, a big reason the club splashed the cash for Insigne and compatriot Federico Bernardeschi. The right-wide winger just started training this week, and Bradley said he is hopeful to have him as a sub.

Big names from Europe won’t be worrisome to Charlotte, as they showed on Wednesday night. Their stoppage-time equalizer set them up for a penalty shootout win over Chelsea in a friendly, cleansing the palate after their capitulation against Inter Miami last weekend. The Crowns allowed a 2-0 lead to evaporate as they conceded a trio of goals inside the final half hour, dropping valuable points to a side with whom they’re battling for the final playoff position in the East.

It was just the second time all season that Charlotte have dropped points from a winning position after halftime, and marked the eighth in 11 matches away from home this season, with just five points from a possible 33.

The addition of Mark-Anthony Kaye in Toronto’s midfield has made their spine much more reliable, which could be just as important to their playoff hopes as Insigne’s creativity in the final third. The hosts are looking to end a 29-match run without a clean sheet, and nearly did so last week, with an own goal being the only blemish against Montreal.

With more consistent play in the center of the park, it should allow Insigne to get plenty of opportunity on the ball, and the frenzy surrounding his arrival will be evident in the stands from the moment he comes out for warmups. MLS debuts for big-name talents such as his rarely end in disappointment, and I see no reason that will change against a Charlotte side that simply can’t figure things out away from home.

Toronto’s first-half scoring woes have not been nearly as prominent at home as they have on the road — they’ve found the net in the first frame of seven of 11 home contests. While they’ve failed to score before the break in their last two home matches, they’ve played well but simply couldn’t create in the final third.

The introduction of Insigne will be a refreshing one and should lead to a goal before halftime. Charlotte have conceded first-half goals in more than half their road matches this season, allowing eight goals prior to the break.

Given the visitors’ short week and the taxing match against Chelsea, I expect Toronto to feed off their crowd’s energy and find a way through against them early in this one.

Having watched Insigne numerous times, as both an Italian national team fan and covering Serie A, I can tell you few players look to control a match from a wide area as much as he does. Insigne is adept at cutting inside and curling efforts on frame from all angles, and has never seen a shot he didn’t like. In addition, he’s got a lethal free kick if he’s given a chance anywhere inside of 30 yards.

Toronto have racked up the fourth-most fouls against per match this season — and that was before introducing the shifty dribbling of Insigne and Bernardeschi. Making matters worse for Charlotte, their four set-piece goals conceded this season are tied for second-most in the league, and it’s very unlikely anybody but the Italian winger would place the ball should Toronto earn one on Saturday.

Insigne will be looking to reward the fans for their fervor surrounding his arrival, and to help Toronto make a last-gasp push for the playoffs. Bet on him to find the back of the net in his debut match and double your investment on the wager. 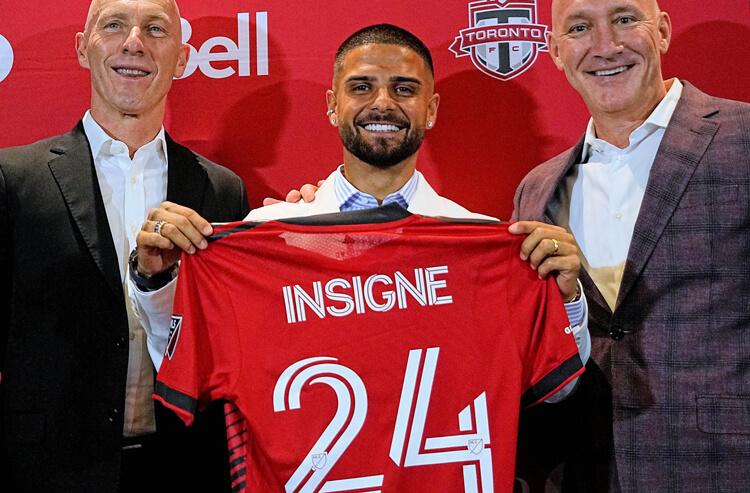