The 2021 World Series starts tonight, with Atlanta heading to H-Town for Game 1. The Braves come in at plus money, providing great value on a team that's thrived as an underdog, so why let up? Check out our MLB betting picks for Braves vs. Astros. 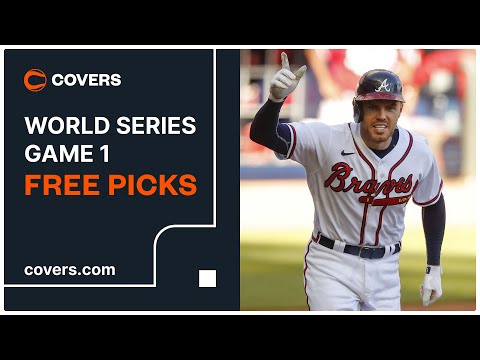 The Atlanta Braves and Houston Astros will begin the 2021 World Series at Minute Maid Park on Tuesday night.

The Astros, who have home-field advantage and are the MLB betting favorite to win the series at -141, are thin on pitching but heavy on hitting — while the Braves have a great blend of both.

Atlanta will send veteran Charlie Morton to the bump on Tuesday as a +115 underdog, while Dusty Baker and the Astros will counter with ground-ball lefty Framber Valdez (-135).

Here are our free picks, predictions and MLB odds for Braves vs. Astros, in Game 1 of the World Series, on Tuesday, October 26.

Charlie Morton (Postseason: 0-1, 3.77 ERA): The 37-year-old Morton will start Game 1 of the World Series for the Braves but don’t let his age fool you: He still throws gas and has 19 strikeouts in 14 1-3 postseason innings (three starts) this year. He last pitched on October 19 and will be on five days of rest. He struggled with command in his last start, allowing six walks, but gutted it out and still finished five innings allowing just two runs and three hits. Morton won a World Series with the Astros in 2017, where he pitched 10 1-3 innings in the finals, giving up just two runs with an 11:1 K/BB ratio.

Framber Valdez (Postseason: 1-0, 4.20 ERA): Valdez finally snapped out of his postseason pitching funk with a stellar outing in Game 5 versus the Red Sox, throwing eight innings and allowing one run. The lefty went into that game with a 7.71 ERA after struggling mightily in his first two postseason starts but despite a pair of rough outings, the ground-ball machine still owns a 2.77 ERA across 39 career postseason innings dating back to 2020.

The Over is 5-0 in the Astros’ last five World Series home games. Find more MLB betting trends for Braves vs. Astros.

The Braves are quite comfortable as the underdog so far this postseason, as they have been favorites just once in their nine games. But away from Truist Park, Atlanta is just 2-3 in the playoffs compared to a perfect 5-0 at home. It's a flip from the regular season, where the Braves actually had a better winning percentage on the road (.568) than at home (.525.), and while Charlie Morton pitched in two of those playoff road losses, Atlanta was competitive in both and lost each game by a single run.

Both teams feature great lineups and offenses that slug. The Astros finished the season as the highest-scoring team in baseball at 5.71 runs per game while the Braves finished third in home runs per game at 1.47. Taking in the strength of opposing pitchers faced, both these offenses are neck-and-neck in terms of production. Facing the Red Sox and being in the A.L., the Astros are going to have a higher runs-per-game average than Atlanta — we don’t see a true advantage offensively for either team.

These two teams have not met since 2017, so a direct comparison is out the window. Looking at the quality of opponents, Atlanta would seem to have had a tougher road. They beat one of the league’s best pitching staffs in Milwaukee and then knocked off the reigning champions in the Dodgers. The Astros beat the White Sox, who played in arguably the weakest division in baseball, and then beat a Red Sox team that had the worst starting rotation in the postseason.

Both teams have also pitched well in relief and will have a fully-rested bullpen heading into Tuesday night. The Braves bullpen is coming off an epic Game 6 performance versus the Dodgers and owns a 3.56 ERA in the postseason, while the Houston bullpen has logged insane innings and boasts a 3.42 ERA. Again, we see no advantage in either team’s relief pitching.

Individually, it’s more of the same. The Braves have Eddie Rosario while the Astros have Yordan Alvarez. Freddie Freeman and Ozzie Albies: Meet Alex Bregman and Jose Altuve. It’s tough to find an edge for either lineup as even the bottom of each order has talents like Kyle Tucker, Yuli Gurriel, Dansby Swanson, and Joc Pederson. The Braves will likely use Jorge Soler in the DH spot for Games 1 and 2.

Finally, getting to the starters, Framber Valdez has shown command struggles in two of his three starts in the playoffs and went 2 2-3 innings in Game 1 of the ALCS, allowing three runs and nine baserunners before getting the hook. If Valdez is on, he’s getting more ground balls than any other pitcher in baseball and even though he is coming off a gem, his two duds — and Dusty Baker's quick trigger to go to the bullpen — make us wary of Houston's price for the Valdez' uncertainties.

Morton, on the other hand, has a few more bankable stats. He’s faced the Astros three times over the previous two postseasons (while pitching for the Rays), picking up three wins in each start with a 0.57 ERA over 15 2-3 innings. All three of those starts were in Tampa Bay, but Morton has made three starts at Minute Maid Park in the postseason as part of the Astros and went 1-0 with a 2.20 ERA. Morton has the experience and if he can get through the Houston order — that he knows well — three times, the bridge to Tyler Matzek and Will Smith will be much easier.

On paper, these two teams are incredibly similar: two great bullpens, lineups that hit for average and power, two experienced baseball minds managing, and two quality starters getting the ball. The tipping for us is the price — and the apparent advantage Morton has.

We aren’t paying -125 in what we think is closer to 50-52 percent implied probability for the home team. That puts us back on the plus-money dogs and +115 on the Braves.

At the time of writing, there are still a couple of 8.5s available but for simplicity’s sake, we assume most bettors can only get the 8. This is the lowest total that the Astros have seen all postseason except for Game 1 of the ALDS — where Lance Lynn and Lance McCullers saw a total of 7.5 and the Astros still scored six runs.

Houston is 8-1 O/U in its last nine games while the Braves come into the finals 4-1 O/U in their last five. The Astros are averaging 6.7 runs per game while the Braves have scored on average 4.0 runs per game but that was also seeing three of the likely NL Cy Young finalists and two elite bullpens. Can both of these lineups put up four runs even if both pitchers do their job?

Rosario has 30 total bases and a 1.131 OPS in the postseason and his pull percentage on fly balls favors Minute Maid Park, which is tough to hit out anywhere other than down the lines. Alvarez is just as hot, with a 1.329 OPS, while Freeman, Pederson, and Kyle Tucker all have an OPS north of .900.

Valdez doesn’t give up many home runs (12 in 130-plus innings this year) but he has given up two this postseason while allowing 22 walks + hits in 15 innings. Morton is coming off a start where he allowed six walks and flirted with danger all game. He’s also given up a pair of long balls.

This is also the longest either bullpen has had to sit as the Astros last played on Friday while the Braves played on Saturday. Both bullpens were great in the Championship Series (with the exception of Luke Jackson) but it's possible that those hot arms get cold with the ramp down.

Both teams have hot batters and starters who have shown some flaws. This number should be a half-run higher in our judgement. Plus in the five games in Houston this postseason, the average total runs scored has been 9.6 per game.

Red Sox vs White Sox Picks and Predictions: Boston Clicking On All Cylinders
Andrew Caley | May 25, 2022