Atlanta is up 3-2 in the World Series but couldn't finish the Astros at home. They head to H-Town with two swings at it and our preview likes their odds against a shaky Luis Garcia. Find out the best plays in our Braves vs. Astros MLB betting picks.

The Houston Astros have forced Game 6 at home but are still facing World Series elimination versus the Atlanta Braves tonight as they go against left-hander Max Fried, who they beat in Game 2 at Minute Maid Park. Houston will answer with RHP Luis Garcia who picked up the loss in Game 3.

Houston opened as a -117 favorite on the moneyline but has since moved to -125 and hit -130 on some books. The total opened at 9 then went down to 8.5 with some books hitting the 9 again.

Here are our free picks, predictions and MLB odds for Braves vs. Astros for Tuesday, November 2.

Max Fried (Postseason: 1-2, 5.40 ERA): Max Fried has posted back-to-back rough starts having allowed 11 runs in 9 2-3 innings. The Astros got to Fried in Game 2 for six runs on seven hits and a walk. The damage wasn’t done on hard-hit balls as he allowed just one extra-base hit. He finished that game with his best postseason CSW (Called strikes and whiffs) of 32.5 percent and still managed to strike out six batters over five frames. He’s pitched at least 80 pitches in all four of his postseason starts and came in with the best ERA in the second half in baseball. The price for Fried in Game 6 (ATL +110) is the same as Game 2 when he started.

Luis Garcia (Postseason: 1-2, 7.62 ERA): 23-year-old right-hander Luis Garcia will get the ball for the Astros on short rest. The young pitcher has made four starts already in the postseason but has lowered his ERA from 25.55 to 7.62 with a pair of useful starts in his last two allowing just one run in 9 1-3 innings. Garcia saw the Astros in Game 3 of this series and although he surrendered just one run in three-plus innings, he gave up four walks with two of the three hits going for extra bases. Garcia is a fly-ball pitcher and is pitching on three days of rest.

The Under is 5-0 in Garcia's last five interleague starts. Find more MLB betting trends for Braves vs. Astros.

The Braves took two of three at home but failed to wrap up the season in Game 5 as the Astros overcame an early 4-0 deficit to win 9-5 at cold Truist Park. Now with a second life, Houston returns to the warmer confines of Minute Maid Park where it is 5-2 SU in the postseason and averaging 5.57 runs per game. The Astros come in as the betting favorite but with starter Luis Garcia coming in on short rest (three days), Atlanta might have the starting pitching advantage despite the -130 Houston ML price tag.

Garcia was not great in his last start in Game 3 last Friday. He escaped by allowing just a single run in 3 2-3 innings but he struggled with command, had just four called strikes and stranded six base runners over his first three innings. He pitched exceptionally in his last home start versus Boston going five scoreless innings but imploded in his other home start versus the Red Sox giving up five runs while recording just three outs. Garcia is a true question mark and will likely give way to a Houston bullpen earlier rather than later.

The Houston bullpen owns a 2.85 ERA in the postseason and has given up just five runs over 25 2-3 innings in this series (1.75 ERA). Garcia having last pitched on Friday means he is coming in on just three days of rest and will likely give way to this Houston relief squad early. The familiarity factor is starting to lean into the Braves’ favor having seen this bullpen already for 25-plus innings while Atlanta can lock it down as well having won Game 3 versus Garcia by a final score of 2-0. We see a slight edge to Atlanta in starting pitching while the Astros even things out with their bullpen.

Max Fried didn’t look great in his Game 2 start versus the Astros but this could be a great example of the boxscore telling the better picture. He still managed to get five innings in, struck out six and had 28 of his 86 pitches as a called or swinging strikes. Atlanta is paying the same tonight as it did in Fried’s Game 2 start which shows the books don't value the Atlanta starter any differently after the statistically rough outing last Wednesday. Fried still led all of baseball with a 1.74 second-half ERA over 14 starts this season.

The Houston offense hasn’t been anything special in this series despite all the hype as the league’s highest-scoring offense. The Astros are hitting just .234 in the series and .189 in their losses. However, it’s been the lack of power that is more concerning for Houston backers as Tuesday's home side has just two home runs through five games and just 12 extra-base hits (53 total bases.). That’s compared to Atlanta’s eight long balls and 72 total bases.

Houston has at least seven runs scored in their two victories over the Braves while it scored just four total runs in their three losses. Expecting this Houston offense to light it up every night in the postseason is a tough ask. They took starter Max Fried for six runs in Game 2, but Houston’s four-run second inning came on the backs of five singles in the inning. Hardly dominant.

Atlanta has shown it can win the close game with eight of its 10 wins coming by three runs or less while Houston has relied too heavily on lopsided scores to stack wins as eight of its nine wins have come by four or more runs.

Both bullpens are rested with the day off yesterday and we’re expecting a low-scoring affair Tuesday night which has us picking the team with the advantage in starting pitching and a slight edge in offense in the Braves. Game 7 is not necessary.

The series is 1-3-1 O/U through five games with the total for Game 6 as low as 8.5 or 9 leaning to the Under. The series has seen two totals of 9 with the Over failing to hit in both of them. Houston is 2-2-1 O/U at Minute Maid Park this postseason while the Braves are 3-3-1 O/U on the road in the playoffs.

Fried’s starts haven’t been pretty but the Braves are 1-2-1 O/U in his four postseason starts and 3-6-1 O/U since the beginning of September. Fried held opposing batters to a .190 average in the second half while 19 of his 27 hits allowed in the postseason have all been singles. If Fried does falter, Atlanta can go to a bullpen that has been great in four of the five games of this series and owns a 3.24 ERA in the postseason.

Garcia is a hard pitcher to handicap from a total perspective. He has been a mixed bag so far this postseason with a gem mixed in between a couple of clunkers. However, pitching on three days of rest is not a common thing and for such a young pitcher, we doubt Dusty Baker lets him see more than 18 batters. The best case for the Under is if Baker turns to his bullpen early and we see another battle like Game 3’s 2-0 Atlanta final.

Pitching is more consistent than hitting and with neither team hitting above .250 in the series and Houston struggling to go deep having hit just two long balls through five games, we are hesitant to hit the Over. Both bullpens have been fantastic and if Fried can stay away from the inside to Houston’s pull-happy right-handed hitters with the short porch in left, we have no problem paying a little juice on a total of 9. The difference between 8.5 and 9 is massive and worth the price (20 cents) in our opinion. 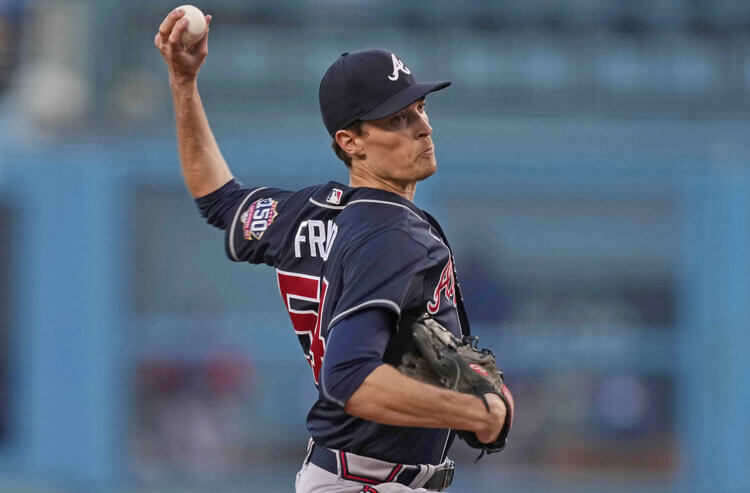 Braves vs Astros World Series Game 6 Picks and Predictions: Will Braves Close The Deal?
Provided by