What you should know about betting the Grand Salami

The Grand Salami - a bet where the player chooses the Over/Under for totals runs scored in all games on a given day - can be incredibly difficult to handicap.

One of the most popular baseball propositions through the years has been the Grand Salami, a bet that allows players to choose the over/under for total runs scored in all games on a given day.

The Salami can be incredibly difficult to handicap, particularly on days when there’s a full schedule of games. That, perhaps more than anything else, might explain why sportsbooks rarely take significant action on one side over another.

However, that doesn’t mean sharp bettors can’t find value on the Salami in certain situations.

“On the surface, this would seem like a bet wiseguys might avoid,” Todd Fuhrman, race and sportsbook analyst at Caesars Palace in Las Vegas, told Covers.com. “But, I think it caters to a sharper player.”

Some bettors assume the Salami total is created by simply adding up the over/under for all games, but that isn’t the case. For instance, the combined total for Wednesday’s games was 119.5, yet the Salami was listed at 125.5 at most books.

“It’s primarily a formula-driven number that requires a little tweaking before it hits shelves,” said Fuhrman, adding that no Caesars properties book the Salami. “To try and build an organic total on a 15-game baseball card gets tough, so (books) arrive at a figure and adjust accordingly.”

What makes the Salami hard to predict is the fact that a few games can screw up a wager entirely. On any given day, for example, San Diego and Milwaukee could combine for 19 runs while Detroit and Minnesota could combine for one.

Another thing to consider is the weather: If one game is postponed due to rain, the entire bet is canceled.

“Is there an element of chance? Sure,” Fuhrman said. “When 15 games are on the slate, one or two games can blow things up. But on smaller cards, there can be plenty of value if a handicapper has a great read on a few totals.”

The question then becomes one of evaluating whether or not the Salami total is soft enough to warrant a play. Often times, the extra cushion can make the difference between a winner and a loser.

“I tend not to bet the Salami on Monday’s short cards,” said Covers Expert Teddy Covers. “The more games and the higher the Salami, the less chance one individual outlier result - whether it’s 1-0 or 10-9 - will affect my wager negatively.”

Teddy Covers estimates that he plays the Salami less than 10 times per year, but one rule of thumb is that he never takes the over on getaway days.

He said the two factors he’s most likely to consider are weather and pitching.

“I’ll look at Overs when there’s a heatwave over the East or Midwest, particularly on a day where there are a host of fourth or fifth starters going,” Teddy Covers said. “I’ll look at Unders when it’s cold back East or in the Midwest and when most teams had an off day the previous day - so the bullpens are fresh and ready to close out games without shenanigans.”

Professional handicapper David Malinsky spends considerable time charting bullpens to help him spot fatigue. On days when multiple bullpens are overworked and top closers are unavailable, he might consider a play on the over.

“This can be particularly valuable on warmer days when having bad relievers come into play and can lead to a few big innings over all of the games on the board,” Malinsky said. “It is the one aspect of this wager that the oddsmakers do not properly adjust for.”

Unfortunately, as former Covers Expert Sean Murphy points out, the books have accounted for just about every other variable, making it difficult to place a wager with any sort of real confidence.

That’s why he suggests sticking to more traditional bets.

“I tend to think you would be better off betting individual games based on numbers you come up with,” Murphy said. “With the Salami, there are just so many elements in every game on the board to consider.

“(It’s) definitely not something you want to invest too heavily in.” 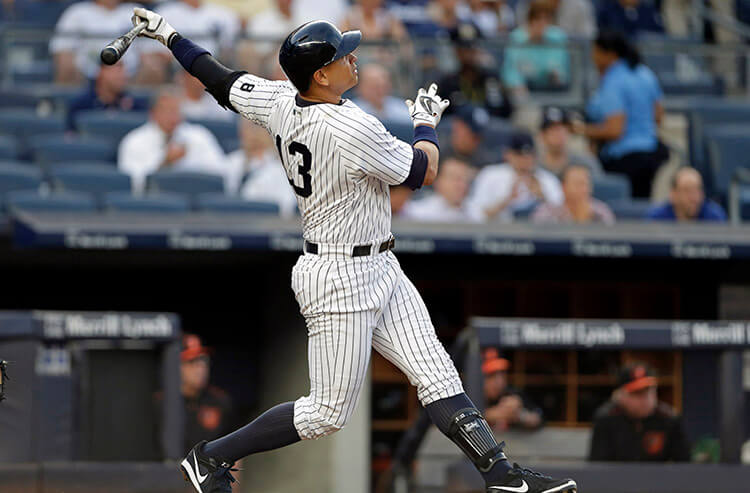 What you should know about betting the Grand Salami
Provided by

Today’s MLB Prop Picks: Ryu Gets Back In Form Against Reds
Zachary Cohen | May 20, 2022