"I do recognize the significance of gambling to the popularity of sports. It’s hard not to look at the way people write about it out there."

Covers Staff
Last Updated: Feb 27, 2015 4:17 AM ET
Photo By - USA Today Sports
Newly appointed commissioner of Major League Baseball, Robert Manfred, spoke at the Sloan Sports Analytics Conference in Boston today. He was interviewed by ESPN personality Brian Kenny and covered just about every topic you can think of in baseball.

There's one, of course, I care about above all others and if you're reading this, it's likely the same one for you: sports betting. And Manfred addressed it.

Kenny opened the subject up by saying "Gambling: what's your opinion?"

That was met with a momentary awkward silence and muttered laughs from the audience.

"I'm sorry, was that abrupt?" quipped Kenny to some more laughs.

This is exactly what Manfred said after that and I'll let you form your own opinions:

This one you have to have a little historical focus. Rule 1 is: We will always have rules that make sure gambling - legal or illegal – will not have any impact on the play of the game on the field. Integrity is Rule 1. That will always be that way.

In terms of the ‘away from the field” issues associated with the legalization of gambling – I think that enough has happened out there that it’s incumbent upon me and my staff to take to the owners the developments in this area, to have a conversation about some of the rules that go beyond the play of the game on the field that we’ve had traditionally in baseball and revisit those.

It’s such a fundamental policy that I think it will only get changed as a result of a conversation with the 30 clubs.

I’ll say two more things. I do recognize the significance of gambling to the popularity of sports. It’s hard not to look at the way people write about it out there, so you know, we do think about that issue.

I give Adam Silver a lot of credit for sort of starting the debate. Without embracing everything that he said, I think certainly the idea of having a uniform federal system to govern gambling -- whatever that system is. That it’s illegal or that’s not illegal – whatever it is – uniformity at a federal level seems like a pretty good idea to me.

Brian Kelly: So it seems like fantasy baseball and fantasy sports are kind of morphing into that changed approach.

We try to maintain a pretty clear line between what we see as fantasy products on the one hand and what we see as gambling on the other.  I think fantasy is an important part of fan engagement. I think it’s particularly important for young fans. And I think it’s an area where we need to do a better job.

Our difficulty is that our fantasy products need to evolve in a way that they don’t require quite the 162-game, 183-day commitment that the traditional fantasy crowd might not.

I think we need to develop games that require a less constant commitment. We know guys who play fantasy who are so into it they don’t have time for their real jobs. It’s a big time commitment and I think it’s important to have games that have a little less of a commitment.

Jon Campbell is the managing editor for Covers and is at the Sloan Sports Analytics Conference in Boston this weekend. Follow him @CoversJon 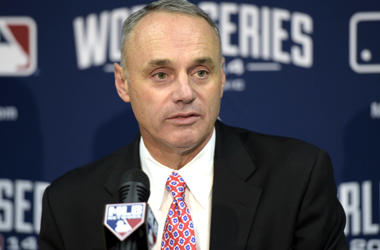