Giants vs Dodgers Picks and Predictions: San Fran Foiled Yet Again in L.A.

With Clayton Kershaw pitching and a history of comfortably beating the Giants this season, the Dodgers are poised to keep streaking towards the playoffs. See why our MLB picks can't fade the legend on the mound.

The San Francisco Giants and Los Angeles Dodgers will play the rubber match of their three-game series on Wednesday afternoon at Dodger Stadium. The Dodgers evened up the series with a 6-3 win on Tuesday after the Giants took Monday’s opener.

Los Angeles comes into Wednesday’s finale as a big home favorite. We’ll discuss whether it can live up to that billing in our free MLB picks and predictions for Giants vs. Dodgers on September 7.

Giants vs Dodgers picks and predictions

After a slight blip on Monday, the Dodgers continued their season-long domination of the Giants on Tuesday, running their record to 11-4 against San Francisco this season. Outside of a sweep in San Francisco in June, Tuesday was the only time the Giants have beaten Los Angeles all season.

Not only have the Dodgers put up an impressive record against their NL West rivals, but they’ve done so without much drama. All 11 Los Angeles wins in the season series have come by at least two runs, with eight victories by three runs or more. That history is one of several factors pushing me to back the Dodgers on the run line tonight.

Los Angeles will play behind Clayton Kershaw on Wednesday. Kershaw made a solid start in his return to action on September 1 after missing a month due to a lower back injury. After a tough first inning, the southpaw allowed just one run on a single hit while striking out six over five innings against the Mets.

The Giants will likely stack their lineup with right-handed bats, just as they did against Tyler Anderson on Tuesday. That move proved only minimally effective, however, as San Francisco mustered just three runs in seven innings against the Dodgers starter.

L.A. should continue to rake, as they have against virtually all pitching all season long. Dodgers hitters have put up an .805 OPS over the last four weeks, blasting 41 home runs over 26 games in that span.

Giants starter Alex Cobb will try to slow down the Dodger offense, but he hasn’t been able to do so in his two previous appearances against Los Angeles this year. Cobb is 0-1 with a 5.25 ERA over 12 innings in those two starts.

The run line play on the Dodgers looks great in a vacuum, and the pitching matchup makes a comfortable win for Los Angeles even more likely. I’m backing the Dodgers -1.5 in Wednesday night’s game.

The Dodgers continue to roll towards a potential 110-win season. At 93-42, Los Angeles holds the best record in the majors, 6.5 games better than the Houston Astros. The Dodgers also lead MLB in run differential at +294, pulling off the impressive feat of both scoring the most runs (726) and allowing the least (432) in the league this year.

San Francisco managed to hang around in the National League Wild Card race for much of the summer. A seven-game losing streak at the end of August likely ended those hopes, however. The Giants are just 17-26 since the All-Star break. They now stand at 65-69 on the season, and are 8.5 games out of the final Wild Card position in the National League. With just 28 games left to play, San Francisco’s postseason hopes are on life support.

The Dodgers have been particularly tough to beat at home, going 48-18 at Chavez Ravine this year. That has carried over to the season series with the Giants, as Los Angeles has put up a 7-1 mark against San Francisco at home in 2022. San Fran is just 28-37 on the road this year in comparison.

Most sportsbooks opened the total for Wednesday’s game at 9, but it has come down sharply across the board, with the consensus Over/Under now settling at 8 runs. That movement makes sense, as both teams are throwing good pitchers coming off strong starts.

Kershaw isn’t the pitcher he once was, and he’s struggled with injuries this year. But in his 90 innings of work, he’s put up an impressive 2.59 ERA with strong peripheral numbers. San Francisco starter Alex Cobb has allowed just seven hits over 12 innings in his past two starts without giving up a single run.

While many regard Dodger Stadium as a pitcher’s park, it hasn’t lived up to that billing in recent years. In 2022, Chavez Ravine ranks seventh in Park Factor for runs scored, and ninth for home runs. Of course, the Dodgers can hit anywhere, but they have put up 5.48 runs per game at home this year, slightly better than their road output (5.28).

The Dodgers and Giants have combined for plenty of runs in their meetings this season as well, averaging 8.2 runs per game. They’ve been even more prolific at Dodger Stadium, putting up nine runs on average.

Alex Cobb (5-6, 3.58 ERA): Alex Cobb has enjoyed something of a West Coast renaissance over the past two years. After pitching well for the Los Angeles Angels last year, he has been a solid addition to the San Francisco rotation in 2022. His 2.84 FIP suggests he has pitched even better than his ERA indicates.

Cobb has thrown well as of late, allowing no runs in 12 innings over his last two starts. Most recently, he picked up his fifth win of the year against the Philadelphia Phillies on September 2, giving up just three hits while striking out seven in seven innings of work.

Clayton Kershaw (7-3, 2.59 ERA): Dodgers legend Clayton Kershaw continues to excel, even in his 15th season, at least when he can stay on the mound. Injuries have slowed the lefty in 2022, but he has still put up great numbers in his 90.1 innings of work. Kershaw has backed up his 2.59 ERA with a 2.70 FIP and a stellar 0.974 WHIP, earning his ninth All-Star Game selection.

Kershaw missed most of August with a lower back injury. He returned on September 1, giving up just one run on one hit over five innings to the New York Mets. Most importantly, Kershaw reported no issues with his back during that start, raising hopes that he can bolster the Los Angeles rotation down the stretch and into the postseason.

The Dodgers are 8-1 in their last nine games against the Giants in Los Angeles. Find more MLB betting trends for Giants vs. Dodgers 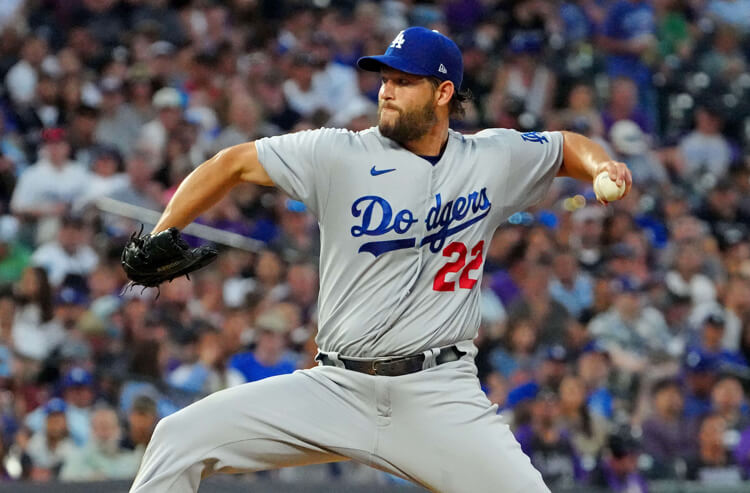 Giants vs Dodgers Picks and Predictions: San Fran Foiled Yet Again in L.A.
Provided by