The NL West rivals meet in a winner-take-all Game 5 on Thursday for a chance to play the Braves in the NLCS. San Francisco will turn to Logan Webb, who fanned 10 in a Game 1 win. Find out why we like him to deal again in our Dodgers vs. Giants picks. 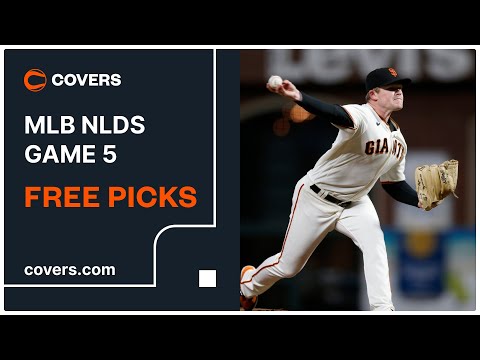 The San Francisco Giants and Los Angeles Dodgers will meet in a winner-take-all game Thursday to see who advances to the NLCS to face the Atlanta Braves.

San Francisco will start Game 1 hero Logan Webb, who will be on five days of rest, while Los Angeles is countering with Julio Urias. The lefty threw five innings of one-run ball in a 9-2 victory in Game 2.

With everything on the line, books have opened this do-or-die game as a pick'em with the total set at 7 after opening at 6.5.

Here are our free MLB betting picks and predictions for Dodgers vs. Giants in Game 5 of the NLDS on October 14.

(Editor's Note: These picks were made prior to Thursday afternoon's news that Corey Knebel would start Game 5. However, according to MLB.com's Juan Toribio, Knebel will serve as the opener before Julio Urias pitches the bulk of the innings.)

Julio Urias (Postseason: 1-0, 1.80 ERA): The Dodgers’ best lefty needed just 72 pitches to go five innings in his Game 2 start at Oracle Park. Urias allowed just three hits while striking out five and walking one. The southpaw gives nothing away for free and has just six walks allowed over his last seven starts. The Game 5 starter hasn’t lost since June and owns a 2.68 postseason ERA that includes 19 appearances.

Logan Webb (Postseason: 1-0, 0.00 ERA): Webb started this series with a gem in Game 1 after going 7 2-3 scoreless innings and striking out 10 while walking none. It may be the best pitching performance so far in the postseason. Webb keeps the ball in the park and has the best ground-ball rate in the NL. San Francisco is 23-5 SU over his 28 starts this season and has a 1.90 ERA at home this year.

Dodgers: Max Muncy 1B (Out).
Giants: Brandon Belt 1B (Out).
Find our latest MLB injury reports.

The Dodgers are 3-8 SU in the last 11 meetings. Find more MLB betting trends for Dodgers vs. Giants.

A team that won more than 105 games this season will not be heading to the NLCS. Everything is on the line in Game 5 and the Giants have to be comfortable with Webb getting the start.

Webb set the tone for the series with his performance in Game 1, tossing 7 2-3 scoreless innings and only needing 92 pitches to punch out 10. The Giants are a perfect 4-0 SU in Webb’s starts versus the Dodgers this season. Webb, who entered this season with fewer than 100 big league innings under his belt, proved in Game 1 that the spotlight isn’t too big for him. He was priced as an underdog for the series opener but now finds himself at -110.

The Giants haven’t been plating runs with ease this series but that was to be expected heading into the best-of-five series. In the two wins (4-0 and 1-0), San Francisco has gone 10-for-60 at the plate. This may scare some, but SF has shown it can win in these low-scoring affairs, while the Dodgers have won their two games by a combined score of 16 to 4. No NL team had a better record in one-run games than the Giants (31-17 SU) this season and if Webb and the bullpen can keep it close, we like the advantage the home side has.

We doubt Urias goes longer than five innings again. He lasted just 72 pitches in his Game 2 victory and Dave Roberts has had no problem using his bullpen for 12 outs in this series. The Dodgers bullpen is elite but Joe Kelly and Blake Treinen have already given up runs and there is a danger of using four relievers again.

San Francisco may not be built to string together three singles, but it is good at going deep and finished with the most HR/game in the NL. This contest could be won by a single swing of the bat and we just like the Giants’ depth with 10 guys swatting 10 or more long balls this year. The Giants are hitting .274 versus Urias this season and have taken him deep three times over 29 innings. We liked this lineup and pitching matchup in Game 1 and we’re hitting it again for this must-win game.

The Under is 2-0 in San Francisco’s two wins and the Giants have managed just nine runs over the four games this series. In the two contests that the Dodgers have won, the Over is 2-0 as L.A. hung 10 total runs on San Francisco's relievers after getting into the bullpen in the second inning in Game 4 and in the sixth inning in Game 2. We won't see anything but the best relievers, even in a lopsided score, and with the day off between games, all arms will be available.

Webb has a 60 percent ground-ball rate which is why we saw an opening total of 6.5. The Giants’ right-hander has given up just four homers at Oracle Park this year and just one over his last 50 innings. He’s on full rest and riding a ton of confidence. Urias has also been keeping the ball in the park, allowing just four homers over his 79 innings in the second half this year.

The series has produced 25 runs over four games but both clubs are hitting a combined .214. Thursday’s game features two elite, low-HR starting pitchers and the two best bullpens in baseball. Neither starter walks many and they’ve already proven to be ready for postseason success with wins in the series. Runs will be at a premium, which means bunting and more outs for us. Each team will be using their best pitchers right to the final out, which could possibly include a starter. We love hitting the Under on these series-deciding games.

You can bet on MLB odds at every online and casino sportsbook, including MLB moneylines, run lines, Over/Under totals, and a ton of MLB prop odds. Head over to our best baseball betting sites for MLB odds in your area.