Boston and St. Louis have both been trending up the standings on the backs of their bats — something's gotta give Saturday, right? Or maybe, with the wind at their backs, they'll just keep smashing in runs, as our Cardinals vs. Red Sox picks predict.

Saturday's matchup between the St. Louis Cardinals (37-29) and the Boston Red Sox (35-30) will feature two of the hottest teams in the last month. The Red Sox struck first on Friday night, holding on for a 6-5 win after allowing four runs in the top of the ninth.

Tonight, they will send an unfamiliar face, Kutter Crawford, to the mound, who is being thrust into a starting role due to injuries. Across from him will be Dakota Hudson, who will look to give the Cardinals a fighting chance in this three-game set.

Continue reading for free MLB picks and predictions for the Cardinals vs Red Sox interleague matchup on Saturday, June 18th.

This season has been largely solid for Hudson, allowing more than three earned runs just twice thus far. One of those instances, however, came in his last outing, in which he allowed nine hits and six earned runs in seven innings against the Reds.

Kutter Crawford (1-1, 5.74 ERA): Crawford appeared just once last year and gave up five earned runs in two innings. He started the season with the team but was sent back to the minors by mid-May following a start that included an 8.44 ERA.

Due to injuries, Crawford has found himself back in the big leagues as a starter and, to his credit, he held the Mariners to just one hit and no earned runs across five innings.

A little over a month ago, the Cardinals were a deflating 20-18 and the idea they could sit atop the NL Central anytime soon seemed a bit optimistic. But to everyone's surprise, they have already gotten there, going 17-11 since then, despite losing the last two. St. Louis has seemingly sorted out its roster during that time, as each had glaring issues staring them in the face once upon a time.

Albert Pujols is amidst a resurgence after returning to his original ballclub, serving as a more-than-capable platoon bat that also can fill in against softer-throwing pitchers. Highly-touted prospect Nolan Gorman was too good to keep down in the minors, and moving Tommy Edman from second base to shortstop made way for him. The largely unexpected breakout of rookie Juan Yepez helped further round out a lineup that ranked 21st last year in run production.

In the rotation, Miles Mikolas (2.62 ERA this year vs 4.15+ ERA in each of the last two seasons) returning to his 2018 All-Star form has been a huge boost. Adam Wainwright continuing to defy the laws of aging has also helped the top-end of their lineup, while Matthew Liberatore being a serviceable middle-of-the-rotation arm as a rookie (4.00 ERA) has helped immensely as well.

And of course, the continued quiet excellence from Dakota Hudson is arguably the oil that keeps the machine running. Hudson has been highly reliable throughout his young career, never once pitching above a 3.35 ERA and putting together a 28-13 record. His 3.29 ERA is great in comparison to most, but is on the high-end for him - speaking further to his understated excellence.

He will go to war against a Red Sox lineup that is a large part of the reason why they similarly have gone from a 14-22 start to a 35-30 record today. Since May 18th, Boston is third in batting average, seventh in slugging percentage, ninth in strikeout rate. Prior to that, it ranked 22nd in runs scored per game, today it ranks eighth.

If turning the ship around is the theme of today's game, Kutter Crawford has a chance to contribute to that narrative. Crawford appeared in just one game last year, a spot start in which he allowed five earned runs in just two innings of work. Crawford made the Opening Day roster as a relief arm but was sent down by mid-May following a tumultuous start.

He was called up last week for a start against the Mariners, and held them to just one hit and zero earned runs across five innings. He did walk four batters, however, which has been a problem for him in his young career. But the Cardinals aren't an overly respectable team in that regard, ranking just 13th this season in walk rate this season.

Saturday's total of 10.0 is a tad unique, as double-digit totals are hard to find outside of Coors for the most part, but one glance at the weather explains the vast majority of it. The wind will be blowing 18 miles per hour out to right, setting up a few more balls to make their way around Pesky's Pole.

An argument could realistically be made for either team for Saturday's contest on national television. Both teams have been scorching hot in the last month and bats on both sides have been particularly productive as well.

With that in mind, combined with the wind blowing very favorably out to right, the better proposition is to side with runs continuing to pour in for these two ballclubs. 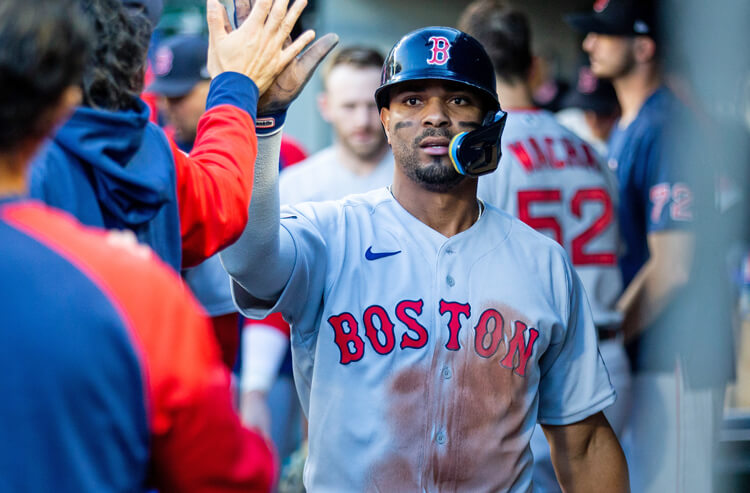