The new F1 season couldn't have started better for Ferrari's Charles Leclerc, but successive wins for Max Verstappen have shifted the picture. Leclerc isn't the F1 betting favorite but our Spanish Grand Prix picks expect a statement weekend from him.

The European portion of the F1 calendar and a new phase of the season will get underway in Barcelona this weekend, with Spanish Grand Prix odds favorite Max Verstappen looking to continue to make up ground in the title race.

Adding a layer to race weekend at the Circuit de Catalunya is the importance this race has to the calendar. As the location of preseason testing, a track that has been in on the calendar for years, and one that's fairly varied in its characteristics, it's where teams will begin to bring in major upgrades to that season's car.

That factor weighs heavily into our Spanish Grand Prix picks and predictions, and a tense title race as well.

Much has been made of Mercedes' poor start, made all the more glaring by scenes of Lewis Hamilton toiling away in the midfield, but no team came out of the gates worse in the new era of F1 than McLaren.

After effectively raising the Titanic in recent years and bringing a once-proud team back toward the front of the grid, they got the new regulations all wrong and were shockingly slow to start 2022.

However, slow improvements race-after-race cumulated with Lando Norris earning a podium in Imola two races ago, giving reason for optimism as the season progresses. That optimism has been furthered ahead of the Spanish GP, with early reports suggesting major upgrades could see as much as a 0.5-second improvement on a per-lap basis.

At the center of these upgrades are new brake ducts, with the original ones causing severe cooling issues and derailing both the car's reliability and the team's ability to develop in the preseason.

A season that began with two retirements in Bahrain and another in Saudi Arabia has, more recently, featured both cars finishing in the Top 6 in Australia and the aforementioned podium for Norris in Imola.

With their straight-line speed never in question and the terrible brake duct issues reportedly behind them, McLaren should continue to feature in the upper midfield more consistently. That's the case for Norris in particular, with the young Brit continuing to prove his outstanding ability amid a difficult season, with his two DNFs sandwiching impressive finishes of seventh, fifth, and third.

If you're chasing slightly better odds, a double points finish for McLaren (+150 at bet365) is a worthwhile play. I'm backing Norris to finish in the Top 6 here, with his session-by-session consistency and the lesser risk of bad luck (which has marked some of Daniel Ricciardo's season) an effective tiebreaker.

With better days looking likely for McLaren, however, either pick could deliver good value on race day.

The fight appears to be one that will swing back and forth depending on the circuit and in saying that, Spain should see Leclerc extend his championship lead after Verstappen made major grounds in the previous two races.

While Barca is famously a blend of high- and low-speed corners, as well as a long start/finish straight, nearly every part of this track leans toward the advantage Ferrari holds in its downforce. Let's run through it sector by sector.

The first sector, beginning with the start/finish straight, is where Verstappen should pick up the most time to Leclerc. However, two things mitigate what should be a Red Bull edge here. The straight ends with a heavy braking zone into a right-handed turn one and then quickly into a left-hander and a winding half-circle. Ferrari's setup enables it to carry far more speed through corners than Red Bull, which should allow Leclerc to brake later into turn one than Verstappen, eating into whatever time advantage was built in the straight.

That's before considering Ferrari's upgrades ahead of this race, which includes the floor and wing, and are expected to make up as much as 0.2 seconds per lap to its title-race rivals. To gain so much time on a per-lap basis, while only trailing in one sector, should make a tremendous difference to the outlook of this race.

The middle sector has six winding corners, followed by a brief straight into sector three. With four braking zones in quick succession here, Ferrari's speed in corners will give Leclerc an edge.

And then there's the third and final sector, which famously is the greatest indicator for success at the next race — in Monaco, the sport's slowest track where downforce is absolutely everything. With seven turns and a chicane that grinds the lap to a halt, sector three is the closest thing to a winding street circuit we have at a purpose-built track in F1. It is a near-certainty we'll see Leclerc, or his teammate Carlos Sainz Jr., posting purple sectors (fastest overall) here repeatedly in practice, qualifying, and the race.

So, it's fair to have high expectations for Ferrari and Leclerc on Sunday, but we can extract further value by backing him to top qualifying as well. It's not exactly a leap of faith, with Leclerc arguably the best single-lap driver on the grid.

That showed through in 2020 and '21, when he strung together some fabulous qualifying sessions in a relatively uncompetitive Ferrari, and is shining in a title-contending car in '22 with three pole positions and three fastest laps to his name in five races.

Both of Leclerc's wins this year have come from pole and if he is to win on Sunday, everything points toward that trend continuing. I would comfortably double down on Leclerc to win the race even if Verstappen were to beat him to pole on Saturday but am putting my faith in the Monegasque driver to deliver on both days for Ferrari.

Charles LeClerc has four career F1 wins. All came from the pole. Six of the last eight races in general (dating back to last season) have come from the pole, including three of the five taking place in 2022.

When it comes to the track in Spain, five of the last six years have seen the pole winner triumph. LeClerc is on the pole and has been the fastest in all three practice sessions this weekend. Don’t overthink this.

These are great odds for a team that has both drivers starting in the points already. Kevin Magnussen has finished in points in three of the five races run this year, while Mick Schumacher was on his way to that feat last race before some late contact with countrymate Sebastian Vettel. On a track notoriously difficult to pass at, this is an intriguing pick. 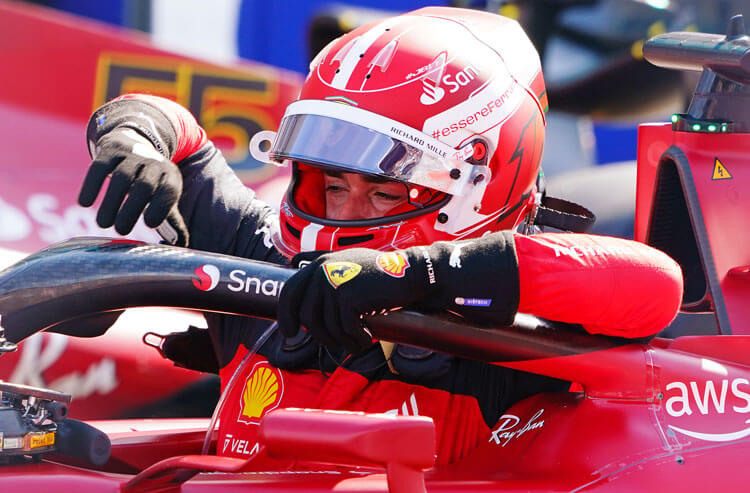