The bad has massively outweighed the good out of Ferrari this season, with early season promise far, far behind it. Since then, Red Bull and Max Verstappen have dominated. Get the latest Drivers' and Constructors' Championship odds below.

The 2022 F1 season is only three races into its second half, after the sport returned from its summer break with the Belgian Grand Prix to end August, but we may already be looking ahead to next season.

After an eventful first half of the season, the World Drivers' and Constructors' Championship odds are off the board as Max Verstappen has won five straight races to put one hand on the title. The defending Drivers' Champion can clinch the title at the next race, in Singapore.

With the season headed toward the home stretch, here's how you can bet on Formula 1 odds for the Drivers' and Constructors' Championship, even with Verstappen and Red Bull in command.

The question that lingers around the Drivers' Championship fight isn't who will win — it's whether Red Bull will lose another race before the season's over.

A dominant season for Red Bull and its lead driver, Max Verstappen, reached a new height in Spa. Verstappen started 14th and tore through the pack to win, with teammate Sergio Perez second, whilst spending most of the race lapping at an unmatchable pace.

Verstappen holds a 116-point lead over Charles Leclerc and was a -10,000 favorite here before the market closed.

It would be quicker to highlight the races in which Leclerc hasn't dealt with heartache, as opposed to the ones he has. Regardless, a combo of bad luck and bad team strategy has seen a once-promising title challenge fade, with the Ferrari driver a distant second.

With a nine-point lead over Red Bull's Sergio Perez, however, Leclerc is the heavy favorite in the Drivers' Championship "without Max Verstappen" market, coming in at -300.

While Leclerc is a short -300 in that market, Perez comes in with the second-best odds, at +550. Red Bull's second driver hasn't had a great season, despite some highs, but he remains in touching distance of Leclerc for second — and, crucially, in the grid's best car.

A handful of early-season DNFs led to a sizable Ferrari advantage in the standings but since Imola, it has been almost all Red Bull. Red Bull has already built a 139-point lead over Ferrari, dominating as its title challenger struggles.

The reliability issues that have marked the early parts of the season are really the only reason Red Bull's lead isn't greater, with its car clearly the grid's strongest.

As much as Red Bull has won the Constructors', Ferrari has lost it. Though its most successful season, in terms of points, in many years, this has been a season of embarrassment. Race after race, Ferrari ends as the joke. However, it may also end as second in the Constructors', and is a -350 favorite to finish ahead of Mercedes.

Thanks to excellent consistency from George Russell and Hamilton, Mercedes has hung around in the Constructors Championship. The defending champions are in third, 35 back of Ferrari for second, and can be had at +250 to beat the Italian team in the final standings.

Hamilton's dominance of Formula One is simply astounding: not only has he won six of the past eight years, but the two years he did not win the Drivers' Championship he finished in second place by five and eight points, with both runner-up finishes coming down to the final lap of the final race.

Mercedes has won the Constructors' Championship in each of the past eight seasons and is a favorite to do so once again in 2022.

How to bet on F1 futures odds

The most popular way to bet Formula One futures is by simply picking the winner of the F1 World Drivers' Championship. The champion is crowned via a points system based on the final race results of each drive. While the winner is not officially given the title until the final race of the season they can secure the championship with races remaining on the schedule.

Another F1 futures bet is the World Constructors' Championship which is awarded to the constructor (the team that builds the components of the car) who accumulates the most points at the end of the season. In 63 seasons, only 11 times has the winning constructor not been on the same team as the winner of the World Drivers' Championship.

This means that on a $100 bet, you'll stand to profit $1,200 if Norris wins the Drivers' Championship. If it's close to the end of the season or one driver is simply that dominant, you might see a minus sign (-) ahead of their odds.

This means that you would need to bet $175 to win $100 on Hamilton winning the Drivers' Championship. 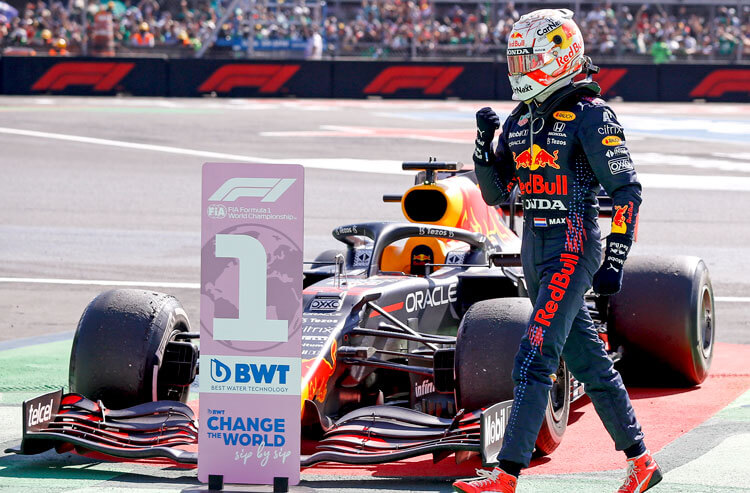 Singapore Grand Prix Picks and Predictions: Work to Do for Verstappen on Race Day at Marina Bay
Alistair Corp | Oct 1, 2022