Lewis Hamilton has won a race each season he has been in F1 — but time's running out in 2022. Check out the Brazilian Grand Prix odds board to see Hamilton's chances of a win in Sao Paulo, where he'll start on the front row.

Both titles are decided and we're down to the penultimate race of the 2022 Formula 1 season, as the sport descends on Sao Paulo for the Brazilian Grand Prix.

While it no longer holds its place on the calendar as the season finale, the Brazilian GP still holds a place in the hearts of both drivers and fans, as one of the best circuits on the grid and one that has been host to some iconic moments.

Many of those moments belong to Lewis Hamilton, who is still without a win this year but will start Sunday's race on the front row. Find out how Hamilton stacks up in the Brazilian Grand Prix odds below.

With his most recent win, Verstappen set the record for most wins in a season but he has work ahead to add to that on Sunday, as he will start third.

Despite another competitive weekend in Mexico, Lewis Hamilton and Mercedes were unable to find a first win of the season. Hamilton's record of having won a race in every season he's raced in F1 is down to its penultimate race but there are few tracks the seven-time champion would rather win at than Brazil.

Some of the highest highs in Hamilton's career have come here, and the country embraces him like no other — so much so that Hamilton was awarded with honorary citizenship earlier this year — with driver and country sharing adoration for the late Ayrton Senna.

Hamilton will have a strong chance at a victory on Sunday, starting on the front row in second.

Despite starting the sprint race in third, Mercedes' George Russell will start on pole in Sunday's race after overtaking Max Verstappen for the race lead and not looking back during Saturday's sprint. 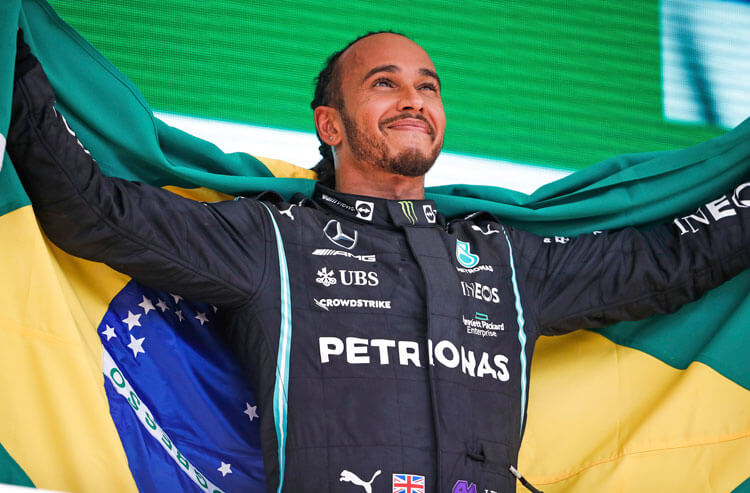