Stampeders vs Tiger-Cats Week 7 Picks and Predictions: Stamps a Dangerous Dog with Bo Levi Back

Calgary is 21-7 ATS in its last 28 games as a road underdog and its offense is trending in the right direction with the return of star QB Bo Levi Mitchell. Find out if we like him to help the Stamps cover again in our Stampeders vs. Tiger-Cats picks.

Week 7 in the CFL season kicks off on Friday night with the Hamilton Tiger-Cats hosting the Calgary Stampeders at Tim Hortons Field.

CFL betting lines opened with the Ti-Cats installed as 3.5-point home favorites with the Over/Under at 41.5 but both lines have seen movement due to recent injury news. The Stamps are now 2.5-point underdogs with the O/U at 43.5.

Here are our best free Stampeders vs. Tiger-Cats picks and predictions for September 17.

The Stampeders are 21-7 ATS in their last 28 games as a road underdog. Find more CFL betting trends for Stampeders vs. Tiger-Cats.

The Tiger-Cats are coming off a 17-16 loss to the Argonauts to fall to 2-3 SU this season. Quarterback Dane Evans was forced out of that game with a lower-body injury and with 2018 All-Star Jeremiah Masoli still nursing a rib injury, third-string QB David Watford has been named the starter for Saturday.

After leading the league in yards per pass attempt in both 2018 and 2019, the Ti-Cats rank second-last in that category this year. Injuries to top receivers Bralon Addison and DeVier Posey have hurt the passing game, and now 2019 MOP winner Brandon Banks has been added to the IL as well. The Ti-Cats' offensive line has also been a problem, with Hamilton's quarterbacks absorbing a league-high 20 sacks.

The Stampeders had their own star passer Bo Levi Mitchell return to the lineup last week and, although he looked rusty, he led Calgary to a 32-16 win over Edmonton. Mitchell has a resume as one of the CFL's top QBs and he will likely get back to his typical elite play sooner rather than later.

That was just the Stamps' second win of the season, with Calgary looking like a rebuilding team as opposed to the contender it had been for more than a decade.

Both of these teams have been inconsistent this season but the Stampeders at least seem to be trending in the right direction offensively. The Stamps are also getting points in Week 7 and have gone an outstanding 21-7 ATS in their last 28 games as road underdogs. Grab Calgary and the points.

Defensive tackles Ted Laurent and Dylan Wynn were banged up to start the season but they're both healthy again and the Ti-Cats front four is looking like one of the best units around. Hamilton has allowed fewer than 20 points in four of five games this season. And in the one contest where the Ti-Cats allowed more than 20 points, their offense turned the ball over four times and made things much tougher for their stingy stop unit.

That said, Hamilton has struggled on the offensive side of the ball, ranking second-last in the league in scoring, yards per game, and yards per play.

The little success the Ti-Cats have enjoyed on offense has often been due to the play of All-Star returner Frankie Williams, but it won't be easy for the speedster to rip off long returns against the Stamps. Calgary has the league's best kick coverage numbers in the league against both punt and kickoff returns.

With the Under cashing in seven of Hamilton's last eight games, back it again on Friday.

Did you know that if you parlayed this week’s CFL Stampeders vs. Tiger-Cats picks, you could win $26.45 on a $10 bet? 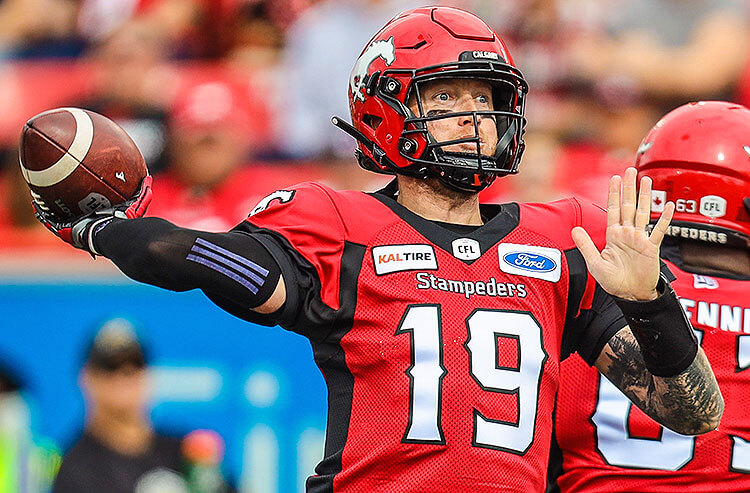 Stampeders vs Tiger-Cats Week 7 Picks and Predictions: Stamps a Dangerous Dog with Bo Levi Back
Provided by

Lions vs Alouettes Week 7 Picks and Predictions: Can BC Take Advantage of Montreal Coming off Bye?
Rohit Ponnaiya | Sep 16, 2021

Argonauts vs Roughriders Week 7 Picks and Predictions: Riders Get Back to Their Winning Ways
Rohit Ponnaiya | Sep 14, 2021