Saskatchewan has struggled lately, with three losses in a row, and has issues to solve. However, a Week 10 game in Edmonton will provide temporary relief — our CFL betting picks for Roughriders vs. Elks break it all down.

Week 10 in the CFL wraps up on Saturday with a West Division clash between the Saskatchewan Roughriders and Edmonton Elks.

The lowly Elks are coming off yet another beatdown and could have their hands full with a talented Riders team fresh off a bye and looking to turn things around after a three-game slide.

Here are our best free Roughriders vs. Elks picks and predictions for August 13.

This line hit the board with the Roughriders installed as 4-point road favourites with the Over/Under at 48.5. Early money has come in on the Riders, who are now up to -5.5 or -6 as of 5 p.m. ET on Friday. The total has ticked up slightly to 49.

The Elks are 3-13 ATS in their last 16 home games. Find more CFL betting trends for Roughriders vs. Elks.

Roughriders vs Elks picks and predictions

The Elks are coming off a 46-14 beatdown at the hands of the Lions last week, the third time they've lost by more than 30 points to BC within the last 10 months.

It's been a tough year in Edmonton for head coach Chris Jones, who had led the team to a 2-6 start as he mixes and matches different lineups on both sides of the ball.

He seems to have settled on Taylor Cornelius as his quarterback for now, with the sophomore completing 59 of 99 passes for 683 yards, a pair of touchdowns, and three picks in three games.

At times, Cornelius can be half-decent, but he isn't the long-term solution, and the same can be said for the rest of Edmonton's lineup. The running game has stalled ever since James Wilder ended up on the IR, the offensive line has been a sieve, and the defense is dead-last in the CFL in both yards allowed per rush (5.4) and yards allowed per pass (10.3).

To be fair, the Roughriders have issues as well, especially with their roster gutted by injuries. That said, they have a better QB in Cody Fajardo, and although their defensive line is missing three starters, their linebacker corps and secondary are good enough to give them a sizable edge on defense as well.

While the Riders have lost three games in a row, the first defeat in that span was an extremely close loss on the East Coast, and the second was a contest in which they were missing a ton of players and were starting a third-string rookie at QB.

Although their 32-17 home loss to the Lions two weeks ago was embarrassing, they'll have a much easier with this matchup on Saturday, especially with the extra week to prepare.

Both of these teams have been brutal offensively this season, with Edmonton last in the league with 5.3 yards per play and Saskatchewan just one spot behind it with 5.8.

That said, I still think that Saskatchewan has enough talent to put up points against a terrible Elks defense that ranks last in the league in nearly every metric.

Sure, the Riders' offensive line has done a poor job of protecting Fajardo, but the Elks' pass rush is non-existent. Saskatchewan also has an excellent running back duo in Jamal Morrow and Frankie Hickson, and they'll be able to gash an Edmonton defense that surrenders 123.1 rushing yards per game.

While the Elks' offense has been awful, it hasn't been historically bad, and the Riders' defense has taken a massive step back ever since their Week 5 win against Ottawa.

Saskatchewan had gotten its season off to a 4-1 start thanks to a stop unit that was leading the league with 4.6 sacks per game and holding foes to 292.4 yards per game. But after defensive tackle Garrett Marino was suspended and ends Pete Robertson and AC Leonard ended up on the IR, the Riders have averaged just 1.7 sacks per game while surrendering 402.7 ypg.

Two days ago, Robertson claimed that he was ready to play, but Riders beat reporters said he isn't active and wasn't listed on the final depth chart.

I don't think Cornelius and the Elks are going to torch Saskatchewan's defense like Rourke and the Lions did two weeks ago, but they should be able to do enough to push this game Over the total.

The banged-up Riders haven't looked impressive lately, but they are still the much better team on paper in this matchup. Jones and the Elks don't even really seem that concerned with winning at the moment, and he seems satisfied to continuously tinker with his lineup and plan for the future as he gets his preferred players in place.

This is looking more and more like a season where you want to consider fading the Elks at every opportunity, and 5.5 points isn't a ton of chalk to swallow.

Also, keep in mind that playing at home hasn't exactly been an advantage for the Elks, who haven't won in Edmonton since their name change and have gone just 3-13 ATS in their previous 16 contests. 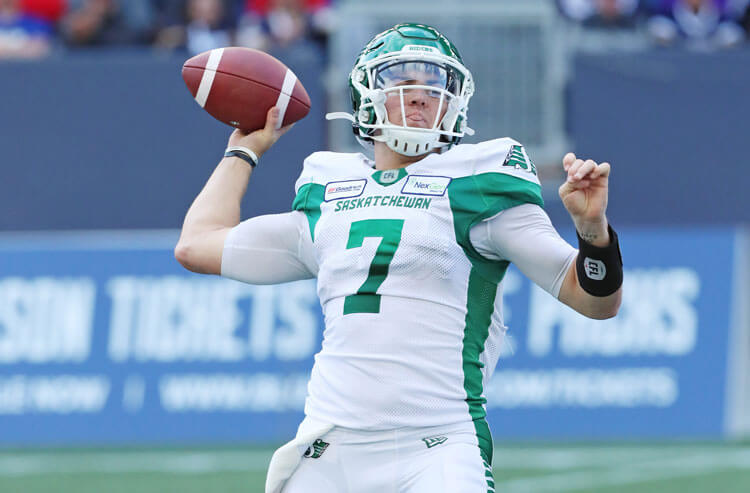