Winnipeg and Hamilton's Week 15 meeting is a Grey Cup rematch, but it won't be a Grey Cup preview. The Blue Bombers look primed for a third straight trip but the Tiger-Cats are struggling — our CFL betting picks have more. 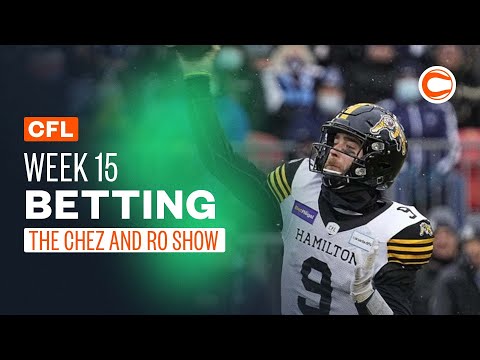 The Winnipeg Blue Bombers take the CFL's best record to Tim Hortons Field, where they face off against the Hamilton Tiger-Cats on Saturday.

These teams faced off in the last two Grey Cups and while the Blue Bombers look like they'll return there this season, the Ticats are at the bottom of the East Division with a 3-9 record.

CFL betting lines opened with the two-time defending champion Bombers as 8.5-point road favourites for this Week 15 matchup with the Over/Under at 46.5.

Here are our best free Blue Bombers vs. Tiger-Cats CFL picks and predictions for September 17.

Spotting the Ticats more than a touchdown at home, coming off a bye, seems a bit generous when you consider how many close games the Bombers have played this season (seven of their 12 wins have come by seven or fewer points).

That said, with how turnover-prone the Tabbies have been and how disciplined and mistake-free the Bombers are, I'm leaning towards Winnipeg in this spot.

Keep in mind that Winnipeg is 4-0 SU and ATS in the last four meetings between these teams and last year's Grey Cup was the only contest that was even close. This version of the Ticats is the worst that we've seen during that span and the franchise seems to be in a downward spiral, with both Evans and head coach Orlondo Steinauer on the hot seat.

It's also worth mentioning that while this line has ticked down to -7.5 as of noon ET on Thursday, sportsbooks have a massive 11-point disparity for the team totals with the Bombers at 28.5 and the Ti-Cats at 17.5 on bet365.

That shows just how much faith the oddsmakers have in Winnipeg's surging offense and how little confidence they have in Hamilton's attack.

The Blue Bombers cruised to a 54-20 victory against the Roughriders last week, and with a 12-1 record, have already gone Over their preseason wins total with five games left on the schedule.

Winnipeg is fourth in the CFL in net offense (347.1 yards per game) and tied for second in net defense (331 ypg) but its clinical play on offense and opportunistic defense have resulted in an average scoring margin of plus-9.4 points per game.

The Ticats have been the exact opposite. They are a respectable fifth in net offense (346.4 ypg) and are tied with Winnipeg for second in net defense but a league-worst turnover margin (minus-23) has resulted in an average scoring margin of minus-6.6 ppg.

Hamilton's defense hasn't been forcing enough turnovers and the Tabbies offense has been giving away the ball way too much, which has been mostly the fault of quarterback Dane Evans, who has thrown 13 interceptions and lost six fumbles in nine games.

Evans has been playing through a lingering shoulder injury (which is allegedly why the Ticats didn't dress him two weeks ago) but the bye should help with his recovery. Nonetheless, he has looked mentally broken this season and career backup Matt Shiltz could replace him when he comes off the IR.

Hamilton's usually stout defense might regress with banged-up defensive ends Julian Howsare and Malik Carney missing practice on Wednesday while All-Star linebacker Simoni Lawrence and cornerback Ciante Evans are still sidelined with injuries of their own.

Winnipeg also has some key injuries to keep an eye on, with wideout Drew Wolitarzky and defensive back Nick Taylor doubtful after getting hurt last week. The Bombers were already missing their top receiver in Greg Ellingson, as well as boundary corner Demerio Houston, so their depth at both crucial position groups will be tested.

Evans is a turnover machine but at least he can attack vertically, which Hamilton was sorely missing when its offense got shut down in Week 13 with Jamie Newman and Jalen Morton under center.

While the Tabbies mustered just eight points in that game, they had cashed the Over in their previous four contests with a total combined score of at least 54 in each of those games.

Those sloppy Ticats turnovers have led to good field position for opposing offenses and Winnipeg's attack has already been clicking. Last season's CFL Most Outstanding Player, Zach Collaros, is the best passer in the game and the Bombers' ground game which was struggling earlier in the year now has the league's second-leading rusher in the improving Brady Oliveira.

With the Bombers scoring more than 30 points in four of their last six games and their defense not quite as strong on the road as they are at IG Field, the Over 46.5 looks tempting. 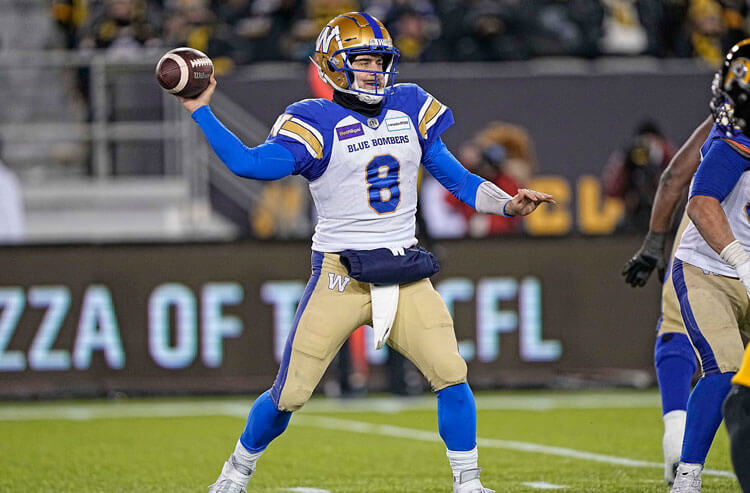