The Argonauts and Alouettes are the East Division's two top teams and both have dealt with instability at QB this season. Our picks highlight what will be the difference in a closely contested game between Montreal and Toronto.

Week 12 in the CFL begins on Friday night with a clash between the top teams in the East Division, as the Toronto Argonauts face off against the Montreal Alouettes.

Both of these squads are on three-game win streaks and CFL betting lines opened with the Argos as slim 1-point road favorites for this contest at Percival Molson Memorial Stadium.

Here are our best free Argonauts vs. Alouettes picks and predictions for Friday, October 22, with kickoff at 7:30 p.m. ET.

The Alouettes are 0-6 ATS in their last six home games. Find more CFL betting trends for Argonauts vs. Alouettes.

The big news on Sunday was Montreal trading for two-time Grey Cup winner Trevor Harris to shore up the quarterback position, with Vernon Adams Jr. on the IL. However, Harris will need to be brought up to speed with a new playbook and teammates, so the Als will likely start Matthew Schiltz for the second week in a row on Friday. Schiltz got the job done with an efficient performance against the Redblacks but the Argos are a far tougher team to contend with.

The Argos are fresh off a bye and have won three games in a row, a streak which began on September 24 when they beat the Als 30-27 at BMO Field. Toronto is now 6-3 and has a one-game lead on Montreal in the East Division standings.

The Argos have a strong all-around squad and Mcleod Bethel-Thompson has emerged as their No. 1 quarterback, with Nick Arbuckle on the sidelines after returning from a hamstring injury on Labour Day. Bethel-Thompson shredded the Ti-Cats' strong stop-unit for 388 yards through the air in Week 10 and now faces off against a Montreal secondary that is allowing the third-most yards per pass attempt in the CFL, despite playing five games against the league's two worst passing attacks in Ottawa and Hamilton.

There isn't a whole lot separating these teams but the Argos have more talent on defense and the better QB at the moment, which has me backing them as 1-point faves.

Both of these teams have been vulnerable on the defensive side of the ball and productive on offense. While the Als will be somewhat limited by the passing ability of Schiltz, they will once again do damage on the ground.

Montreal leads the CFL with a whopping 146.9 rushing yards per game on 5.8 yards per carry and it should have the league's leading rusher, William Stanback, back in the lineup after he missed Week 10 with a rib injury and Week 11 with food poisoning.

That's bad news against an Argos team that has been susceptible against the run, surrendering 5.2 yards per carry and a league-high seven runs of 20-plus yards.

Meanwhile, the Als allowed 8.4 yards per pass attempt and will have a tough time containing a Toronto aerial attack that is beginning to fire on all cylinders. With the Argos going 6-1 O/U in their last seven games, back the Over again on Friday.

Did you know that if you parlayed this week’s CFL Argonauts vs. Alouettes picks, you could win $26.45 on a $10 bet? 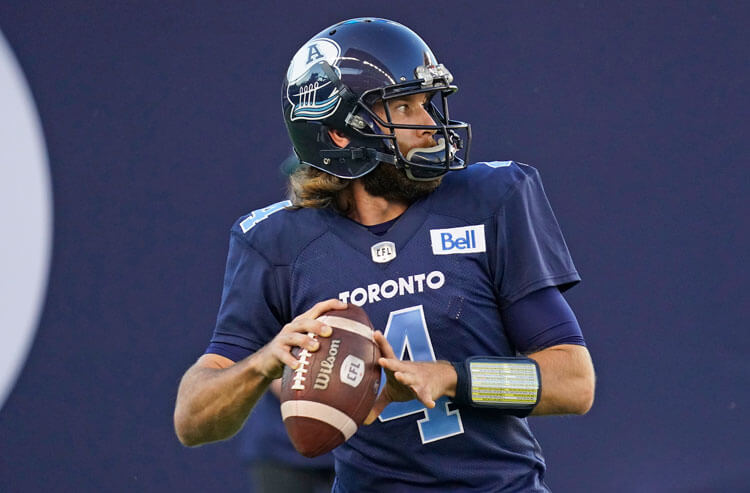 Roughriders vs Tiger-Cats Week 16 Picks and Predictions: Ti-Cats Cruise Into Postseason
Rohit Ponnaiya | Nov 16, 2021
About Us
Contact Us
Careers
Our Team
Brand
Testimonials