Just a few short months after her tight loss to Katie Taylor, Amanda Serrano is getting back in the ring as a massive -2,100 favorite. As our betting picks explain, Serrano should cruise to victory and there's nothing Sarah Mahfoud can do to stop her.

Amanda Serrano vs. Sarah Mahfoud is scheduled for 10 rounds for the undisputed featherweight championship this Saturday, September 24 at the AO Arena in Manchester.

Serrano hopes to bounce back after a disappointing loss to Katie Taylor by becoming an undisputed champion at the expense of the undefeated Mahfoud.

Serrano is the biggest favorite of the weekend at staggering -2,100 odds. Mahfoud leaves the confines of fighting from home to unseat one of the greats and will have to do so as a +1,000 underdog.

Check out our best betting picks and predictions for Serrano vs. Mahfoud.

Picks made on September 21. Click on each pick to jump to the full analysis.

After Serrano’s team failed to get a rematch with Taylor, the Puerto Rican slugger opted to return to featherweight and a chance to win the undisputed title. The narrow loss to Taylor left her no worse for wear, or at least that’s the going thought as she faces IBF champion Mahfoud. Mahfoud is undefeated in 11 fights but is taking a huge step up in class against the living legend.

“The Real Deal '' will no doubt go down as one of the best punchers in women’s boxing history. Even moving up two divisions, she was able to mark up the bigger Taylor without losing any speed or endurance. Aside from her power, Serrano is a smooth operator and sets up her power shots smartly and efficiently.

Mahfoud may have a title, but has yet to earn the distinction of “champion.” The Copenhagen-based fighter was elevated to a full champion status after defeating Karen Carbajal two years ago. She recently defended it against Nina Meinke last April with a decision win. Only five of Mahfoud’s opponents have a winning record, and she has never fought outside her native Copenhagen ahead of the biggest fight of her career.

With Serrano still fighting at a high level and Mahfoud being a virtual unknown, this could be a showcase fight to draw Taylor back into the fold. Mahfoud isn’t a bad fighter by any means, and she also doesn’t have the weight of a long career weighing her down. As Serrano continues to go up and down the scales, her body won’t be able to keep up with her ambitions for much longer.

Even so, it took a world-class fighter to hand her the second defeat of her career, and not a clear one at that. Unless Mahfoud ends up being better than what oddsmakers suggest, this could be a short night for Serrano.

Mahfoud has little stylistically that can be a cause for concern, so Serrano being a comprehensive favor is no oversight. We’ve seen Serrano fight and continue to excel to levels of success that solidify her status as an all-time great, and Mahfoud hasn’t done much to show she’ll be a threat at what could be Serrano’s best weight.

From what we’ve seen from Mahfoud, she has a good technical base and decent speed. However, she hasn’t been matched with the type of opponents to prepare her for such a task. Unless the strain of a long career causes Serrano to be finished overnight, there isn’t a lot of hope for the underdog.

Add in the extra motivation to bounce back from her tight loss to Taylor and we’ll see a bruising performance from Serrano. We see it as her fight to lose, but there’s no value in picking a lead pipe lock like this straight up.

Of all of the weekend’s bouts, Serrano is the biggest favorite. To find value here, picking Serrano to win by stoppage is the way to go despite only returning -155.

Bettors looking to take in a bigger haul should bank on Serrano overwhelming Mahfoud early, potentially scoring a stoppage between Rounds 3-4. We’re backing that line as the best bet for the fight at +650.

Prediction: Amanda Serrano to win in Rounds 3-4 (+650 at DraftKings) 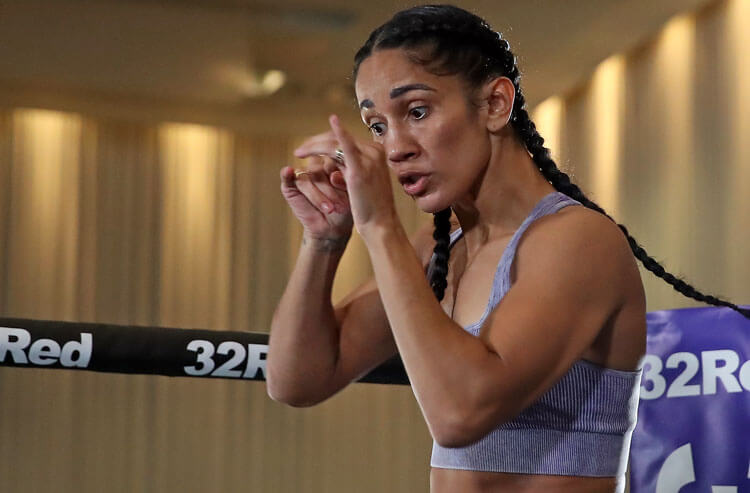