Mayweather-McGregor bets all on the underdog, but that will change say bookies

“They'll pay to see Floyd lose and pay to see him win, but they're always paying. And losing by betting against him.” -- boxing and MMA oddsmaker Joey Oddessa.

In recent months, there’s been enough buzz about a possible Floyd Mayweather-Conor McGregor bout to prompt sportsbooks in Las Vegas and offshore to post odds on the fight. That buzz got a little louder in the past day or so, with UFC chief Dana White indicating McGregor is all in, leaving Mayweather as the sticking point.

So, has all that buzz translated to action and line movement? To a degree, yes, primarily due to the bulk of the action coming on big underdog McGregor. But oddsmakers remain quite skeptical of the fiery Irish MMA fighter.

CG Technology, which operates shops along the Vegas Strip at The Cosmopolitan and Venetian among others, put the fight up about a month ago, with the caveat that it must be held by December 31 for tickets to be valid. The opening line was -1,000 on Mayweather (1/10) and +700 on McGregor (7/1), and that’s still where the numbers are today. But CG vice president Matthew Holt said those numbers aren’t where they ought to be.

“Think about it this way: If Tiger Woods wanted to play Pete Sampras in tennis, Tiger would be saying their two sports are similar, we both hit a ball, etc. But Sampras would be a 1-to-whatever-number-you-want-to-make-it favorite,” Holt tells Covers. “Now, you’ve got perhaps the greatest professional boxer ever against a guy who never boxed professionally ever, let alone as an amateur. The odds on Mayweather should be 1/50, 1/100, but the current reality is 1/10.”

Despite Mayweather’s attractive price as much less of a favorite than he should be, CG isn’t bringing in any revenue on the boxing superstar.

“We haven’t really seen any Mayweather money yet, and I don’t think we will until we have an official date and location for this fight. Those bettors don’t want their money sitting out there for several months, not even knowing if there will be a fight,” Holt says. “What we are seeing is a lot of $20, $50, $100 bets on Conor McGregor, because these people don’t mind taking a shot. They don’t mind being out 50 bucks for a few months, and if McGregor wins, they can just mail in their ticket.”

Joey Oddessa, a highly regarded boxing and MMA oddsmaker, has monitored similar action on the bout and agrees with Holt on the point that McGregor is stepping way out of his league on this, since it will be a boxing match rather than an MMA bout. Oddessa likened the McGregor lovefest to how fans flocked to another outspoken fighter attempting to challenge Mayweather.

“I think back to when Ricky Hatton came across the pond in December 2007,” Oddessa tells Covers. “He had all these drunk fans thinking he actually had a chance against Floyd Mayweather. They bet Hatton down to about 2/1, and you saw how that turned out.”

“Floyd is down to about 8/1, and I maintain Conor McGregor doesn't even have a puncher’s chance in a boxing ring against Floyd. He has none, zero,” Oddessa said. “The money has all been on Conor at about a 4/1 ratio, so the house needs Floyd pretty big so far.”

“A lot of bettors like the bigger payout on McGregor, and I think more people like McGregor than Mayweather,” Greg Sindall, senior oddsmaker for SportsInteraction, tells Covers. “The recent news hasn’t really caused much of an increase in action, but we’ve had a few McGregor bets today. We’ve been hearing for so long that this fight might happen. I’d say the increase in action will come if or when we get news that it actually will happen.”

Holt made a similar point, adding his expectation that all that tightening line movement due to dog money will very quickly head in the reverse direction. He believes that when the date is inked, the price on Mayweather will go up because sportsbooks will actually take bets on the favorite.

Oddessa is surprised the fight has written as much action as it has – one-sided as it is – without having a date or location yet. He believes at least some of the driving force behind the wagers is a desire to see someone knock Mayweather off his unbeaten perch, with a 49-0 record.

“Everyone with a dollar and a dream or any spare change left in their accounts seems to have thrown it on Conor. I think it's more people hoping to see Floyd lose than intelligently wagering any real chance of an upset by McGregor,” Oddessa says. “They'll pay to see Floyd lose and pay to see him win, but they're always paying. And losing by betting against him.” 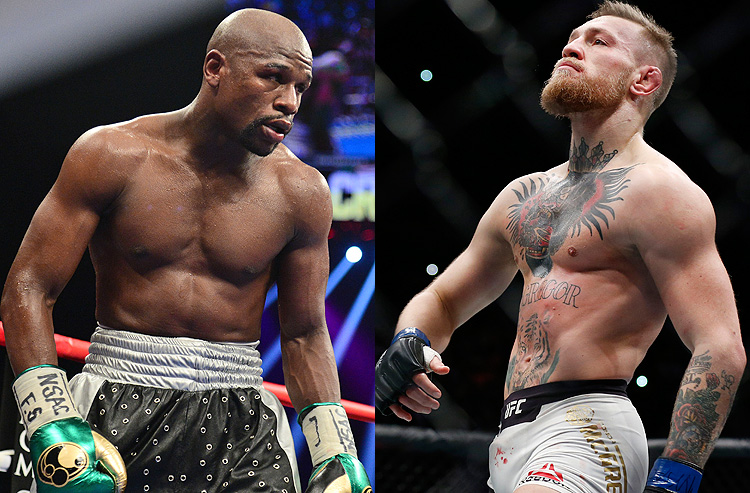 Mayweather-McGregor bets all on the underdog, but that will change say bookies
Provided by