Anthony Joshua will be fighting for the second time since winning his rematch with Andy Ruiz, and is a big betting favorite for this title bout against the undefeated Oleksandr Usyk on September 25. Check out the latest Joshua vs. Usyk odds.

Anthony Joshua vs. Oleksandr Usyk odds are on the board for their upcoming title fight.

Joshua will be fighting for the second time since winning his rematch with Andy Ruiz Jr., while Usyk will take an undefeated record into the bout.

Oddsmakers have installed Joshua as a heavy -265 favorite for the fight, which will be Usyk's first since improving to 18-0 last October.

Here are the latest Joshua vs. Usyk odds for September 25.

Odds for Joshua vs Usyk

Joshua is coming off a ninth-round knockout win over Kubrat Pulev last December to retain the WBA, IBF, WBO, and IBO heavyweight titles. Joshua is 24-1 in his career with 22 wins by way of knockout. His only loss came as a -2,500 favorite against Ruiz in June 2019, although he managed to outpoint him in the rematch six months later.

The 31-year-old is long and rangy with excellent distance management, technical boxing ability, and patience. However, he also has the killer instinct to pounce when he sees an opponent is vulnerable.

Usyk is ranked as the world's eighth-best pound-for-pound fighter by ESPN while also ranking as the fourth-best active heavyweight by the same publication. Usyk has never been an underdog in his professional career and formerly held the WBA (Super), WBC, IBF, and WBO titles at cruiserweight before vacating them to move up to heavyweight.

Since making the move up in weight class, Usyk defeated Chazz Weatherspoon in seven rounds in 2019 before claiming the WBO Inter-Continental heavyweight title with a unanimous decision win against Derek Chisora last October. The 34-year-old Ukrainian is a perfect 18-0 in the ring with 13 wins coming by knockout.

Anthony Joshua vs Oleksandr Usyk tale of the tape

Joshua and Usyk are scheduled to fight on Saturday, September 25 in a pay-per-view bout that will be aired on Sky Sports in the UK and DAZN in the United States and elsewhere around the world.

What is the undercard for Joshua vs Usyk?

The undercard for Joshua vs. Usyk on September 25 will feature WBO cruiserweight champion Lawrence Okolie put his undefeated streak on the line in his first title defense against Dilan Prasovic, who is also undefeated. There will also be a welterweight fight between Maxim Prodan and Florian Marku, who were originally supposed to fight in August, as well as a light-heavyweight bout featuring Callum Smith and Lenin Castillo. Smith moved up a weight class after a loss to Canelo in his last fight. Two more fights are on the card, including a fight between Campbell Hatton and Izan Dura, as well as a middleweight bout featuring Christopher Ousley and Khasan Baysangurov.

The most common way of betting on a boxing match is by picking the overall winner of the bout. With Joshua being the favorite for this fight, his odds have the minus sign (-) in front of them at -265. This means that bettors would need to wager $265 in order to win $100. A Usyk win would pay out more as he's the underdog at +210. This means that a $100 wager would profit $210.

Where can I bet on Joshua vs Usyk odds? 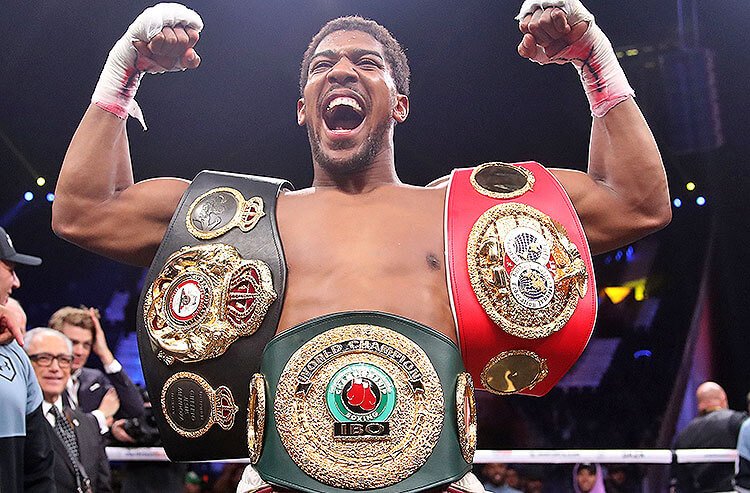