The F1 Drivers and Constructors' Championship races are both extremely tight with seven races to go, as Max Verstappen and Red Bull challenge Lewis Hamilton and Mercedes. Check out the full F1 championship odds for the 2021 season.

F1 betting odds continue to shift back-and-forth, as a season that is delighting fans with one of the best title fights in recent memory continues.

Seven-time champion Lewis Hamilton of Mercedes and Red Bull's Max Verstappen have traded jabs all season in what has shaped up to be the best title fight since 2016, a season in which the championship was on the line all the way to the final corner of the final race.

Verstappen has the edge in race wins, with seven compared to Hamilton's five, but the Red Bull driver has also had more than his fair share of bad luck. Heightening the tension around the championship fight is the multiple racing incidents between the two contenders, in which Verstappen has come out of worse.

After a dramatic end to both drivers' Italian Grand Prix, in which the two collided in an entirely avoidable coming together, the stage was set for Hamilton to reclaim the lead in the standings at the Russian Grand Prix, with Verstappen starting from the back due to an engine replacement. Hamilton did just that, winning his 100th Formula 1 race, but incredibly, Verstappen finished second after a conclusion that effectively turned the entire grip upside down.

The opposite was anticipated at the Turkish Grand Prix, with Hamilton taking a grid penalty and Verstappen capitalizing, but an average weekend for Red Bull led to the Dutch driver finishing second while Hamilton finished fifth. As a result, Verstappen leads the World Drivers' Championship standings on 262.5 points, just edging Verstappen's 256.5.

Though the midfield is tightly packed together and the race for third will be enjoyable to follow, the title race is all Hamilton and Verstappen, and we can expect these odds to shift back-and-forth throughout the remainder of the year.

Hamilton's dominance of Formula One is simply astounding: not only has he won six of the past seven years, but the year he did not win the Drivers' Championship he finished in second place by five points.

Hamilton took the mantle as the sport's top driver from Sebastian Vettel, who won four straight championships from 2010-2013 and finished second behind Hamilton in 2017 and 2018. Hamilton hasn't shown any signs of giving it back to him... or anyone else.

Verstappen's title push will keep Red Bull in the hunt all season, but after Sergio Perez briefly emerged as a genuinely strong second driver, he has failed to factor in at the front of the grid for the majority of the year (though he did a marvelous job holding off Hamilton in Istanbul). For Red Bull to mount a late-season challenge, Perez must regain the form he found early in the season.

Mercedes, meanwhile, will be an interesting team to follow over the remainder of the season. They are chasing their eighth straight Constructors' Championship but have confirmed the departure of second driver Valtteri Bottas, the consummate team driver over the last few years, to Alfa Romeo. If Bottas begins to prioritize his own race on Sundays and does not play the team game as willingly, it could negatively impact Merc's title push. Since his move was made official, the results have been mixed with effortless showings in Russia and the Netherlands a contrast to great races in Italy and Turkey.

Mercedes has won the Constructors' Championship in each of the past seven seasons and is a favorite to do so once again in 2021, with the top two drivers from last year racing for them.

How to bet on F1 futures odds

The most popular way to bet Formula One futures is by simply picking the winner of the F1 World Drivers' Championship. The champion is crowned via a points system based on the final race results of each drive. While the winner is not officially given the title until the final race of the season they can secure the championship with races remaining on the schedule.

Another F1 futures bet is the World Constructors' Championship which is awarded to the constructor (the team that builds the components of the car) who accumulates the most points at the end of the season. In 62 seasons, only 10 times has the winning constructor not been on the same team as the winner of the  World Drivers' Championship.

This means that on a $100 bet, you'll stand to profit $1,200 if Vettel wins the Drivers' Championship. If it's close to the end of the season or one driver is simply that dominant, you might see a minus sign (-) ahead of their odds.

This means that you would need to bet $175 to win $100 on Hamilton winning the Drivers' Championship. 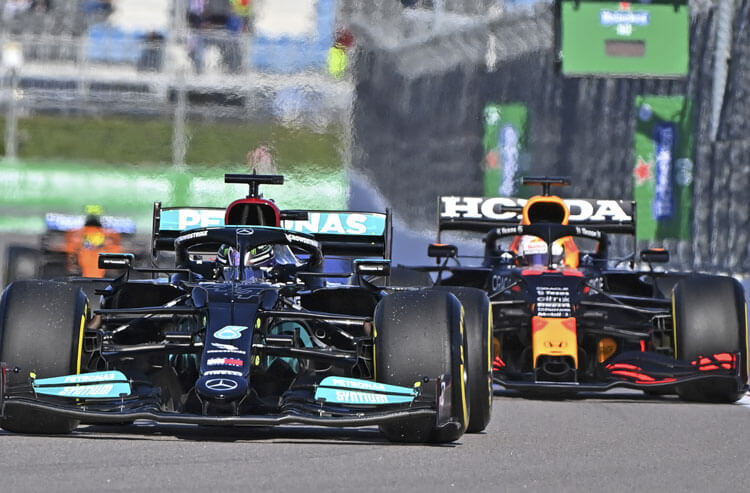