Championship leader Max Verstappen and Red Bull were untouchable last weekend, and with F1 remaining at the Red Bull Ring this weekend for the Austrian Grand Prix, is there any reason to believe he'll be challenged? Check out our odds, tips and picks.

For the second straight week, Formula One odds are on the board for a race at the Red Bull Ring, with Austrian Grand Prix odds available ahead of Sunday's race.

The F1 championship leader has the best odds to win the Austrian Grand Prix, but there is always value to be found in F1 betting odds.

Where is the Austrian Grand Prix taking place?

The Red Bull Ring is one of F1's shortest circuits, with a fast lap typically coming in under 70 seconds, and it's loaded with straightaways where drivers can go flat-out, and high-speed corners, including one into the start/finish straight.

The incredible title fight taking shape between Max Verstappen and Lewis Hamilton in 2021 has already had a few memorable moments, but few were as definitive as Verstappen's Styrian Grand Prix win. From qualifying to race day, Verstappen and Red Bull looked every bit the title-leaders they are. Really, they looked like what Hamilton and Mercedes have been for years: untouchable.

Behind a perfect drive from Verstappen, Red Bull and the Dutchman delivered a statement. Verstappen topped two of three practice sessions and two of three qualifying periods, then crossed the finish line over 35 seconds ahead of second-place Hamilton. His flawless weekend was capped off by a finish line burnout, flexing his title-contender muscles for his celebrating team.

It's almost alarming to see Verstappen as the race favorite (-163) with such a gap to Hamilton (+200) ahead of the weekend. However, it's also correct. Mercedes couldn't touch Red Bull last weekend, and there's little reason to expect an immediate change in the second weekend at the Red Bull Ring. Not only will Verstappen further his championship lead with a second-straight win in Austria, but he'll top both qualifying and race day to leave little doubt — and give us extra value.

A few drivers had frustrating days at the Red Bull Ring on Sunday, but nobody could top the devastation Russell felt. Missing out on Q3 by 0.008 was rough, but that was nothing compared to what was to come. Russell made up ground quickly in the race, getting up to eighth — a wild position for a Williams car in itself — and pushing former championship winner Fernando Alonso ahead of him.

However, mechanical issues would ruin his race, as his first pit stop took 18 seconds in an attempt to cool the car, dropping him toward the back of the pack. Those attempts failed, as Russell would eventually have to retire the car, losing what looked like his best chance to score points for Williams for the first time.

While it will provide little solace to Russell, his brief performance on Sunday was incredibly promising and proved he can get the car up to a Top-10 pace in the Red Bull Ring. Aiding his push for the Top-10 this weekend is that the grid will be using softer tire compounds, which should lead to an additional pit stop, and Williams have been among the quickest pit crews in F1 for several years now.

Russell will get another swing at a Top-10 finish this weekend, and this time, he'll come away with points for Williams.

Love it or hate it, the Styrian Grand Prix was a departure from 2021's competitive field and a return to the processional nature of previous seasons. That meant no competition at the front of the pack after the first few laps, and title-contenders taking their shot at the fastest lap toward the end of the race.

Last weekend, it was Mercedes and Hamilton deciding to quit their pursuit of Verstappen and pit for fresh tires, and they were rewarded with the additional point for the fastest lap of the race. With little reason to expect Mercedes to match Red Bull's pace at this track with such a quick turnaround between races, it will again be Hamilton and his teammate, Valtteri Bottas, left to pick up the scraps in the form of the fastest lap.

While Hamilton (+175) is just behind Verstappen (+150) atop the fastest lap odds board, Bottas offers much better value at +450. The Finnish driver had strong pace last weekend, relative to his teammate, and could easily be in position to pit for fresh tires and a fastest lap push toward the end of the race. With two fastest laps already to his name this season (and a third only missing because of a calamitous French Grand Prix for Mercedes), we like Bottas' ability to pick up the extra point in Austria.

Past winners of the Austrian Grand Prix 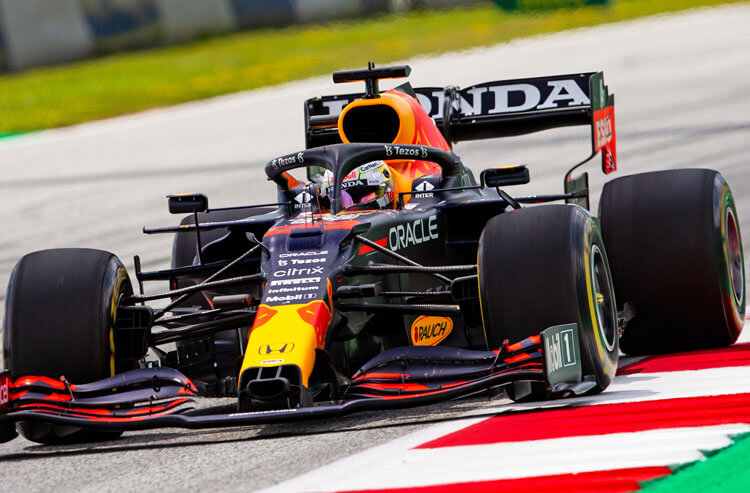