Universal Champion Roman Reigns (-350) and WWE Champion Brock Lesnar (+225) will duke it out in a WrestleMania 38-headlining Title vs. Title match. You can check out more matchup odds in our WrestleMania 38 odds breakdown.

WrestleMania 38 — beginning at 8:00 p.m. ET on April 2 and 3 in Arlington, Texas — will be headlined by a Title vs. Title match between Universal Champion Roman Reigns and WWE Champion Brock Lesnar, plus a SmackDown Women's Championship bout between Charlotte Flair and Ronda Rousey.

A handful of other bouts have hit the WWE betting boards, including Logan Paul & The Miz versus the Mysterios in a tag team match, and Bianca Belair and Becky Lynch, who will tango for the Raw Women's Championship belt.

You can check out the WrestleMania 38 matchup odds below.

The main event takes place on Night 2 on Sunday, with a winner take all unification match between universal champion Roman Reigns and WWE champion Brock Lesnar. The aptly named Reigns is a significant favorite at -350 and is the longest-reigning Universal Champion having held the belt for more than 570 days.

In his last time out, The Tribal Chief defeated Drew McIntyre on the road to Wrestlemania last weekend, running his record to a perfect 7-0 against the Scottish wrestler.

Lesnar is the underdog at +225 and earned the right to challenge Reigns after winning at Royal Rumble earlier this year. He later reclaimed his WWE Championship by outlasting five others at Elimination Chamber in February, setting up the stage for this unification match.

This is the fifth time these stars have faced off in a singles match with each competitor winning two bouts apiece.

These two will take part in a rivalry match on Night 1 with Flair's Smackdown Championship on the line. After a three-year hiatus from WWE, Rousey made a highly anticipated return to the ring at Royal Rumble and outlasted all other competitors, earning the right to challenge the champion of her choice.

She chose to face off against Flair who brutally attacked her with a kendo stick at Survivor Series all the way back in 2018.

Rousey took a hiatus from WWE in 2019 following the loss of her Raw Championship to Becky Lynch at Wrestlemania 35 (a triple threat match in which Flair also lost her Smackdown belt). The former MMA champion is an overwhelming favorite at -600 and if she's back for a long-term stint she boasts some of the biggest star power in the sport.

Flair's current title reign began in the fall when she exchanged the Raw Women's Championship for Lynch's SmackDown title. Since then Flair has defended her title multiple times against rivals Naomi and Sasha Banks.

WrestleMania 38 is taking place at AT&T Stadium in Arlington, Texas on April 2 and 3, with action set to begin at 8:00 p.m. ET.

WrestleMania 38 is headlined by a Title vs. Title match between Roman Reigns and Brock Lesnar. Early oddsmakers have Reigns installed as a -350 favorite.

Following her win at the Royal Rumble, Ronda Rousey (-600) is challenging Charlotte Flair (+350) for her SmackDown Women's Championship belt. 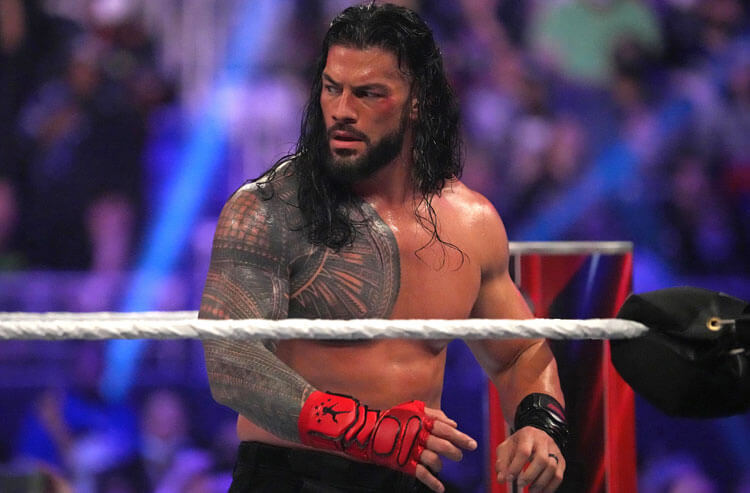