“There are a lot of bodies in the book, and we want to introduce people to different betting options." -- CG Technology.

Patrick Everson
Posted: Mar 13, 2015 9:31 AM ET Updated: Oct 16, 2020 7:16 PM ET
Photo By - USA Today Images
In-game wagering. In-play wagering. In-running wagering. Live betting. However you might prefer to describe it, the ability to bet on games literally while they’re being played is finally beginning to catch on in Nevada’s sportsbooks.

At offshore sites and books around the globe, the explosion came far sooner.

“It’s already past the point of growing popularity. The future has already happened,” said Scott Kaminsky, sportsbook director of TheGreek.com. “I first saw it in 2001. I think it started in Asia. It’s been around a long time. It’s just taken awhile to filter to the North American market, which is always slower to react than the European market.”

Indeed, it was several more years before Las Vegas finally caught the in-game bug, thanks primarily to CG Technology. In fact, it was part of CG’s initial splash in 2009.

“When we first started, we were doing it from the get-go. We offered it at all of our books,” said Jason Simbal, vice president of risk management for CG. “A lot of it had to do with the popularity of it overseas, in Europe. For all the English Premier League games, the predominant wagering is on in-game stuff. Our CEO (Lee Amaitis) spent a lot of time in England and wanted to bring the popularity of that product to the marketplace. It’s extremely popular in England – more than half their volume.”

That’s what got William Hill US into the market, as well – with help from the original William Hill in England. Nick Bogdanovich, director of trading for William Hill US, said that asset was huge as the company rolled out in-game wagering two and a half years ago.

“It’s good to have an established product that we could roll out,” Bogdanovich said. “It’s helped us 100 percent. It’s tried, and we know it works. It’s so big that it’s completely separate here (in Vegas). Two guys do it from this end, and we import it from the UK. That takes a huge workload off us over here.”

And it’s a huge workload across the pond.

“At a lot of places there, the live betting revenue and handle is more than 50 percent of their business, at places in Europe that have been doing it a long time,” Kaminsky said.

Even in its seventh year at CG properties, in-game betting is nowhere near that mark, with Simbal stating it accounts for about 10 to 15 percent of handle. About the same holds true for William Hill US, with Bogdanovich saying it was 10 percent of business in 2014. But both of them can see its popularity growing, mainly on the strength of what’s always been the bell cow for betting in America: football.

“The translation of the product to the game is actually good for football,” Simbal said. “There’s a lot of stoppages, so that you can recalibrate. And there’s enough time between plays and with timeouts for customers to get their bets in, unlike hockey or soccer or basketball. In-running on those types of games, the line, moneyline and total are constantly changing.

Said Bogdanovich, “The NBA changes on the fly, so it’s not ideal. Football is ideal, because there’s all sorts of time.”

But that’s just in America. Kaminsky said soccer remains king for this type of action in Europe and worldwide, even though it doesn’t have the constant stoppages of football.

“Soccer is probably the best sport to lend itself to live betting because of the low-scoring games it has,” Kaminsky said. “You can leave (a line) up the whole game. It’s great for soccer.”

At this time of year, though, March Madness is on many bettors’ minds. Simbal and Bogdanovich are aware of that and expect to have in-game options ready and waiting for the huge crowds that will flood Las Vegas over the NCAA tournament’s first four big days, beginning next Thursday.

“Of the 16 games (both Thursday and Friday), we’re going to do about half of them – a good amount of games each day,” Simbal said. “There are a lot of bodies in the book, and we want to introduce people to different betting options. We’re hoping it does well.”

One reason it might: Bettors won’t want to wait in the huge lines at the sportsbooks’ counters. CG’s in-game betting is all electronic-account based and can be done without going to the counter, from one’s mobile device.

“What tends to happen is there’s just a gigantic line at the betting windows,” Simbal said. “If a customer signs up for an account, he’ll never have to wait again, and we’ll show him all the different things he can do.”

Bogdanovich said the in-game options take the tourney to another level.

“It’ll only enhance the experience,” he said. “It was already great to begin with. This is just frosting on the cake.”

But where does in-game wagering go from there. Kaminsky thinks it has all sorts of potential, even in NASCAR – “You can do anything with it,” he said – and Bogdanovich said golf could be a huge boon.

“I’m sort of biased because I love golf. It’s the only sport I can play, at 52,” he joked. “Before a hole starts, you could bet on birdie, par or other, and there’s constantly changing odds to win it all. Golf doesn’t happen so fast, so it’s perfect. It just makes watching golf more exciting, especially for the majors. Just think of the excitement.

All three of these sportsbook mavens agree the future of in-game wagering is quite bright – something Kaminsky foresaw 14 years ago.

“I love it. As soon as I saw it, I loved it. I thought it was the greatest thing since sliced bread,” he said. “I’ve been yapping about it more than anybody for a long time. It’s going to add more handle and hopefully more revenue. That’s the purpose. You have to keep the product up with what people want. It’s a no-brainer, the best thing of all time.”

Simbal said that technology is the key to the future of in-game betting.

“As technology gets better, it can grow,” he said. “To be able to continually price things throughout games, bets have to be made mobily. If you’re on your account, with a prefunded balance, it’s easy to make that bet. All sportsbook operators have phone apps, and in-running is easier on the phone.

“And on our side of the counter, as technology grows, it’ll be easier to offer more. The system will know where the book is and how to calculate the price. All the human does is adjust it if it doesn’t seem right. The more we can offer, the more things people will bet.”

Another key factor to growth in the U.S.: the likelihood that Nevada won’t have a corner on the sports betting market for much longer, as many states pursue the revenue generator.

“I think it’s gonna be huge,” Bogdanovich said of in-game’s future. “At some point, it’s going to go nationwide.” 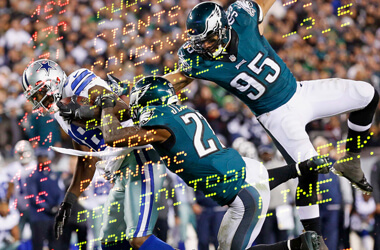