A Top 4 clash between West Ham and Liverpool highlights the Sunday slate of Premier League betting. It's sure to be a tightly contested game, but Liverpool's Mo Salah has repeatedly proven to be the difference in this matchup, as our picks highlight.

After Man City's training session at Old Trafford led to a dull derby from a neutral's perspective on Saturday, all eyes will turn to London on Sunday for the best game of the weekend.

In a Top 4 clash, Liverpool travel to the Olympic Stadium as -138 Premier League betting favorites to face hosts West Ham, whose strong form has continued since last season.

Here are our free picks and predictions for West Ham vs. Liverpool, with kickoff on November 7.

Sunshine and some clouds are forecast for Sunday afternoon in London for Liverpool and West Ham's meeting, with temperatures expected to be around 50 degrees Fahrenheit at kickoff.

The surprise of last season as they finished sixth in the Premier League, West Ham have kicked on in the new season and are taking a higher average of points per game, with 20 points from 10 games so far.

West Ham are a well-drilled team that defends with two banks of four in a low block. Their defensive setup limits goalscoring opportunities considerably, as only Man City (7.4) had a lower expected goals against ahead of matchday 11 than them (10.2).

The Hammers' compact backline is complemented by two versatile box-to-box midfielders ahead of them in Tomas Soucek and Declan Rice, who is quickly becoming one of the best midfielders in the Premier League.

While comfortable without possession, West Ham's array of attacking players — and Rice in the middle of it all — enable them to create going forward at a high rate. West Ham are fifth in shot-creating actions and fourth in goal-creating actions per 90 minutes, while sitting fourth in xG.

Said Benrahma and Jarrod Bowen are both key creative pieces with differing strengths, but it all comes together because of striker Michail Antonio, who has emerged as one of the Prem's most clinical finishers.

Yet, while West Ham are a genuinely good Premier League side, they are coming up against one of the world's best in Liverpool.

West Ham just barely edge Liverpool in expected goals against (10.2 to 11.2) but it isn't a coincidence that the Reds have conceded fewer goals regardless (eight compared to 11) as they're aided by arguably the world's best goalkeeper in Alisson. Liverpool's strong defensive record early on has been despite an early injury for crucial defensive midfielder Fabinho, and Virgil van Dijk still rounding back into form after injury.

However, it's going forward where Liverpool's superior quality really shines. Liverpool were far out ahead of the league in xG entering the weekend, at 26.3, as well as both shot-creating actions and goal-creating actions per 90. Liverpool trail just Bayern Munich in xG across the big five European leagues so far this season and have a real argument as the world's most dangerous attacking team.

Superstar winger Mohamed Salah has played like the best player in the world early in the season, Diogo Jota has continued to fit in seamlessly, and Sadio Mane has regained form after struggling last year.

West Ham have proven their quality repeatedly over the last two seasons and won't be a walkover for Liverpool. However, the visitors are a cut above in both attack and defense this season, had the benefit of playing at home midweek as opposed to West Ham, who traveled to Belgium Thursday, and it was the Reds who were twice victorious in this matchup last season.

Liverpool's Egyptian King is the best player in the world at the moment and well on his way to claiming a second Premier League Player of the Year honor. Salah has already scored 15 goals and added seven assists in 17 games across all competitions, while his goalscoring streak of ten games came to an end last weekend — after he had punctuated it with a hat trick at Old Trafford against rivals Manchester United.

Now two games without a goal, Salah will break that stretch in a quick fashion, as he has averaged one goal per 90 minutes in the Premier League so far this season but just endured a goalless 90 against Brighton last weekend.

In two games between Liverpool and West Ham last season, Salah scored three times, including twice at the London Stadium. His goalscoring record against the Hammers since returning to England is incredible, in fact, with nine goals in eight games and only failing to score in one of those meetings. That record will continue with a goal on Sunday. 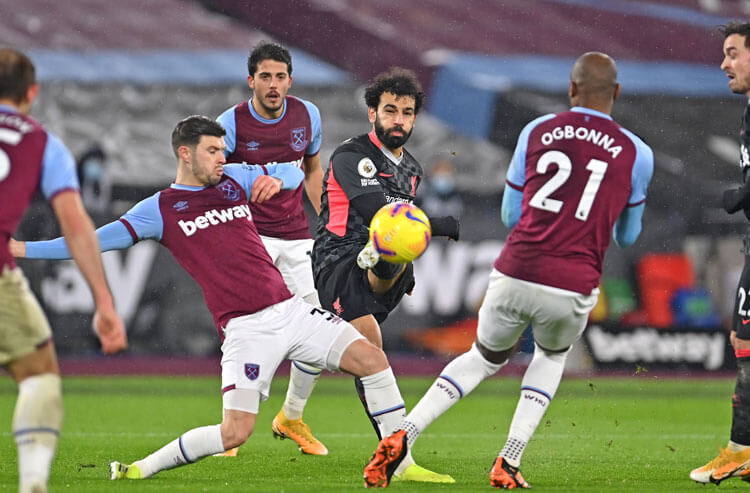 West Ham vs Liverpool Picks and Predictions: Paint the Town Red
Provided by